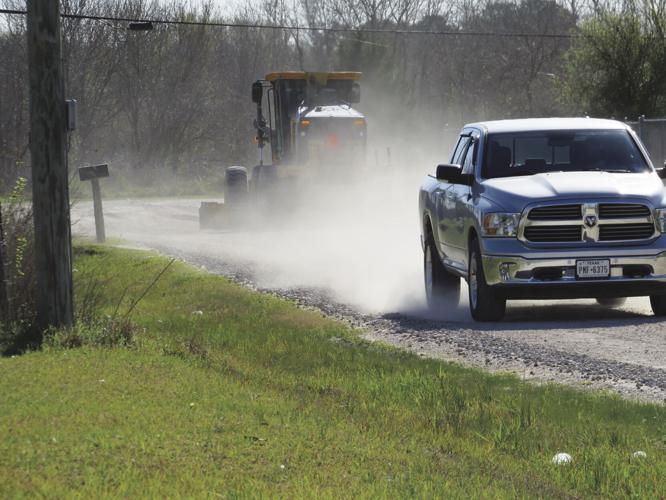 As Brazoria County machinery levels out Greenhouse Road, speeding traffic only adds to the dust that residents must endure. 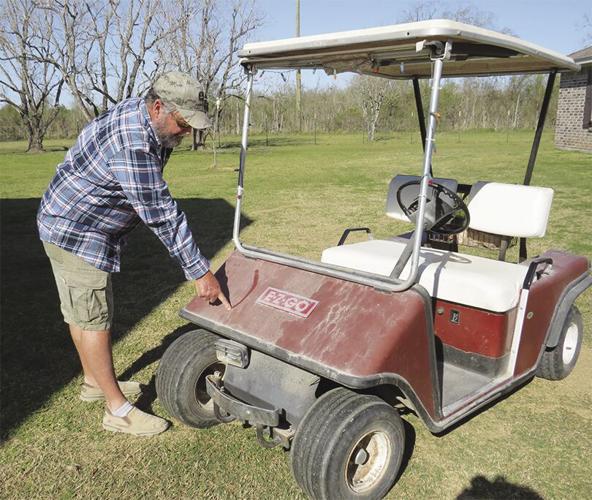 Chuck Brantner rubs a finger across his golf cart to show the amount of dust that has accumulated on it in recent days.

As Brazoria County machinery levels out Greenhouse Road, speeding traffic only adds to the dust that residents must endure.

Chuck Brantner rubs a finger across his golf cart to show the amount of dust that has accumulated on it in recent days.

For years, the residents of a road that was not really a road have patiently tried to follow the process of people, paperwork, phone calls and email, trying to get the road paved-with no success.

Now, as they live on a road that they say is polluting their air from dust stirred up from the roadway being grated, they have received even more bad news.

AmeriWaste, the company that has been picking up garbage in that area, has notified them that as of Tuesday, March 29, they would no longer service them.

Although Chuck Bratner, one of the residents, estimates there are 150 homes in that area,  AmeriWaste says they only pick up for 62 households.

“…due to road conditions and damage to our fleet, we will be ending your trash service…”said the notice.

It went on to say that they “will be happy to continue service post roadway repairs”.

Brantner, who lives on Greenhouse Road, off Hwy. 35, has patiently requested updates on what he has heard since his first email on April 18, 2016.

In that email to Brazoria County Commissioner Stacy Adams, Brantner explained what  the residents faced. “Dust is a huge problem beyond imagination. The Texas Commission on Environmental Quality has been out here in the past two months and determined that it is a severe dust hazard to humans,” his email said.

He went on to say, “Children walk up and down this road to catch the school bus as the people drive by and mercilessly dust them.

“Greenhouse is the main road used to access all of the homes in the back of this area, so it is a constant dust storm as residents go back and forth on a road that has no speed limits enforced and is a severe safety hazard.

“There have been several traffic accidents because of this. Some very serious,” he added.

“The road has huge holes in it at times and the school bus will not even come down here.

“In short, the neighborhood population now is so large that the road is woefully insufficient for the traffic that speeds up and down it daily making it look like a war zone because of the fine dust particles being put in the air.”

Today, Adams says he is satisfied with the way things have progressed since Brantner sent that email.

There was never a “road” originally, just a way for workers to get around on the Denbury Resources property.

Denbury is an independent energy company that developed that entire area.

Since that first email in 2016, Brantner has been in constant contact with Adams, hoping to hear that the road will be paved.

However, with the wheels of government turning slowly, there is no way to know when work will begin.

Adams did say that Denbury was approached to see if they could help solve the problems Brantner and the other families living on Greenhouse Road, as well as on nearby Hastings Road, faced.

Greenhouse Road was partially leased and partially private, and plans have been underway since 2013 to bring it into Brazoria County.

Adams said his two predecessors worked on trying to get the road to become a part of the county since 2009, and that Denbury has been cooperative and generous in providing help.

Denbury has provided the surveying, titles, right of ways and dedicated the road, less than a mile long, to the county, said Adams.

All of the property owners on Greenhouse Road provided right of ways except a piece owned by Exxon.

Denbury bought the property and donated it to the county. They also lowered pipes that were too high for road construction, said Adams.

Originally, the homeowners were expected to put in the money for the new road, but now that it is a county road, that won’t happen.

In 2019, Greenhouse Road was accepted into the county road system.

An agreement between Brazoria County and Denbury includes the company paying 100 percent of the cost of materials, and the county building the roads with their equipment. But, at this point, the work has not begun.

Greenhouse Road intersects with Hastings Road and Hastings Circle, but the agreement does not include them.

The process of making them county roads will have to take place at a later time, said Adams.

Recently, the county did go into partnership with Drainage District 4 to replace a bridge on Hastings, with the county using part of a matching grant from the state to repair the bridge.

Although Brantner and Adams do not see eye to eye on the issue, Brantner says Adams has been supportive.

“The roads out there are better than they have ever been,” said Adams.

“I have heard from a lot of people who are happy to have a smooth road.

“People would rather have a smooth dusty road than a wet, muddy one,” he added.

Bentner and his wife disagree. They want a paved road that will not cause irritation to his asthma, or dust all over his house, plants and vehicles. He said the fine dirt that flies around their yard all the time has even taken paint off a mobile home they have near their house.

Over the years, Brantnere has kept in constant contact with Adams, as well as the Texas Commission on Environmental Quality (TCEQ).

There have been many emails between Brantner and Adams since that first one in 2016.

“Surely as taxpayers on a road with so many residents driving on it something can be done, it’s a hazard,” said Brantner in one email.

He even offered suggestions about what could be done with the road, including Denbury deeding the land to the county.

In fact, that is exactly what happened. The land has now been deeded over to Brazoria County.

“Maintaining it is defined by grading the dust so it makes a better dust storm,” Brantner said.

In July 2016, he contacted TCEQ Environmental Investigator Lauren Ruff, who had been at the site in February and took pictures of what she called “nuisance dust”.

She suggested that Bratner contact the county engineering office and ask for help. “Keep in mind, this is a process,” she said.

She also suggested that if the county were to take over the road, they could put up “No thru trucks” signs which she said would help alleviate the amount of traffic going into the oil fields down Hastings Road.

“We are getting closer but still have some hoops to jump thru. “

As time ticked by, and the year turned into 2018, nothing had progressed.

“I know you’re experiencing a difficult time with the dust but until there is a legal way for the County to move forward it will remain unimproved, he said.

A hopeful Chuck Brantner asked Adams, “Baring any more road grants etc. do you think Greenhouse will be paved this year? My God what a process.”

Adams replied, “The next piece of the puzzle is the replacement of the bridge on Hastings so that drainage work can take place. The bridge has since been replaced.

In June 2019, Adams said there had been multiple meetings and everyone was sharing the needed information with each other.

By December 2021, Bretner’s frustration was evident. In an email, he said to Adams, “We have been corresponding with you about Greenhouse Road about five years and we’re just wondering in your opinion if it will ever be paved? If there is not a great chance of it being paved we need to know so that we can move.

“On another note, can someone slow these trucks down that are hauling dirt to the back where the county guys have been working? They are dusting us to oblivion coming through here at way over speed.”

The dawning of a new year still did not bring any hope to those who live on Greenhouse Road.

Bretner complained to Adams, “We’re doing our best to hang in there till the road is paved but they are still grading it unnecessarily. It’s a living dust hell. Any positive news on the road yet?”

The year 2022 has fared no better. Brantner notified Adams that AmeriWaste, the garbage company, had sent out notices to all the residents that they would cease service at the end of March due to road conditions.

Bratner told Adams, “A reassuring call to them from the county may get them to hang on till the roads are done,” he said.

Adams responded that the county engineer had contacted them and that he (Adams) had not heard an update.

A call to AmeriWaste from the Alvin Sun went unanswered before deadline.

With the clock ticking and no hope for a decent road that they say would prevent the dust from damaging air conditioners, making asthmatics ill and no trash pick up, the residents aren’t sure what more can be done, if anything.