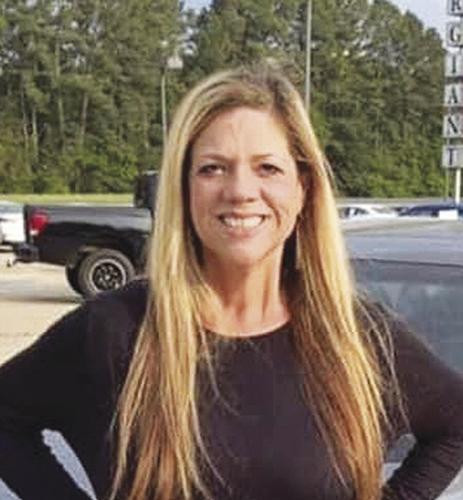 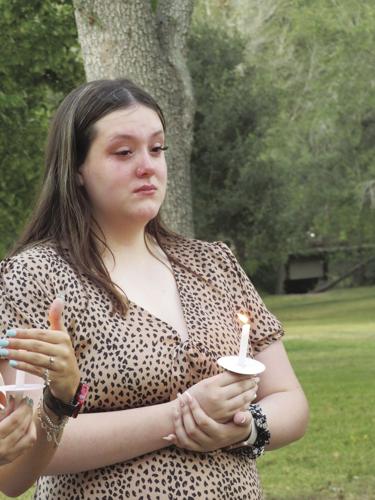 Lila Grace Reynolds stood silently as prayers were lifthed up in the hopes that her mother, Michelle will be found soon. Michelle, an Alvin ISD teacher, disappeared on Sept. 22 and was last seen in Louisiana.

Lila Grace Reynolds stood silently as prayers were lifthed up in the hopes that her mother, Michelle will be found soon. Michelle, an Alvin ISD teacher, disappeared on Sept. 22 and was last seen in Louisiana.

The family of missing Alvin teacher Michelle Reynolds continues to hope and pray that not only can they keep the public aware of their search for her, but that they will find the missing woman soon.

Reynold’s daughter, Lila Grace told the Alvin Advertiser that her sole focus is now making sure her mother returns safely to her home and family.

Priscilla McCarrell, a close friend of the family, recently put together a candlelight vigil for residents to pray for Michelle and her safe return home. McCarrell has known Lila Grace for years, since her daughter was on a cheer squad with Lila Grace.

About 60 people lit candles and bowed their heads at the vigil, as Zac Griggssby led them in prayer. He and McCarrell, as well as Elina Navarrow, who helped organize the vigil, all worked with Michelle at Fairview Junior High School. They have all taken a personal interest in doing what they can to help find the missing woman who disappeared on Sept. 22.

That day, according to Lila Grace, her mother came into her bedroom, sat on her bed, and told her she was going to pick up something to eat, and asked if she would like to go with her.

Lila Grace asked which restaurant she was going to and Michelle said she had not decided yet.

Lila Grace said she was tired from attending a college psychology class, then working a late shift the night before and just wanted to sleep.

A short time later, the 18-year-old changed her mind and decided she would ask her mother to pick something up for her. However, when she called, her mother did not answer her phone.

Her 13-year-old brother had called their father asking if someone was going to pick him up from school at 4 p.m. Her youngest brother, age 11, was with a friend.

At 8:30 p.m., Lila Grace’s dad called her at work saying he had still not heard from Michelle.

“By then, I was panicking,” said Lila Grace. “Where had she gone?”

She told her manager she had to leave work because her mother was missing.

“As soon as I pulled into our driveway, I saw a police car and my dad had filed a missing person report,” she said.

Michelle’s Lexus was located in New Orleans, La. on a city street through the location app on her car.

”We were all wondering, “Why New Orleans? Why didn’t she take any money? How is she getting around?” said Lila Grace-questions that have no answers.

Lila Grace’s grandmother came from Orange, TX. to stay with the other children, while her father left for Louisiana with her 13-year-old brother, met up with her mom’s brother, and they headed to New Orleans.

The two men found the Lexus, parked their cars on either side of it and sat waiting until 4 a.m. hoping Michelle would come back to the car.

They finally went to a hotel to get some rest.

On Sept. 26, Brazoria County Equusearch came to New Orleans and began to help in the search for the missing woman.

The car had been found along the waterway, a few blocks from where a cruise line was docked. Her identification, credit cards and other items were left in her locked car.

There is also a homeless community, with many tents, nearby.  One homeless individual told investigators that Michelle had come to the camp one night and slept outside his tent, and when he left the next morning to get breakfast, she had taken his black t-shirt, left her own blouse and was gone.

Tim Miller, the founder of EquuSearch, said a homeless man told him he had a blanket in his tent and was cold. He went into his tent, got the blanket, and Michelle’s blouse fell out. He then noticed that his shirt was missing.

He said the woman had a package of menthol cigarettes, and Michelle does smoke that brand.

EquuSearch has spent a great deal of money in the search for the Alvin teacher.

“I had a helicopter overhead, and a big boat searching the river, and we got two cadaver dogs. We walked and searched for a long time and never found any identifying information,” he said.

“Brazoria County Sheriff’s department did an excellent job, and they were changing out their deputies and doing their best,” said Miller.

He stayed in New Orleans for five days, and returned to Texas, but sent another crew, which stayed and searched for another three days.

“We are getting several calls of sightings, but every single one was mistaken,” he said.

“If we get one minimal bit of credible info, we will be right back on it,” he said.

EquuSearch has spent thousands of dollars in the search, but money is not an issue. Miller, who suffered the loss of his daughter several years ago, says his goal is to search and hopefully find missing people.

Yet, the boat rental was $2,400; the helicopter was $1,800, and the team paid for hotels, with no discount the entire time they were in Louisiana. “How do you put a price on this? She is one of us,” asked Miller.

Miller said he had to go to the neighboring state and try to find the missing woman. However, he had planned only to set up the search party and return home. He had back surgery and was in a hospital for 18 days. Five weeks later, he was searching for Michelle Reynolds.

When pressed about his health, Miller said he hoped he had not done any new damage where surgeons had worked, but he knows he overdid it during the search. “I just walked and walked, but I couldn’t leave,” he said.

Anyone interested in helping provide funds for the EquuSearch ongoing search for Michelle Reynolds can call the office at 281-309-9500, or mail a check to: EquuSearch at P. O. Box 395, Dickinson, TX 77539.

Meanwhile, Lila Grace and her sibblings wait, with her dad, hoping to hear that Michelle has been found safe and will return to her family.

As the candlelight vigil for Michelle Reynolds began, Priscilla McCarrell, who organized the event, read the following:

“Tonight we light these candles as a symbol of hope for the family of Michelle. We light them to show support together as members of the community that she lives in.

"We light them as a sign of love that we have for a friend, a mom, a wife, a teacher and a co-worker.

"We light these candles in unity tonight for Michelle Reynolds.”