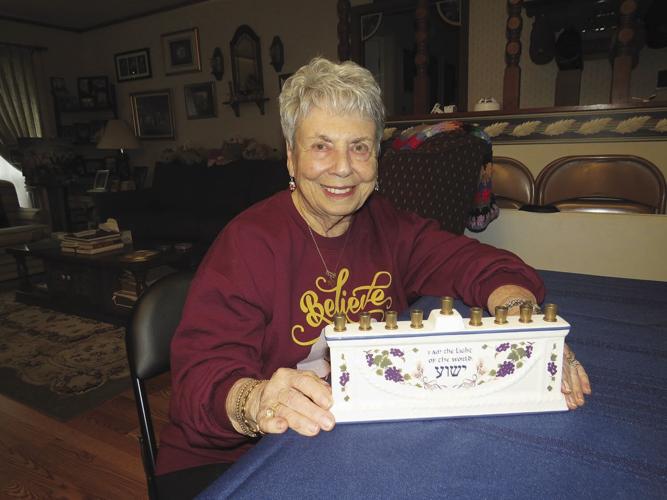 This menorah has the English translation on the front. Lynne Blunck, a Christian, grew up in a Jewish family. 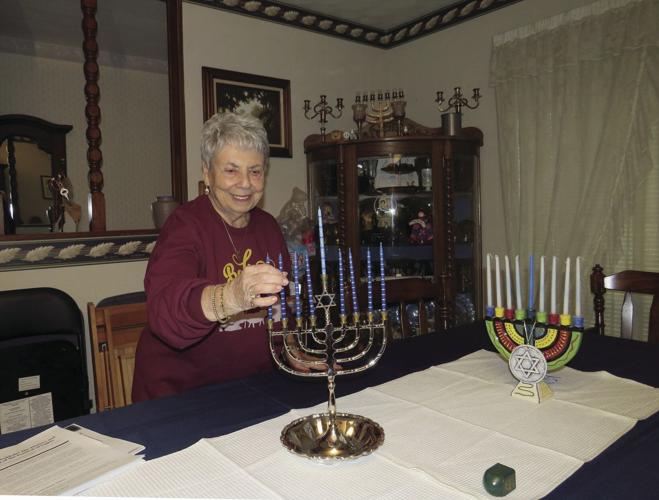 Lynne Blunck, who has a background based on Judiasm lit a candle on the Menorah on Hanukkah.She keeps it in her dining room. The colorful at right was made by her son.

This menorah has the English translation on the front. Lynne Blunck, a Christian, grew up in a Jewish family.

Lynne Blunck, who has a background based on Judiasm lit a candle on the Menorah on Hanukkah.She keeps it in her dining room. The colorful at right was made by her son.

With Christmas only a few days away, most Alvin residents are thinking of Santa, gifts, church, family and a big meal.

At Lynne Blunck’s home, things will be a bit different.

There will still be all the traditional events with her family, her children, grandchildren, and great grandchildren spending the day together.

However, there will be a special time a few days prior to Christmas when Lynn will pause and remember her family heritage.

Raised an Orthodox Jew, she will light the candles on the Menorah that sits on her table, and say a prayer on Hanukkah, Dec. 18 and 19.

Jews celebrate what is also known as the “Festival of Lights” for eight days. Each night, a candle on the menorah is lit, using the taller candle, which sits in the middle, to light them. That candle is called the shamash.

Today, in her Alvin home, Lynne has a seven-branch menorah, which symbolizes the branches of human knowledge. The six candles on the sides are symbolically of the light of God, which is represented by the center candle.

“It can be compared to a cross in a Christian church,” said Lynne. She went on to say, “In the second century B.C., the Syrians took over and didn’t want Jesus, or anyone else who didn’t believe like that did.”

In order to insult the Jews, they sacrificed pigs (a meat that Jews believe to be unclean) on altars, desecrating the belief in the Torah, the book of Jewish theology that called the swine unclean. It allowed Jews to eat only animals which chew their cud, and have cloven hooves. Although pork is the most well-knows food item not allowed on a Jewish table, the Torah also prohibits eating shellfish, lobster, oysters, shrimp and clams. The Old Testament says that only fish with fins and scales are allowed to be eaten.

Hanukkah is often thought of as the equivalent of Christmas, but other than the dates when each takes place in December, and the modern tradition of gift giving, they really have no similarities.

Lynne’s family was made up of “Conservative Jews”, as opposed to Orthodox Jews, who follow strict Jewish tradition.

Her grandparents were from Russia and Hungary, and spoke Russian, Hungarian and Yiddish. But, when they moved to America, Lynne said, they were so happy to be here in the U.S. that they immediately learned English.

She was raised attending a local synagogue, or temple, in New York, but went to public schools. “We celebrated the holidays with a mix of Hanukkah and Christmas,” she recalls of her childhood.

The people needed oil to light candles for eight nights at their temples; but only had enough for one night. A miracle occurred when the oil for the first night provided light for the entire eight nights.

Since that time, the beautiful Menorahs have a place for six candles as well as one in the center, which is above the others. This candle, called the Shamash, means “servant”. Each night during Hanukkah, a candle is lit in Jewish homes across the world. On the last night, the center candle burns until bedtime.

A game called “Dreidle”, which means “a great miracle happened here” is often played during the eight days.

Greek law prohibited Jews from studying the Torah, the Old Testament. When Jews held secret gatherings to study together, they brought along spinning tops, the Dreidle. If soldiers walked by and looked into their windows, the Jews would close their books quickly and pick up the Dreidle so it would appear they were just playing the game.

Although Lynne was raised a Jew, she learned about Christianity and chose that path for her walk with God.

Lynne and her husband Bill, who worked for NASA until his retirement, are now members of First Methodist Church in Alvin.

They have been married 61 years and have lived in Alvin most of their marriage. They are the parents of four children, eight grandchildren and eight great-grandchildren. She and Bill are going to host Christmas at their home, as they did during their Thanksgiving feast.

Hanukkah will begin at sundown next Sunday, Dec. 18 at sundown and end the next night. During that time, Lynne will light her candle in respect of her heritage.

A strong Born Again Christian, she sees many Jews in the Bible. “And, after all, Jesus was a Jew,” she said.