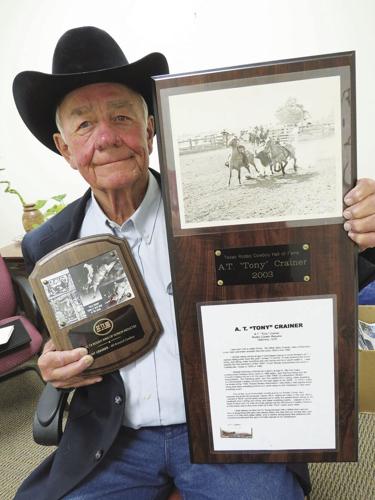 Tony Crainer has been honored several times for his life in rodeo competition. He was presented these by rodeo organizations. 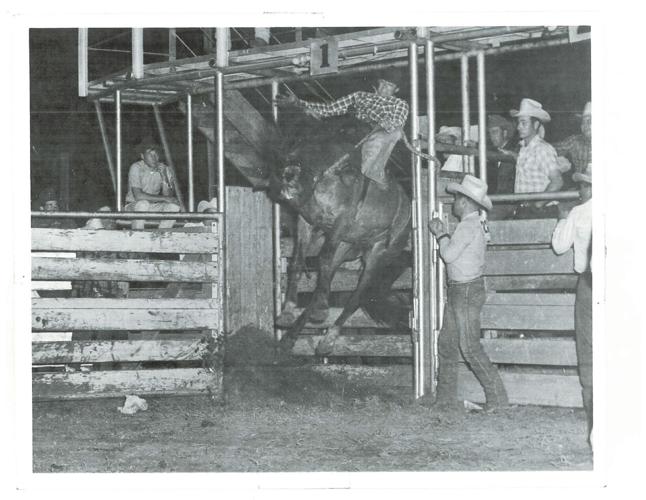 Throughout his career on the rodeo circuit, Tony Crainer had to deal with horses like this one. It jumped feet off the ground before it even left the chute. 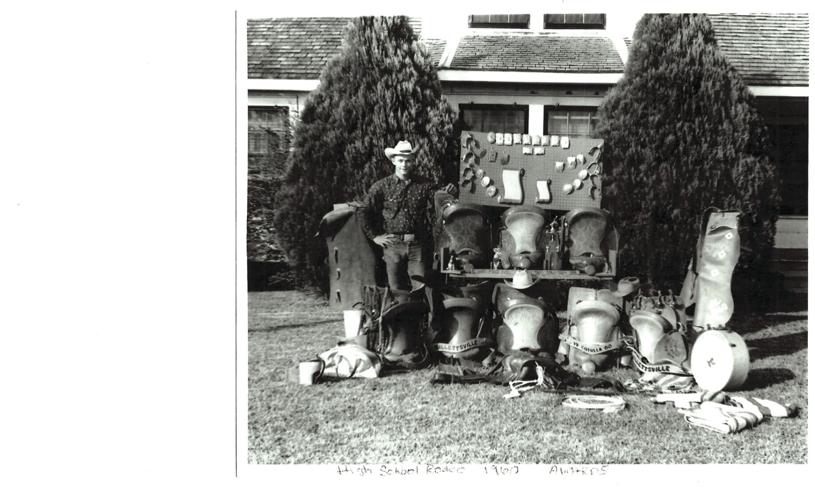 As a young rodeo rider, Tony Crainer won many saddles in competition. The photo above shows only a few of those he won.

Tony Crainer has been honored several times for his life in rodeo competition. He was presented these by rodeo organizations.

Throughout his career on the rodeo circuit, Tony Crainer had to deal with horses like this one. It jumped feet off the ground before it even left the chute.

As a young rodeo rider, Tony Crainer won many saddles in competition. The photo above shows only a few of those he won.

Recalling one experience after another, Tony Crainer’s memory is filled with real life stories of times that are gone, but never forgotten. He has memories of riding bucking bulls and horses, then crawling out of the dirt and doing it all again.

Just looking at a photo of a horse that threw him, or an award for the years he spent living the life of a rodeo man, puts that far away look in his eyes and a smile on his face.

Born into the life of a cowboy, Tony learned from his dad, Allen Crainer, a champion bronc rider and steer wrestler from the early 30s through the 50s. In 1938, his father was named “Champion Bronc Rider”, the highlight of his career in rodeo at the Houston Fat Stock Show.

Born in 1942, the younger Crainer had a sister and brother, when their parents: “Pop” Allen and Genevieve Crainer, moved to Alvin. There, he set up a welding and blacksmith shop where he could do iron work and “sharpen things”.

His son’s life, the fourth generation to rodeo, mirrored his. “My daddy was my idol,” he said. At the age of five, Tony began riding horses. “I started roping calves when I was just a little feller,” said Crainer; and by the age of seven, he was already roping in youth rodeos.

He pauses in his trip back to “those days” to remember a woman whom he said made all the difference in the world in his life. Bobbie Case was his teacher in fifth grade and changed his thinking.

“She changed my life and my attitude and for that, I will always be thankful,” he said.

Case has vivid memories of teaching a young Crainer in fifth grade. “He was a sweet, young boy, but he had a problem with his temper, not in the classroom, but on the playground,” she recalls. One day he refused to go to music class and was very upset. He told Case that someone had called him “yellow”. She talked to him about it and told him that “just because he called you that doesn’t make it so”.

That seemed to make a big difference to the boy, and Case says later he told her he had another problem with a boy on the playground, but, “I didn’t hit him.”

Crainer says she made a huge impact on his life that remains today. Now, he and his wife, Marsha, bring Case vegetables from their garden and says he will help her if she ever needs anything.

He tried college once, spending one semester at Texas A&I. One day, the dean called him into his office and said, “Crainer, you are wasting my time and your daddy’s money here.” Crainer said he would get his belongings together and leave, and he did, destined in another direction in life.

At the age of 18, he went professional. “I wasn’t really scared, I had respect for the animals,” he said.

When he became a man, Tony really began to compete and bring home awards, belt buckles and money. He counts 19 saddles and more than 100 belt buckles as prizes he won over the years.

In 1959, at an Alice rodeo, he won five saddles in the same day, one for each of the competitions he had entered.

He sold some of his saddles to help the family with living expenses. “But, he laughed, five of those old trophy saddles came back home.”

Some were bought by friends who saw his name on the saddles and returned them to the man who had won them in competition.

“If you are good at it, you enjoy it,” he said. “But, you didn’t have a lot of close friends because they are all trying to beat you.”

Of course, the dangers of competing in rodeos is a reality for every bronco and bull rider.

“It’s not if you are gonna get hurt, its how bad,” said Crainer. “I was blessed, I never got hurt bad.”

Bulldogging, or steer wrestling is a skill cowboys have to learn. A steer is released from a chute and the cowboy jumps from his horse, grabs it by the horns and flips it on its side. A timekeeper stops the clock when the ster is completely flat on the ground. The cowboys with the fastest time wins.

He placed in all five events with his winnings gaining him All-Around Cowboy honors.

During one rodeo, while bulldogging a steer, his foot was caught in the stirrup of his saddle. As the horse turned, Crainer says he felt an excruciating pain in his chest.

Although there were no outside injuries, Crainer learned that the  cartilage on his ribs was pulled away from the bones. He inhaled as he recalled the pain and said, “Man, that hurt! But, you live through it, and it mends.”

Later in his career, in Victoria, he was riding a bull and it swung its head back and hit the side of his face. His head snapped back and he felt intense pain. Then, the bull did it again in the exact place. “I’d been rodeoing for 25 years, and I knew it was time to quit,” he said. He was only 37 years old, yet his devotion to rodeoing continues to this day. “I’d go back and do it in a heartbeat,” he said.

Life couldn’t be all rodeo because he and his wife, Marsha, have four children.

A friend told him about a better paying job and he took it for the raise, and was then making $1.50 an hour. “I went over and was told I was the janitor, but with promotions, became a manager,” he said.

He was a machinist for 14 years and then went into sales for the company.

Marsha worked in an attorney’s office in Alvin. Sometimes there would be back-to-back rodeos and Crainer would not get much sleep, because the events went so late into the evening.

He had to work and his wife stepped up and helped him have a successful career in rodeo.

Every weekend, Marsha would rush home and hook up the horse trailer, load the horses, pack up their children, and be ready to leave when he got home. While she drove from a rodeo Crainer would crawl in the back and sleep.

Today, the Crainers have about a dozen cattle, including bulls and steer. He says that is enough for him to handle.

Obviously, he keeps up with steer wrestling when he notes, “The fastest steer today is 3 seconds; I pulled a 2.6 once.”

In 2003, he was inducted into the Texas Rodeo Cowboy Hall of Fame, and then the Central Texas Circle of Honor.

Today, he wears the cowboy hat he won more than 60 years ago.

After so many years, he decided to have it cleaned for his TRC Hall of Fame induction. He knew it was the most expensive felt hat anyone could get back then, but the felt is no longer available. He asked the man at the hat cleaners what it would be worth today. “The man said, ‘If you could get it, probably $600’”.

That put a smile on Crainers face.

“I shall always be thankful for being blessed with a father that I admired, a supportive wife who as always there, that our horses and I got home or to the next rodeo safely, and that I had a strong body that withstood the physical punishment the sport of rodeo placed on its contestants,” he said.