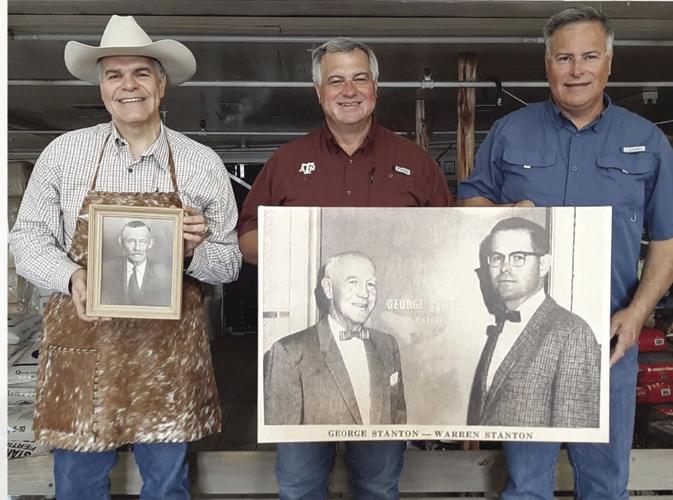 The Stanton brothers hold photos of their father, grandfather and great-grandfather who all worked towards the century of business Stanton has seen. 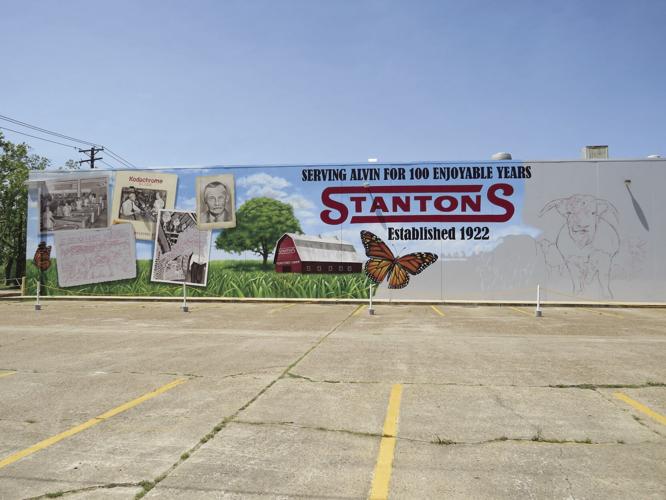 This mural, being painted on the side of the Stanton's building, shows stages of the history of the family and their businesses. The mural will likely be finished by the Saturday 10oth celebration of the company.

The Stanton brothers hold photos of their father, grandfather and great-grandfather who all worked towards the century of business Stanton has seen.

This mural, being painted on the side of the Stanton's building, shows stages of the history of the family and their businesses. The mural will likely be finished by the Saturday 10oth celebration of the company.

The day generations of Stanton family members have been waiting for decades is finally here.

After 100 years in business, the excitement has reached a high with the celebration only a few days away.

On Saturday, May 14, the centennial will include all kinds of fun, as residents stop in to congratulate members of the fourth generation who are operating the store.

Allen, Neal and Paul Stanton have kept the family business operating, each taking on a different, but important part of meeting the needs of their customers.

Over 100 years of photos, news clippings and memories flood the store that has been a landmark in Alvin.

As the company has grown, a few changes have been made, to keep up with customers needs and wants, but the one thing that hasn’t changed is the hands on approach the company started with in 1922.

Customers who walk into any department of the store will almost always see one of the three brothers, talking to customers, finding products they request, or just chatting about lives and family. It’s just the way it’s always been at Stanton’s.

The long, and interesting story about the store began when E. J. and Leah Ann Stanton moved to Alvin with their two children, Mildred and George, in 1909 from Wisconsin.

E.J. was having some health problems and his doctor suggested he move to a warmer climate. They had relatives in Alvin, came here and purchased some land on the north side of Alvin.

E.J. tried different types of work, with some success, but in 1915, a hurricane hit Alvin, and some said that it was worse than the Hurricane of 1900, which hit Galveston, about 30 miles away.

Just like others in Alvin, the Stanton’s suffered a financial setback and for several years, they struggled to survive.

The family was involved in cattle and George and his dad began to buy, raise and sell them, learning the best time of year to buy and sell to get top prices.

Their smart ranching led them to buy more cattle as well as land.

George traveled to Kansas and Oklahoma, following the harvesting of wheat as a laborer, then sending the money he earned home to help his family grow their herds.

One year, with no prospects of a job, George traveled to Wisconsin to work for an uncle. Persistence paid off as E.J. purchased the Coward Wood Yard in 1920. They now had their own business where they bought and sold wood and coal.

Today, that building stands at the entrance of the feed store.

Their new venture was a success! In fact, in 1922, E.J. Stanton and Son purchased four lots adjoining the Santa Fe railroad tracks and opened a feed store.

The icehouse across the street brought customers in as they purchased ice for their family iceboxes.

In 1929, E.J. passed away, shortly before the grocery and hardware, meat market and drug departments opened. His wife, Leah Ann died in 1936 after falling during a trip back to her hold home in Wisconsin.

George married Flora McDonald, the daughter of Scottish immigrants who owned a dairy farm in Alvin in 1924. Their six children included Warren, who would play an important part in continuing the family legacy.

As the years went by, the store continued to expand to include anything a customer might want or need: feed, garden seeds, fertilizer, insecticide, hardware, clothing fabric, shoes, housewares, grocery items, a soda fountain, gasoline, appliances guns, tires and even Studebaker cars were sold!

At the time, quality beef was unheard of on the Texas Gulf Coast, due to the harsh, humid climate. Expert cattlemen said quality cattle could not be raised here, but George Stanton wanted to prove them wrong-and did, raising quality beef.

The big red barn, located on Business 35, was built in the 1930s, and George surrounded it with feeding pens and cement floors and tin roofs.

Now, the cattle that he loved, the red faced, white-bodied Hereford cattle could escape the rain and mud.

During the third Fat Stock Show in Houston in 1934, George took a carload of 15 steer to the competition and won Grand Champion.

He received a record price for the steer, and proved that quality beef could be raised in Alvin. In 1947, he again took his cattle to the Fat Stock Show and once again won Grand Champion.

Between the two wins, he purchased a ranch in the Teas hill Country, outside Johnson City where he raised his cattle. His son, Warren worked the ranch fro 1945 to 1956 showing the cattle, and earning many championships around the country.

Fast forward to the late 1980s and the Stanton’s were among the first members of the American Braford Association, which registered cattle of Herford and Brahman percentage.

The family showed the National Champion Braford bull at the 1997 and 1999 Houston Livestock Shows, both born and raised in Alvin.

Back in 1956, Warren joined George helping to operate the family store as the two led the expansion and remodeling of the entire store.

Along with the change in the look of the store, was a name change. From E.J. Stanton and son, it now became what it is now called,” Stanton’s Shopping Center”.

The configuration of the store you see today was due to the company’s expansion in 1973. A modern and complete grocery store, as well as meat and produce departments, were added at that time.

The hardware, with gifts, appliances and building material was doubled in size. The feed department increased its varieties of feed, lawn and garden and insecticides as well.

George died in 1984, after being involved in a car accident. His larger than life personality, and his slogans for the store were just a part of what the store, and Alvin lost.

Among the slogans he created were: “Stanton’s-Six Big Stores in One” “Most of the Best for Less” and “If We Don’t Have It, You Don’t Need It”.

He never met a stranger and donated to many local, worthy causes. His wife, Flora, lived at the Stanton house next to the big red barn until she was 100 years old in 2002.

When Warren’s three sons came to work for the company, Allen went to the grocery department, Neal to feed, Paul to hardware and George to the Johnson City Ranch.

As the pages of the calendar flipped, the company changed with the times. Today, deer and wild game processing sausage manufacturing,  as well as exotic and marinated prepared meats, with a USDA-approved plant were built in 2006.

The hardware department bolstered its inventory of plumbing, electrical and water well equipment, which sold items, and provided free, expert advice, for the do-it-yourselfers.

Over the years, the family-and Alvin-have seen many changes in the way business is done, but that one special ingredient has never changed. Stanton’s started out with customer service as a priority, and that one ingredient remains the same.