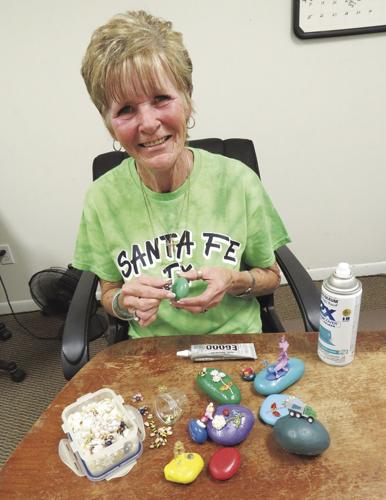 Rocks are her passion. LaDelle Verm has painted thousands of rocks and left them for people to pick up and keep. 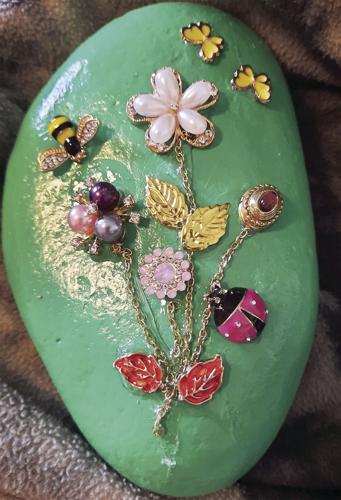 Using broken jewelry or decorations people give her, LaDelle Verm creates all kinds of designs on rocks she paints. 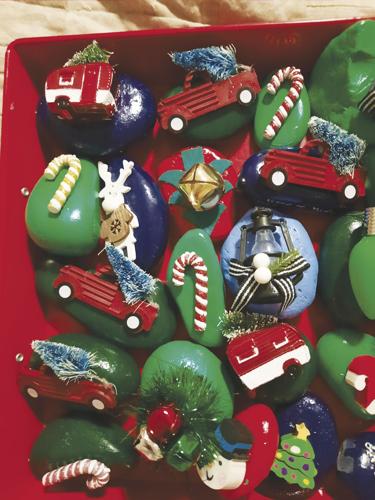 Holidays are very special to LaDelle Verm because she decorates rocks that she shares with everyone for finds them.

Rocks are her passion. LaDelle Verm has painted thousands of rocks and left them for people to pick up and keep.

Using broken jewelry or decorations people give her, LaDelle Verm creates all kinds of designs on rocks she paints.

Holidays are very special to LaDelle Verm because she decorates rocks that she shares with everyone for finds them.

Its about so much more than rocks. But, it IS about rocks-and making people, including herself, happy.

LaDelle Verm is known for the brightly colored rocks she paints and decorates, then leaves around Santa Fe and Alvin.

Seeing the joy on people’s faces when they discover one of her rocks has always been a true pleasure, but even more so in the last month.

LaDelle just learned that she has colon cancer, and is still undergoing testing to learn more before treatments begin.

Not allowing the diagnosis to interfere with her passion, “The Rock Lady” continues to paint and distribute the rocks in a variety of places, from parks to outside stores. Sometimes she sits in her car and watches the reaction of the children, teen and adults who pick them up, and she smiles.

“If I can give someone 10 seconds of happiness with a rock, then, I am happy,” she said. “It makes me feel good to see the expressions on their faces change.”

One time, when she handed a rock to a lady, the woman cried, saying she wanted and needed something happy that day.

A former resident of Alvin, and other parts of Brazoria County, 65 year-old LaDelle now lives with her sister in Santa Fe.

After a career as a secretary and material parts testing reporter, she retired and found her new love…making people happy through rock art.

“It’s like playing Hide and Seek all year round,” she said. But, LaDelle doesn’t hide her treasures, she puts them in places where people can see and take them.

That “junk jewelry”, broken earrings, pendants without clasps, and loose beads that we all have are pieces of future art to her. She loves when people are kind enough to donate to her rock designs.

Since she has not had a lot of donations, she has been buying items she can put on her rocks, including small toys for children.

The process she follows is not fast, nor cheap. She buys 30 pound bags of rocks, and uses a type of double spray paint so that she doesn’t have to repaint them. That paint is more expensive than the paint that is used in a single cover. But, LaDelle says it is well worth it not to have to recoat the rocks a second time.

Once one side is dry, she flips it over, paints the back and then allows it to dry.

Her creativity kicks in as she scans the beads, pins, earrings, toys and other things she has purchased or been given, ready to create a rock that will become a keepsake for the finder. “I create as I go,” she said. She estimates that in the last two years, she has made over 1,000 rocks, using 10 different colors of paints.

She says that one can of paint is able to cover 40 pounds of rocks, and paints several rocks at a time.

That way, they are competed in different stages at different times. She laughs when she confesses that she has spent thousands of dollars on the materials she needs, but says it is well worth the expense to bring just a moment of joy to someone’s life.

On the back of each rock, she writes: “Keep or Hide. Post on Santa Fe Texas Rocks on Facebook”.

That gives her, and other rock painters, an idea of where their rocks have been found.

“Most people don’t re-hide them, they keep them,” she said. She also posts pictures of rocks on Facebook so people can see them.

LaDelle says she places most of her rocks in Tranquility Park in Santa Fe because so many people visit there.

The park was built in remembrance of the students and teachers from Santa Fe High School who were killed in a school shooting in 2018.

LaDelle decided to create a special series of rocks in memory of those who lost their lives that day.

Since Santa Fe High School’s mascot is the Indian, she began to put together a series of rocks with feathers on them. She then put the name of each of the victims on a rock and, if they were a football player, put their jersey number in the corner.

When she was finished, she went to the park where a cross stands for each life lost, and placed a rock near each of them.

Two parents have thanked her for the unique memorial.

But, LaDelle isn’t looking for thanks. She hopes family members will pick up the rocks and treasure them-or leave them in place as a part of the memorial to their child.

After suffering from severe abdominal pain on her left side, unable to walk or eat, and dehydrated, she went to her doctor and after initial tests, on Aug. 3, she was diagnosed with colon cancer with lesions on her liver, gall bladder and bile duct.

As she begins her fight against colon cancer, LaDelle says she will continue to create rocks-and joy-for as many people as possible.

She has been scheduled for more testing, but her doctor believes it was caught early. “It’s in God’s hands,” was LaDelle’s first reaction. “I will handle it when the results come in.

“This isn’t going to stop me, I have to keep going because there are too many people to make happy,” she said with a smile.

The night she learned her diagnosis, she admits that she cried, but then, “got over it”.

She says recalling what people have told her since she started creating her art on rocks gave her the ability to get up and get busy, painting and designing rock art.

She is even recognized by adults and children when she shops or is seen around town.

One lady told her she had “all of Santa Fe”, while a child saw her and said,” that’s the rock lady!”