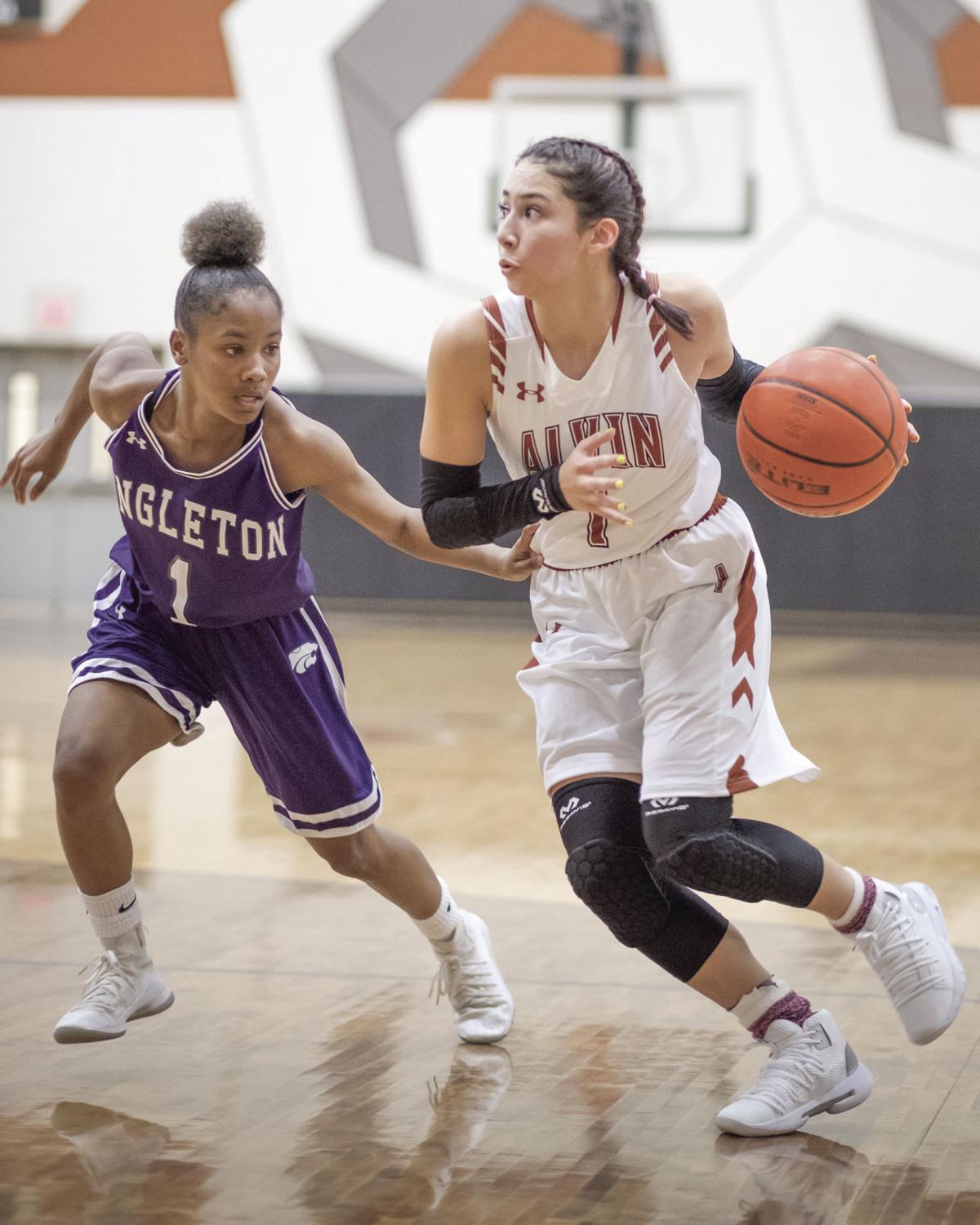 Lady Yellowjacket Andreea Mancha (1), right, drives to the goal being guarded by Angleton's Akira Royston (1) during non-district action on Nov. 2 at AHS Competition Gymnasium in Alvin. Mancha earned MVP honors in 24-6A after the leading the league in scoring. 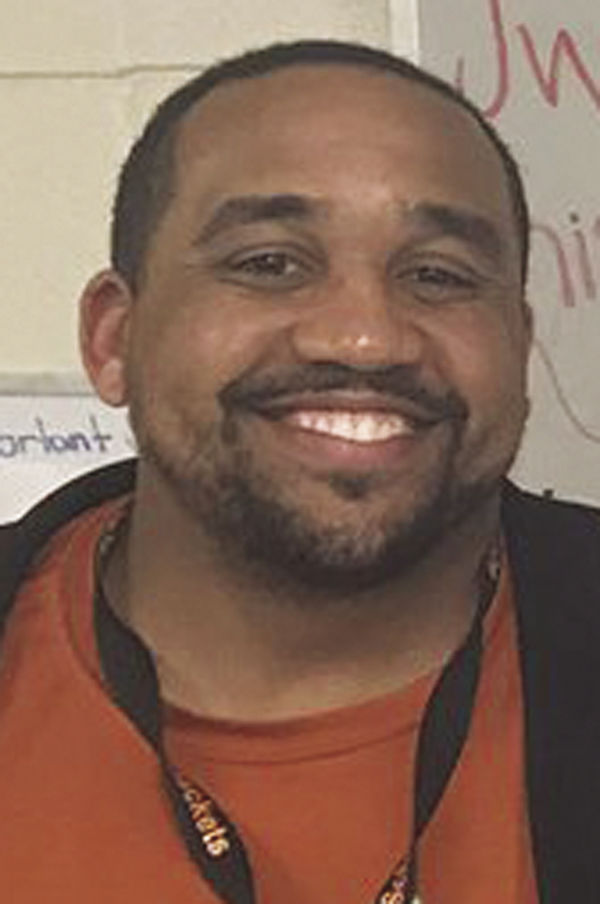 Lady Yellowjacket Andreea Mancha (1), right, drives to the goal being guarded by Angleton's Akira Royston (1) during non-district action on Nov. 2 at AHS Competition Gymnasium in Alvin. Mancha earned MVP honors in 24-6A after the leading the league in scoring.

Andreea Mancha’s shoes didn’t fit back in 2016 and the then-Alvin Lady Yellowjackets’ freshman admits she was terrified to tell her coach about the dilemma.

However, Mancha ultimately summoned enough courage to confide in Justin Walker as the girls’ basketball season was winding down.

“It was my last game and I finally told him (Walker) I needed new shoes,” Mancha recalled. “He was so open to the idea. He definitely grew on me.”

While the current 24-6A most valuable player and coach of the year can now both joke about the matter three years later, there’s no mistaking the special bond it created between player and coach.

The bond not only paved the way to Alvin getting back into the playoff conversion with three postseason appearances in the last four years, it brings Walker to nearly tears for another reason.

“Andreea is the first player that I’ve ever coached all four years on varsity,” said the Lady Jackets’ coach, who just completed his seventh year at the helm. “When you reflect and think about all the growth and seeing her and myself and kind of where she started to where she is now, it does make you emotional thinking about her leaving and going on (to college), which is great for her.”

The shoes may not have had the initial proper fit for Mancha, but Walker remembers seeing an individual who possessed plenty of raw talent from the beginning.

“You could tell she was good, never afraid and quick as a freshman,” he said. “But she learned a lot. She had the shot that would touch the top of the gym and come down when she shot and she only had her right hand.

“You fast-forward now, though, and this girl has scored over 1,300 points (in her career). Just the shots she has taken and made and she’s done it against the best in the city of Houston. It’s unbelievable.”

Walker pointed to two games during Mancha’s freshman year, where the Lady Jacket point guard’s potential took both immediate and future growth steps - a 25-23 regular season win over Pasadena Memorial and the 88-35 defeat the Lady Jackets suffered to North Shore in the bi-district playoffs.

“Against Memorial, Andreea made a big play, got a steal and then stepped out of bounds,” Walker said. “It was in the crucial moments (of the game) and we were trying to make the playoffs. She made this mistake and you could tell when she got back to the bench (during a timeout), she was emotional, feeling that she had let us down.

“I thought about taking her out, thinking she was a freshman and maybe the moment was too big for her. But there was just something in my ear telling me to keep her in the game. She then took the ball out and made the pass to Jada (Rhodes), who made the game-winning layup.

“When we then played North Shore in bi-district, their guards took the ball from Andreea a few times. We did the best we could, but we ended up losing to them by 50 or 60 (points). They were just on another level. We played them again at the Conroe Tournament during Andreea’s sophomore year, though, and those same guards didn’t take the ball from her. She had really worked on her game and just those small things you see as a coach, you could see the progress in a big-time way.”

The progress eventually caught the attention of the Houston area hoops’ crowd during the 2018 playoffs. Mancha pumped in seven treys and 20 points in a 49-42 Alvin bi-district upset victory over Pearland and followed with a game-high 29 points against Goose Creek Memorial, leading the Lady Jackets to a 58-48 second round triumph. Despite Alvin next falling to Summer Creek in the region quarters by a 49-34 count, the 5-6 guard continued to dazzle with a team-high 19 points.

“It was more of a patience thing for me,” said Mancha, who earned both Houston Chronicle All-Greater Houston Area and All-Region III-5A honors from the Texas Association of Basketball Coaches last season. “I had to learn it wasn’t about me. It was more about the team. It was a group thing. If I got better, the team got better.”

Even with the opposition probably knowing who would be handling the basketball in the game’s closing minutes did nothing to stop a relentless Mancha drive in the paint or unnerve the senior during a crucial trip to the charity stripe.

Mancha practically carried the Lady Jackets on her shoulders by scoring 12 of her game-high 27 points in the fourth quarter to help Alvin survive a 54-50 home squeaker with Clear Brook on Jan. 8 and two weeks later, she sank 6 of 7 free throws during the final period to lead the Lady Jackets to a 42-40 comeback triumph over Clear Creek here Jan. 22.

Both victories led to Alvin securing the district’s fourth playoff seed for the second straight year.

“When Andreea does these things like the fourth quarters against Brook and Creek and hitting seven three’s against Pearland last year in the playoffs, they aren’t really surprising to me, because she’s done those things over and over here,” Walker said. “She’s just been able constantly to make the big play at the right moment and also do it when she’s tired and mentally drained.

I’ve played on high levels and when you’re able to do that and not get subbed out, that says a lot. If I want a particular player to win a game, I will pick her every time.”

Walker’s impact on the AHS girls’ hoop program hasn’t been lost on either his bench peers, who selected him as 24-6A’s top coach in both 2018 and 2019, or players like Mancha, who considers him a “second father.”

Prior to Walker’s arrival in 2013, Alvin suffered through single-digit win campaigns from 2008 to 2012. The Lady Jackets have now made four playoff appearances under Walker and three in the last four years.

“It’s very hard to talk about him as far as leaving,” Mancha said. “He’s guided me through both basketball and my lifestyle. I’m definitely going to miss him in the future.”

Walker gives equal credit to both his coaching staff and Mancha for the strides he’s been able to make during his tenure here.

“I got really good coaches around me whom I’m constantly in their ear about what we can do,” Walker said. “The coach of the year is a great honor, but it’s  really a program thing. Andreea has also made me look really good out there. When I draw something out, she saves my butt.

“She has worked so hard to make Alvin relevant again.”