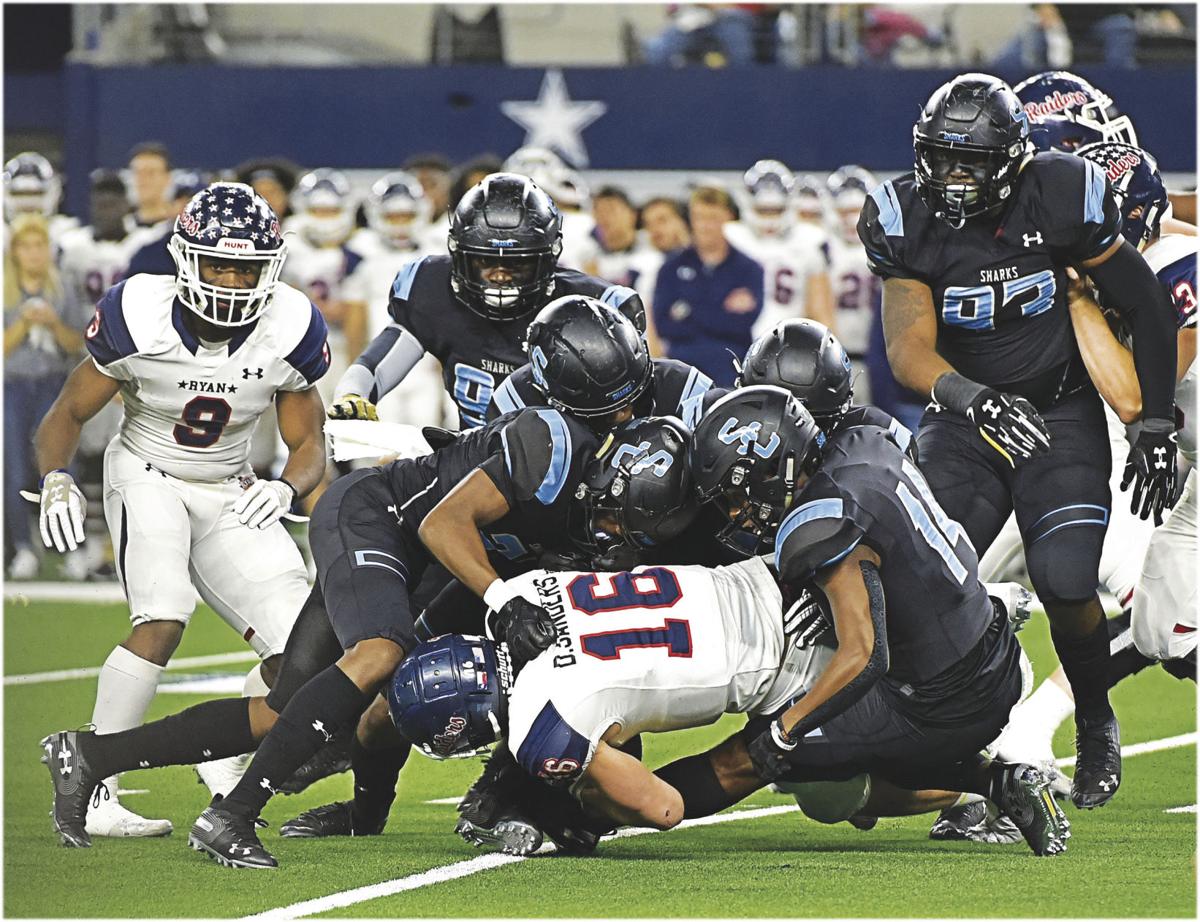 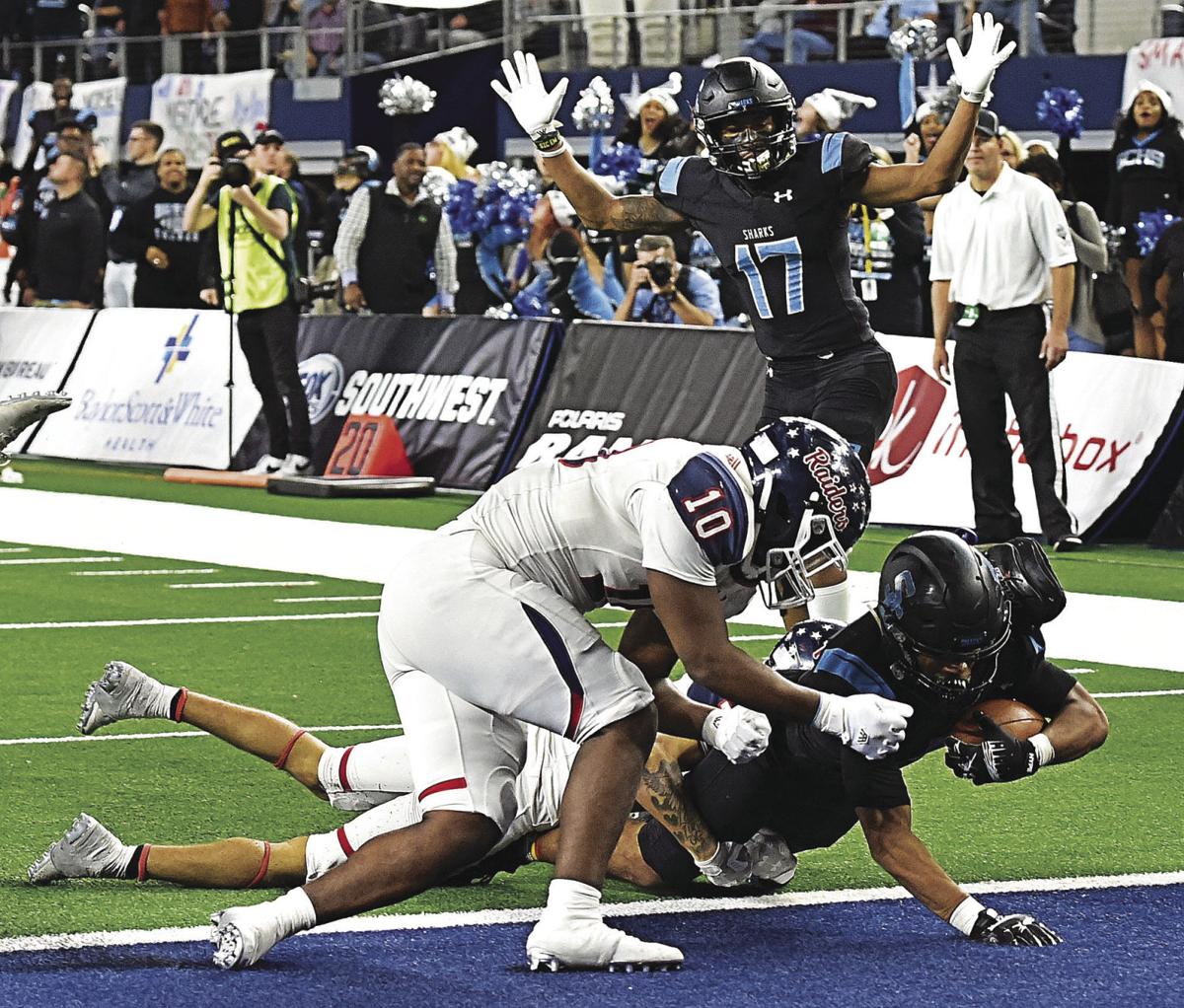 Kelvon Brown crosses the goal line in the fourth quarter for a Shark touchdown, as teammate Seth Jones (17) celebrates. 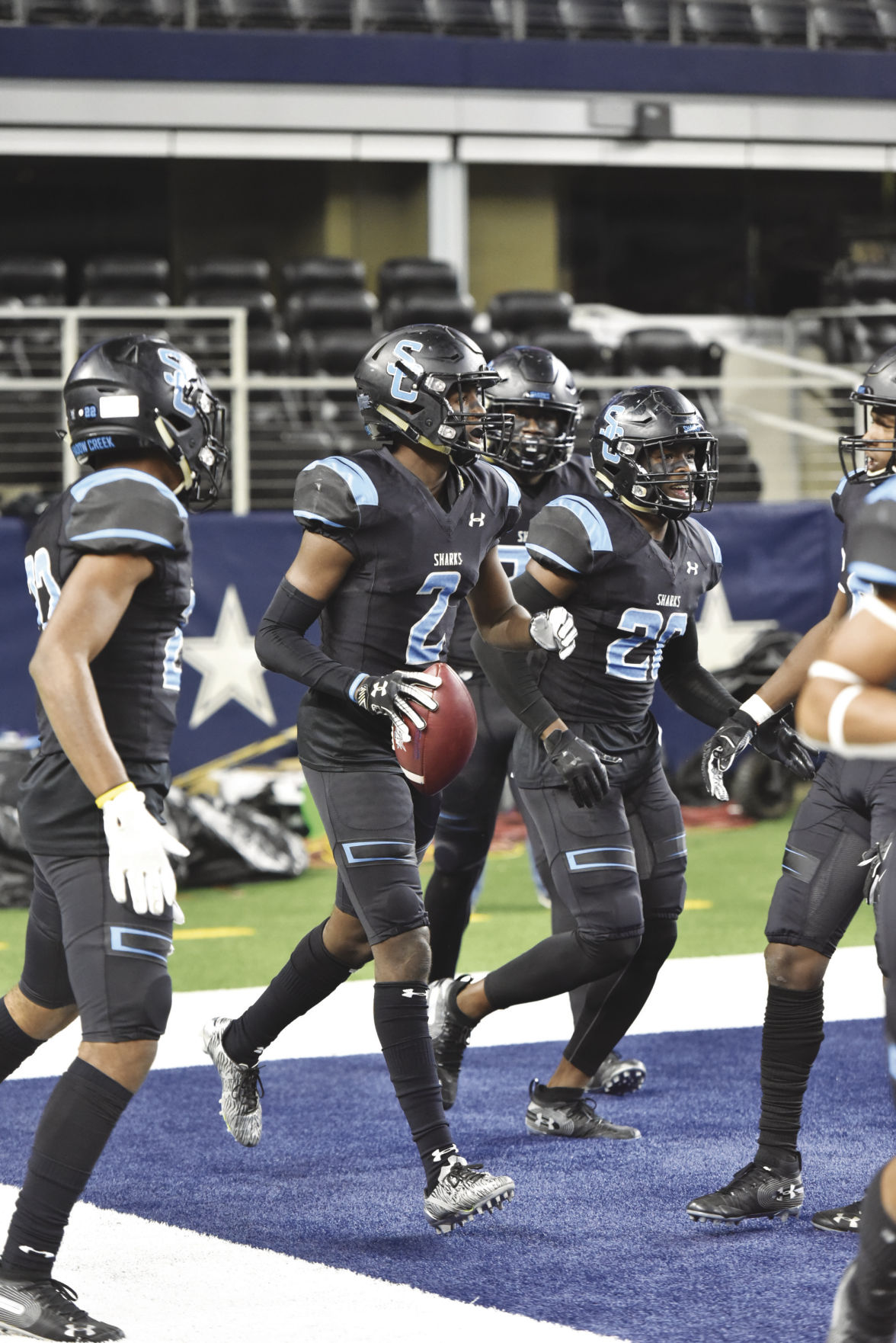 Randy Masters (2) celebrates with his Shadow Creek Shark teammates following the sophomore alertly picking up an illegally kicked ball by Denton Ryan during the second quarter and returning it 37 yards for a touchdown in Friday's state title game at AT&T Stadium in Arlington. 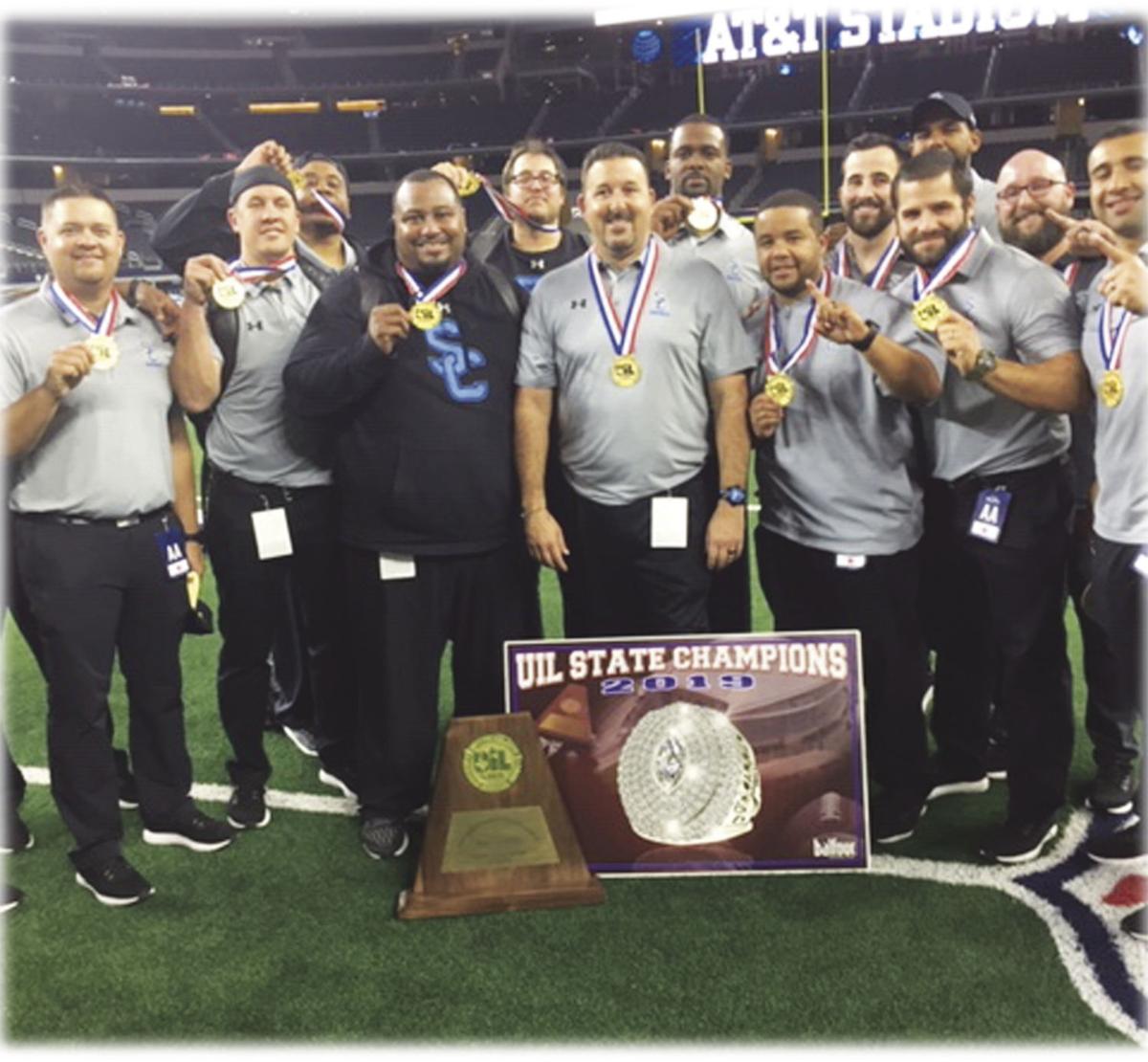 Kelvon Brown crosses the goal line in the fourth quarter for a Shark touchdown, as teammate Seth Jones (17) celebrates.

Randy Masters (2) celebrates with his Shadow Creek Shark teammates following the sophomore alertly picking up an illegally kicked ball by Denton Ryan during the second quarter and returning it 37 yards for a touchdown in Friday's state title game at AT&T Stadium in Arlington.

ARLINGTON - The resume is now complete.

Shadow Creek added the only chapter Friday night that had been missing from already one of the most remarkable runs for a second year program in Texas high school football history.

The Sharks outlasted Denton Ryan in a 28-22 Class 5A Division I State Championship game thriller at AT&T Stadium to capture both the first state team championship in school history and also the first football crown in Alvin ISD history.

Avenging their only loss in last year’s title game didn’t come without some anxious late moments for Butler and company, though.

Ryan moved from their own 19-yard line to the Shadow Creek 25-yard line and almost pulled off a miracle on the game’s final play with two seconds remaining. Just as the Raiders’ Drew Sanders was about to come down with a “Hail Mary” heave from Seth Henigan in the end zone, however, Sharks’ linebacker T.J. Marshall jarred the ball loose from Sanders’ grasp to preserve the victory.

“It was rough, I was definitely holding my breath,” Butler said about the final play. “I was just hoping that thing would end up on the right side.”

The Sharks’ defense held Ryan to a season low 250 yards of total offense.

“Both sides came in playing great defense and I don’t think either side disappointed,” said Butler, whose team will move to the 6A ranks next fall. “It was tough sledding for both offenses all night. They played a tough ball game and we didn’t expect anything different.”

Drones admitted the return trip to AT&T  was much different than the Sharks’ inaugural encounter in 2018 with Highland Park, a 27-17 defeat.

“Nobody really thought we were going to be able to get here last year and we got kind of shook up in the moment,” the junior quarterback said. “We knew what it took to get here this year and we all bought in as a family. We had to get the win this time.”

Holding Ryan to three-and-out on the game’s first series, Shadow Creek immediately went to work with a 10-play, 56-yard opening drive. Drones completed first down passes to Jared Jackson (20 yards), C.J. Guidry (16 yards) and Greg Hancock (17 yards) to set up his one-yard keeper with 7:27 left in the first quarter.

Eric Landavede booted the extra point through the uprights for a 7-0 Sharks’ lead.

The Raiders quickly responded, though, as Tra Smith took a handoff from a teammate on the ensuing kickoff and dashed 91 yards to pay dirt. Sanders then powered his way over the goal line for a two-point conversion run from the wildcat formation to give Ryan the upper hand at 8-7.

Shadow Creek’s initial attempt to reclaim the lead was turned back on a Billy Bowman interception in the red zone. However, a miscue by the Ryan special teams then offset Bowman’s pick.

A punt snap sailed over the Raiders’ Riley Nozzo  into his own end zone. Nozzo illegally kicked the ball off the ground before attempting to pick it up, but Randy Masters alertly scooped up the loose ball and motored 37 yards for a 14-8 SC advantage with 5:43 left in the second quarter.

The Sharks declined the illegal kicking  penalty, so the Masters’ TD return stood.

Despite having another Bowman interception derail a potential scoring drive a few minutes before intermission, Shadow Creek delivered an impressive nine play, 82-yard scoring march to start the second half.

Drones went in from yard out again and Landverde added the PAT to increase the margin to 21-8 with 7:58 remaining in the third.

Ryan countered with an 11-play series, capped by Sanders’ two-yard run to cut it to 21-15. The Raiders then had a chance to reclaim the lead after recovering a fumble at the SC 39-yard line midway in the fourth quarter.

The Sharks’ defense held on downs at the 23, though, and Drones ripped off a 55-yard gain deep into Ryan territory to set up Kelvon Brown’s eight-yard run with 3:08 left for a 28-15 Shadow Creek lead.

“I saw there was nobody in the hole and I just took it and ran,” Drones said about the 55-yarder.

Ryan refused to fold with Henigan hitting Ja`Tavion Sanders with a 26-yard TD strike with 1:14 left to bring the Raiders within six at 28-22.

The Raiders’ onsides kick attempt bounced out of bounds to give the Sharks the ball, but with Dave Henigan’s squad still having all three of its timeouts left, Ryan got the ball back with 49 seconds remaining following Shadow Creek’s punt.