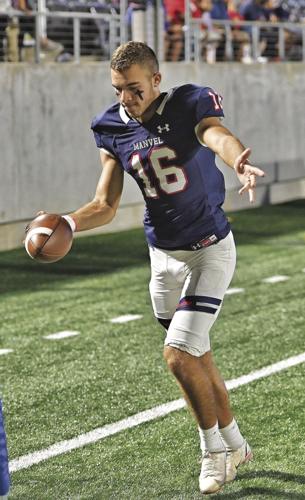 Numerous hours on the practice field along with extra work in the weightroom paved the way for Manvel Maverick football standout Brook Honore Jr. becoming one of the top punters in the country over the last two seasons. Honore will take his talents to the collegiate level at Texas Tech University next fall. 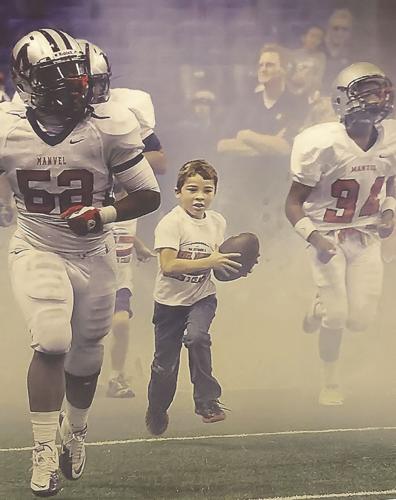 As a youngster (pictured at center), Brook Honore Jr. ran with team during their pregame entry on to the field and dreamed someday of donning the Manvel Maverick varsity football uniform.

Numerous hours on the practice field along with extra work in the weightroom paved the way for Manvel Maverick football standout Brook Honore Jr. becoming one of the top punters in the country over the last two seasons. Honore will take his talents to the collegiate level at Texas Tech University next fall.

As a youngster (pictured at center), Brook Honore Jr. ran with team during their pregame entry on to the field and dreamed someday of donning the Manvel Maverick varsity football uniform.

Dating back to his younger days of running with the team during their entry on to the playing field, Brook Honore Jr. always dreamed of being a Manvel Maverick someday.

He just didn’t image it would be taking deep snaps under center as the team’s punter. Not even encouragement from his dad over the years was enough to budge Honore from his  stance. He was planning on being another wide receiver on the squad, plain and simple.

However, all that changed a couple of years ago during Honore’s sophomore year, when the Mavs’ special teams’ coordinator paid a visit to his dad’s restaurant in Manvel and posed a certain question to Brook Honore Sr.

“He asked my dad if I could do it, because they were looking for a punter,” Honore said. “My dad told him he  didn’t think I was ready right now, but that I would be by the playoffs.”

That clinched it for Honore Jr., who wanted to do anything he could to contribute to the Mavs’ success.

“I thought it was lame at first and that it was just a specialist thing,” he admitted. “But once the special teams coach came to my dad and I watched Braden Mann do it, that really motivated me and we hit the ground running.

“The biggest adjustment was training over and over, but I accepted that it was my position, once I got the sudden job.”

“I known Brook since I got here when he was in junior high and we have never had a kid work any harder than him,” Hall said. “He wasn’t given the God given talent that some of our players have, but his work ethic exceeded any other player I’ve ever coached.

“There’s no telling how many balls went off his foot. He was constantly training, studying and getting people that really understood (the position). The best thing he did was stay away from me, because I’m not a punting person. He made himself into a phenomenal punter.”

Honore received what  he called his “wake up to varsity moment” when he debuted at the punter position in the 2019 area round of the 5A playoffs against Lamar Consolidated in Rosenberg. Despite facing 30 degree temperatures and a stiff 25 mile per hour wind, Honore compiled a solid 34-yard average on five punts in the Mavs. 62-34 victory with a long boot of 51 yards and two kicks landing inside the 20-yard line.

Taking over the position full time in 2020, Honore cranked out a 33.5 average on 31 kicks with a long of 55 yards and five boots landing inside the 20. While his junior year performance helped him gain both a ranking among the county’s top high school punters and the eye of coaches at the next level, 2021 ultimately elevated Honore to an even higher plateau.

Once the postseason hit, accolades started pouring in for Honore, much like the effect his punts had on the opposition. An All-Greater Houston Area Football First team nod was followed by All-East Texas First team and All-State First Team honors by SBLive.com and Class 5A All-State Second team recognition from the Texas Sportswriters’ Association. Getting several collegiate offers as well from the likes of Texas Tech, Kansas State, Alcorn State, University of Houston, Lamar University and Stephen F. Austin, Honore ultimately decided the don the red and black Red Raider colors in Lubbock next fall.

“You never underestimate the value of a  punter who can flip the field for you and Brook did that,” Hall said. “He was an extra weapon out there for us. Some can kick it long and some can kick it high. Very few like Brook can do both.

“He’s like Tiger Woods with a pitching wedge. He can put the ball wherever he wants. He will be missed not only as a player, but even more for his character and what he stands for as a human being."