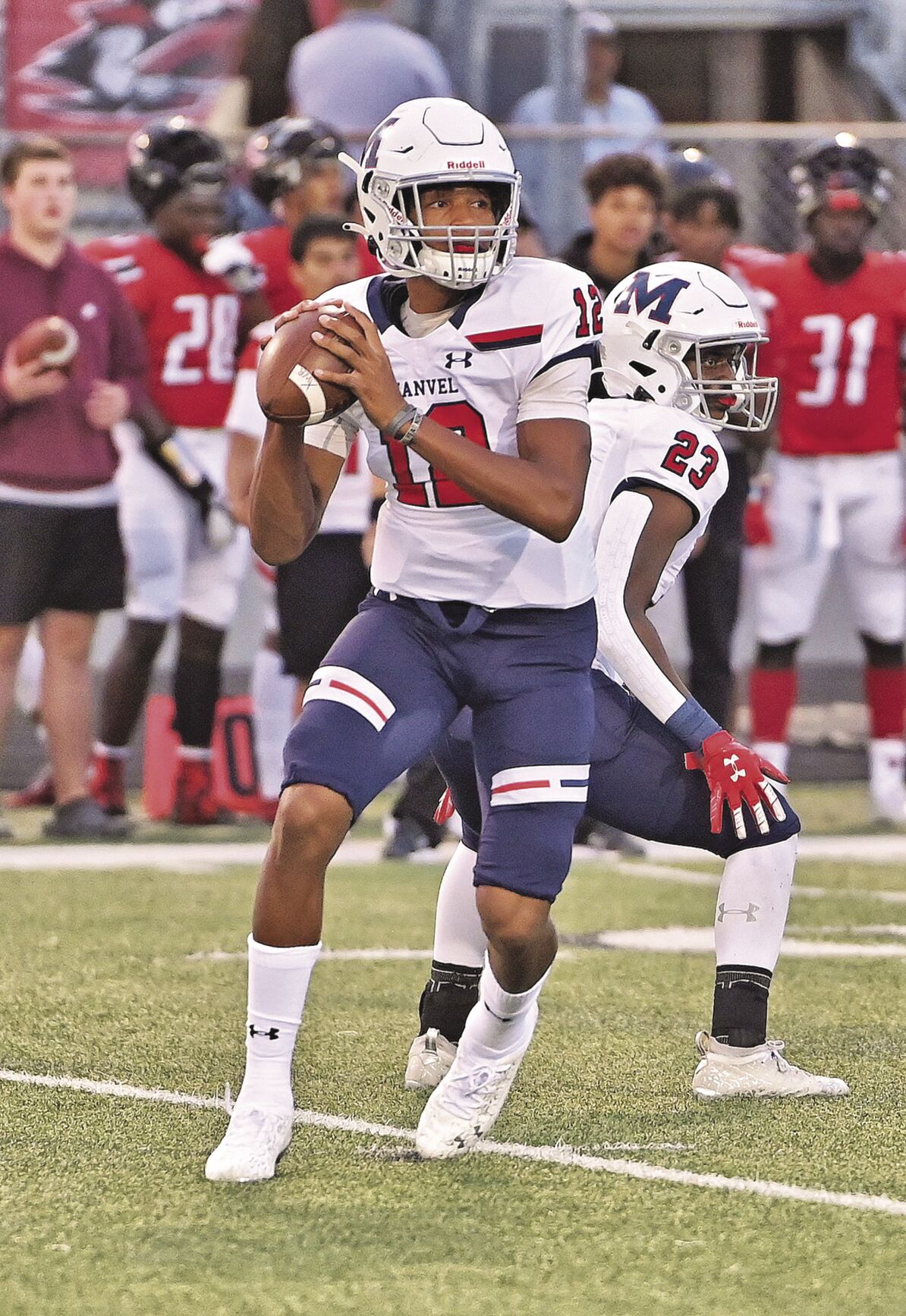 Mavericks' junior quarterback Kaeden Smith (12) looks for an open receiver downfield during Thursday's 10-5A Division I Football contest in Rosenberg. Smith passed for 184 yards and two touchdowns in Manvel's 41-6 triumph at Traylor Stadium. 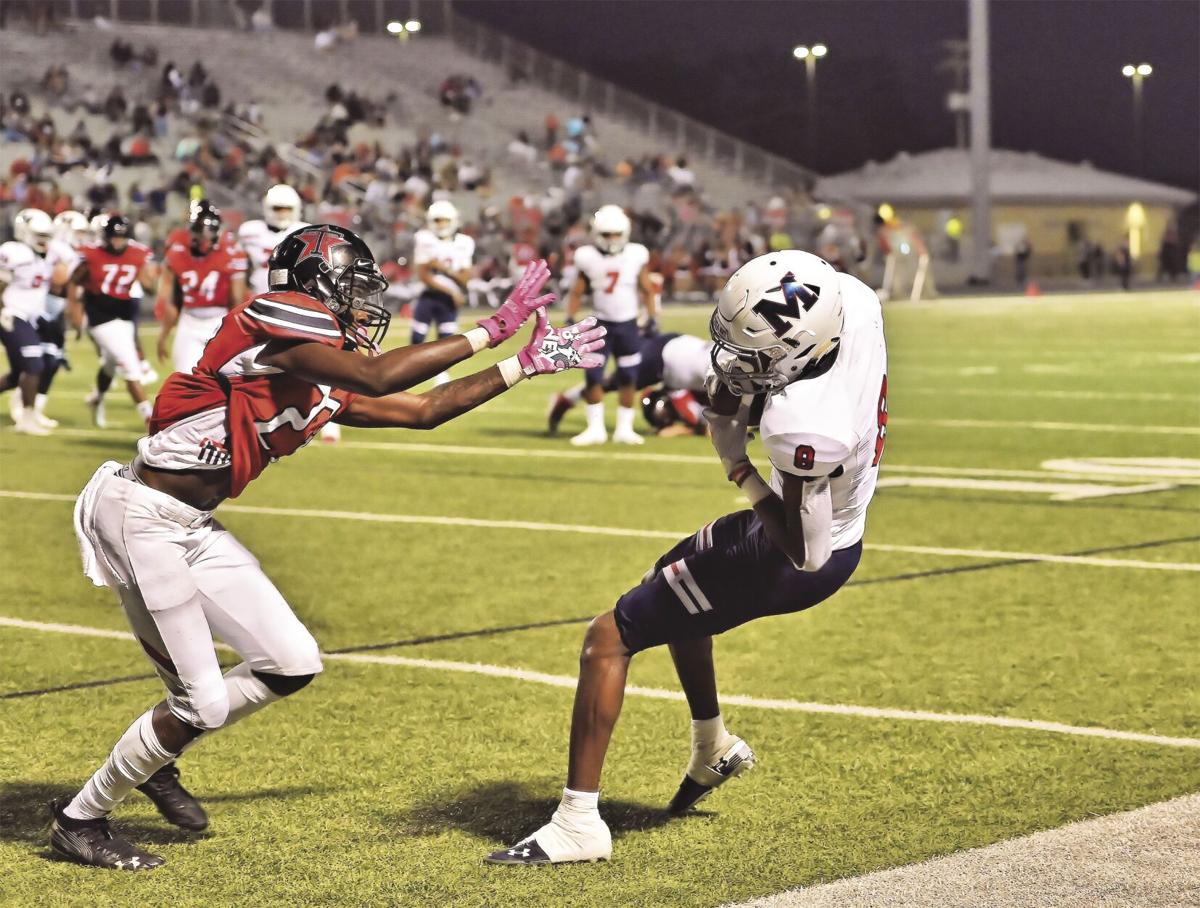 Manvel Mavericks' receiver Kelby Williams (8) manages to keep bloth feet inbounds in the end zone, after gathering in a 7-yard touchdown reception during the second quarter of Thursday's contest in Rosenberg. The Mavs moved to their record to 2-0 in district with a 41-6 victory over Terry.

Mavericks' junior quarterback Kaeden Smith (12) looks for an open receiver downfield during Thursday's 10-5A Division I Football contest in Rosenberg. Smith passed for 184 yards and two touchdowns in Manvel's 41-6 triumph at Traylor Stadium.

Manvel Mavericks' receiver Kelby Williams (8) manages to keep bloth feet inbounds in the end zone, after gathering in a 7-yard touchdown reception during the second quarter of Thursday's contest in Rosenberg. The Mavs moved to their record to 2-0 in district with a 41-6 victory over Terry.

ROSENBERG - Playing for the first tine in two weeks, the Manvel Mavericks rolled to a 41-6 triumph over Terry in 10-5A Division I Football action Thursday night at Traylor Stadium.

Moving their record to 3-1 overall and 2-0 in district, the Mavs dominated throughout, outgaining the Rangers by a staggering 466-75 margin in total yardage and by 24-4 bulge in first downs.

“It was tough (not playing), but the good thing about last week was spending more days going against ourselves,” Manvel head coach Kevin Hall said following the game and banging the heck out of us. “That did a lot for us. We didn’t make as many mistakes tonight.

“That’s a very well coached football team. We didn’t make the mistakes we did in the previous two weeks.”

Manvel took the opening kickoff and drove 57 yards in eight plays for the game’s initial tallies.

Quarterback Kaeden Smith found Walter Smith and Kelby Williams for key first down completions in the series, while De`Monte Seymour dashed the final 5 yards with 9:23 left in the opening period.

Antonio Rodriguez booted the extra point through the uprights for a 7-0 Manvel lead.

Seymour went over the triple digit rushing barrier for the third straight game with the senior going for 107 yards on 11 carries and two touchdowns.

The Rangers wasted little time responding to Seymour’s TD. Michael Odom hauled in the ensuing kickoff and exploded for a 79-yard return down the left sidelines to give Terry its lone points for the evening, as Albert Campos misfired on the extra points to leave Manvel in the lead at 7-6.

“We have to cover kicks better, because when you get in a big game, that can turn it for good.”

While being backed up at their own 13-yard line following a holding call on the next kickoff, the penalty failed to stop the Mavs from adding to their lead. Andre Thompson scooted for 17 yards to immediately get Manvel out of trouble, while Smith hooked up with Isaiah King on a 51-yard bomb completion three plays later to the Rangers’ 12-yard line.

Ty Harris capped the seven-play series with a 3-yard run and Rodriguez added the PAT with 6:45 remaining in the first to make it 14-6.

Smith completed 17 of 28 passes in the contest for 184 yards and two TD’s. Hall had Smith air the ball out 21 times in the first half in an attempt to get his junior signal caller more time throwing in the pocket  this week.

“We wanted to throw the ball a little more this week, cause we haven’t been able to the last couple of weeks,” Hall said. “We were trying to work on some of that. I thought he (Smith) did a good job. Like everybody else on the team, he make a few mistakes. But he’s learning. He will learn from those and will be fine.”

Manvel also padded its cushions by two more TD’s going into the dressing room, as Harris’ 1-yard run and Smith’s 7-yard toss to Williams increased the margin to 28-6 at intermission.

“We did play better this week (on defense), Hall said. “Hopefully we will get our linebacker back soon, who was injured in the week one game (at Dickinson). “We played more fundamentally sound. I was really proud that we were able to play more kids tonight and I was really proud of the way those younger kids played.

“We started a kid that never played linebacker in his life, senior Victor Williams and he played like a warrior tonight. He’s been a back-up and he had to step in and I couldn’t be more happier about the way he played.”

Seymour grabbed an 11-yard scoring strike from Smith and capped the Mavs’ outburst from 6 yards out on the ground.

The Mavs next host Hightower, Sept. 23 at AISD Freedom Field in Iowa Colony with a 6 p.m. kickoff. Manvel and Hightower met both in the regular season and playoffs last season with the Mavs winning both contests by 49-38 in Missouri City and 31-7 in Iowa Colony.

The latter game was the regional quarterfinal round.

“Hightower is a phenomenal football team,” Hall said. “Cornelius Anthony is just a first class coach. They got great talent. It will take a monumental effort for us, but we’re going to go back to work and see what we can do.”