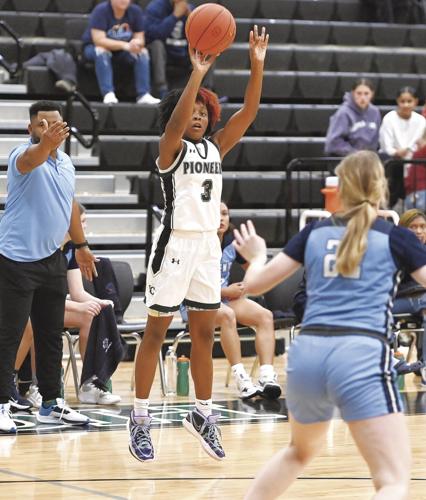 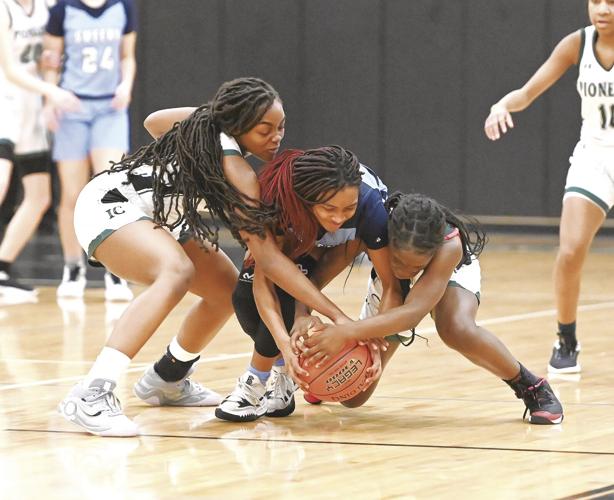 The Iowa Colony duo of Aaliyah Rogers (12) and Janyha Johnson (4) attempt to wrestle the ball away from Sweeny's Shaylee Robinson during Friday's game in Iowa Colony.

The Iowa Colony duo of Aaliyah Rogers (12) and Janyha Johnson (4) attempt to wrestle the ball away from Sweeny's Shaylee Robinson during Friday's game in Iowa Colony.

IOWA COLONY - While the Iowa Colony Boys’ Basketball first-year underclassman program has caught the attention of many around the state with their surprising rise in the state rankings, the Lady Pioneers are starting to make their own mark in the 26-4A race as well.

Iowa Colony fended off a late rally by Sweeny with six consecutive points down the stretch and came away with a hard earned 54-46 triumph to remain in second place in the district standings.

The Lady Pioneers entered the contest in a four-way tie for second, but as a result of the win over Sweeny, Stafford falling at Bay City and Columbia being idle, Brandi Justice’s crew took over sole possession of the runner-up spot last weekend.

“This was a big program win for us,” Lady Pioneers’ head coach Brandi Justice said following the game. “They beat us by six at Sweeny the last time.

“These girls are so fearless. They don’t care who we’re going up against. They just want to play and win. That’s all I can ask from them.”

Despite IC freshman Payton Watson being held to only five points on Friday after coming off a pair of 20-point performances, the 5-6 guard sank a clutch late bucket to put the Lady Pioneers up 50-46 with a little more than a minute to play.  Willett followed with a two free throws and Johnson hit a layup in the closing moments to give Justice and company the final eight-point cushion.

“She (Watson) always gives us the buckets we need  in transition,” Justice said. “We call her easy money or P-money. She’s just been phenomenal. She had a real slow, sluggish start today. But we always tell our girls to step up and help each other out. I think we really stepped it up on defense.

“We struggled in the second half. Aaliyah went out with a hand injury and we tried to rally around her and get our offense going. We did a tremendous job with her on the bench and once she got back out there, we got our wheels turning.”

The Lady Bulldogs jumped to a 7-2 lead in the opening period, only to have Iowa Colony explode for an 18-6 run capped by Willett connecting on a three-point bomb just past the half court mark for a 20-13 advantage following the initial eight minutes.

Iowa Colony maintained that seven points edge at intermission at 33-26, but saw Sweeny cut the margin to 42-38 after three periods and then close within two during the final period at 48-46 on Alecia King’s field goal with 1:46 remaining.

The Lady Pioneers next play at Bay City, Tuesday at 6:30 p.m.

In other girls’ basketball action, the Manvel Lady Mavericks rolled to a 60-27 victory, Friday at Santa Fe to remain atop the 18-5A standings at 8-0. The Lady Mavs (23-7 overall) next play at Texas City, Tuesday at 7 p.m.

The Manvel Boys also topped Santa Feat on Friday by capturing a 72-52 win at home behind amari McDowell’s 27 points and 20 points by R.J. Hurd. The Mavs (14-8 overall, 4-2 in 18-5A) next host Texas City, Tuesday at 7 p.m. Manvel trails the Stings by one game in the league standings.

Iowa Colony came away with a 63-47 at Sweeny in 26-4A boys’ action on Friday to improve to 22-3 overall. At 5-1 in district, the second-place Pioneers trail Stafford by one game. IC next hosts Bay City, Tuesday at 7 p.m.