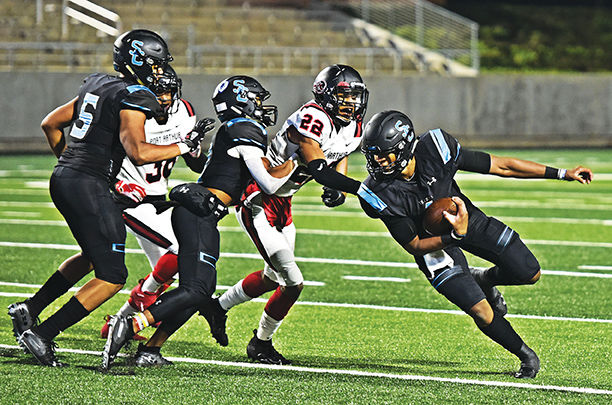 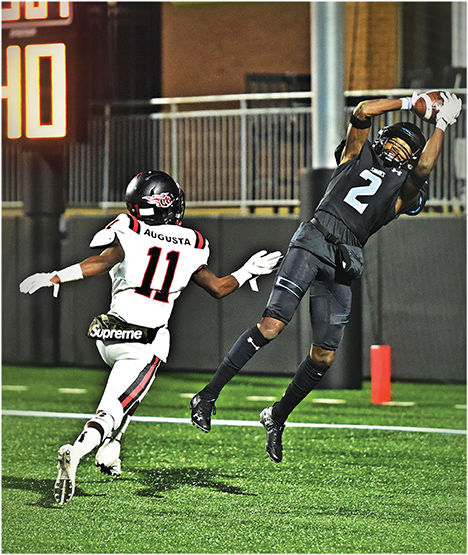 IOWA COLONY – While Shadow Creek was forced to grind out a long scoring drive to open Friday’s Class 5A Division I bi-district football affair, it was Port Arthur Memorial, who soon found themselves material for the Sharks’ grinder.

The Sharks totally dominated the Titans both during that initial possession and throughout the evening in a 49-7 romp at AISD’s Freedom Field.

The victory advances Shadow Creek (11-0) in the area round of the playoffs, where Brad Butler’s squad meets Hutto in a 7:30 p.m. kickoff at Waller ISD Stadium.

It also marked a stark contrast from SC’s first bi-district appearance a year ago when the Sharks had to pull off a second-half rally to edge Porter by a 37-30 count.

Shadow Creek gave Butler and company no such reasons to worry about a slow start the second time around on Friday, though.

“I’m proud about us coming out strong,” the SC coach said following the game. “Last year, we came out a little sluggish in the first round of the playoffs and had a tough ball game. But we started early this year.

“We were able to make a few plays offensively when things broke down. There were a few times on defense that we weren’t as sharp as we usually are. But we advance to week two and got another week to clean things up. I wasn’t pleased with our ball security. We put the ball on the ground three times during our opening drive.”

The Sharks were also forced to convert a pair of fourth down and one situations during their 13-play, 76-yard march, which ate up more than half of the first-quarter clock.

Jay`Veon Bell powered his way for two yards on fourth and short from the PAM 36-yard line and four plays after Greg Hancock rescued the Sharks from coughing it up following teammate C.J. Guidry’s 35-yard reception inside the Titans’ five-yard yard line, quarterback Kyron Drones managed to make it across the goal line on a fourth-and-one sneak attempt with 5:20 left in the first period.

Eric Landaverde booted the extra point through the uprights for a 7-0 Shadow Creek lead.

A pair of holding penalties thwarted another golden scoring chance for the Sharks on their next possession. However, Drones (14 for 25 for 228 yards, four touchdowns) ultimately found holes in the Titans’ secondary for three TD flings in the first half.

Kelvon Brown dashed 24 yards with a catch-and-run reception with 6:10 remaining in the second quarter while Randy Masters hauled in a 31-yard strike from Drones a few minutes later and Jared Jackson grabbed a 24-yard reception to increase the margin to 28-0 at the break.

Memorial averted the shutout on Adrian Hayward’s eight-yard run early in the fourth, but SC’s Jorge Jones recovered his own blocked punt in the end zone for a Sharks’ special team TD a little later and Drones capped things off with a 12-yard scamper in the closing seconds. Kullen Murrell and Dejuan Lewis both intercepted Memorial passes in the contest for the Sharks’ defense, while T.J. Marshall and Ronald Triplett each claimed a fumble recovery.