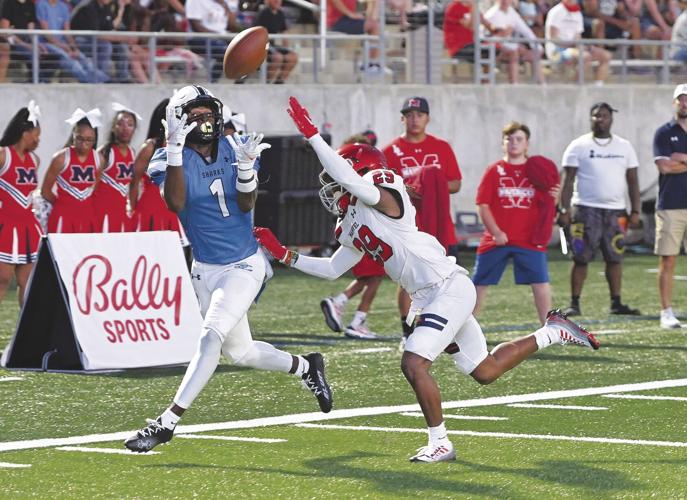 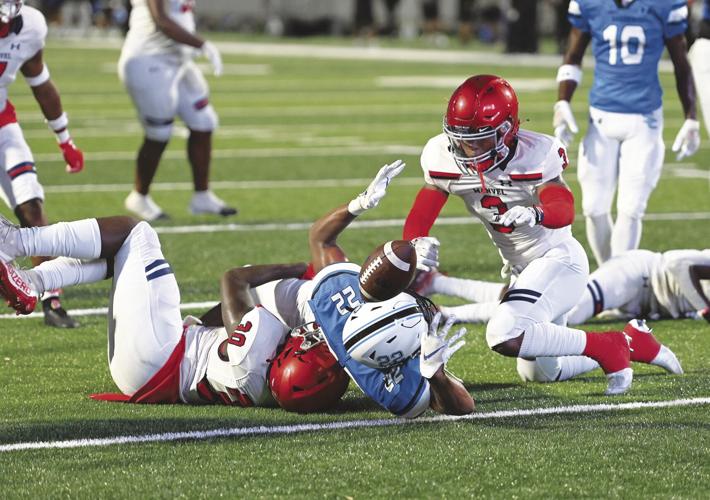 Maverick defenders Byron Carter (30) and Ja`mori Williams (3) force a fumble by Shark running back Jacob Washington near the goaline, which resulted in a touchback. 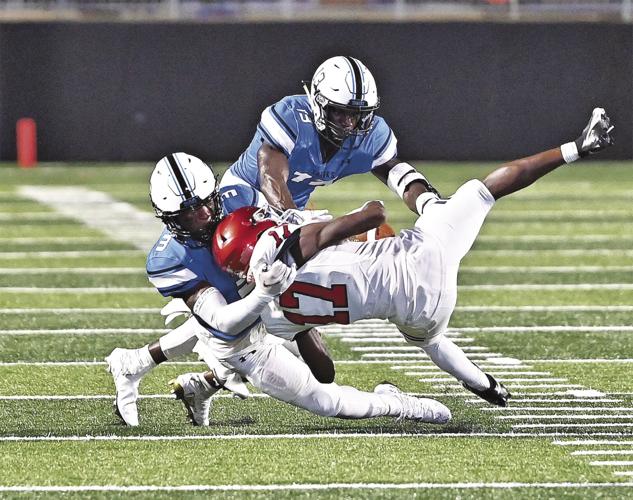 The Shadow Creek duo of Maurice Williams (3) and Scott Koumado (13) combine to bring down Manvel's Derius Clerkley (17) during Friday's contest in Iowa Colony.

Maverick defenders Byron Carter (30) and Ja`mori Williams (3) force a fumble by Shark running back Jacob Washington near the goaline, which resulted in a touchback.

The Shadow Creek duo of Maurice Williams (3) and Scott Koumado (13) combine to bring down Manvel's Derius Clerkley (17) during Friday's contest in Iowa Colony.

IOWA COLONY - Manvel and Shadow Creek’s first ever meeting on the gridiron got off to a little slow start with both defenses dominating the affair for most of the opening period, Friday night before a packed capacity crowd of 10,280 at AISD Freedom Field.

However, once things settled, the Sharks rolled to a season-opening 32-13 triumph in the Inaugural Bill Lewis HWY 288 Gridiron Classic, featuring the two Alvin ISD football powerhouses. The game was also televised statewide by Bally Sports Southwest.

Quarterback Duke Butler (13 completions in 23 attempts) passed for 239 yards and three touchdowns for Shadow Creek (1-0), while Tylik Burton rambled for 144 yards and one score. The Sharks’ defense also held the Mavericks off the board until late in the third quarter.

“We attacked real good on defense tonight and our tackling was also real good,” said Shadow Creek head coach Brad Butler, whose team was presented with the Bally Sports SW Texas Football Days' trophy following the contest. “At times, we sputtered a little on offense, but we also made some great plays. This was a building block for us

“The Mavericks (0-1), who entered the contest with just three returning starters, avoided their first shutout since 2008. Signal caller Kaeden Smith passed for 115 yards and the Manvel defense forced three turnovers.

“We knew going into the season we’re going to have to replace so many kids,” Manvel head coach Kevin Hall said. “In order to help them grow up, you have to play great people. That was a great Shadow Creek football team.

“All I told them at halftime is whatever you do, don’t quit. Our kids didn’t quit. We made mistakes all over the field, but we never quit. We never lost our composure. We were mature tonight more than our experience. I was so proud of the way they handled things. We’re going to get better each week.

“A loss is a loss and there’s no way to spin a loss. But when it comes to our team, I asked them to fight and they fought. We’re going to fight until we can’t fight no more. We’re going to get ready for a good Beaumont Westbrook team.”

The teams combined for six punts in the opening period, but a roughing-the-passer penalty gave Shadow Creek a first down on their fourth series and two plays later, Burton busted loose for a 64-yard scoring run with 1:34 left in the first. Aiden Bui booted the extra point through the uprights for a 7-0 Sharks’ lead.

After the Sharks held the Mavs to a quick three-and-out, Burton escaped again for a 42-yard gain to the Manvel 31-yard line and five plays later, Duke Butler hooked up with Dane Jones from 22 yards out with 10:59 remaining in the second quarter.

Manvel’s early frustrations continued with Smith being flagged for grounding in his own end zone to give the Sharks a safety and Jacorey Watson hauled in a 41-yard TD pass from Butler to make it 23-0 with 5:31 left before intermission.

The Mavs managed to keep things from initially getting out of hand, though, with a pair of fumble recoveries and Jalen O’Neal’s third-quarter interception. O’Neal’s pick helped set up Smith dashing 36 yards on a keeper  to cap an eight-play, 65-yard march for Manvel’s first tallies.

However, Zyran King-Brooks picked up a loose snap on Manvel’s extra point attempt and went untouched the other way, increasing Shadow Creek’s lead to 25-6.

Manvel pulled within 25-13 midway in the fourth on Steve Polk’s 1-yard run, but the Sharks put the game out of reach on the ensuing series. Butler and Caleb Washington combined on an electrifying 74-yard scoring strike.

The Mavs next play Westbrook, Sept. 1 at Beaumont Memorial at 7 p.m., while Shadow Creek hosts Clear Springs, Sept. 2 at Freedom Field with a 7 p.m. kickoff, as well.