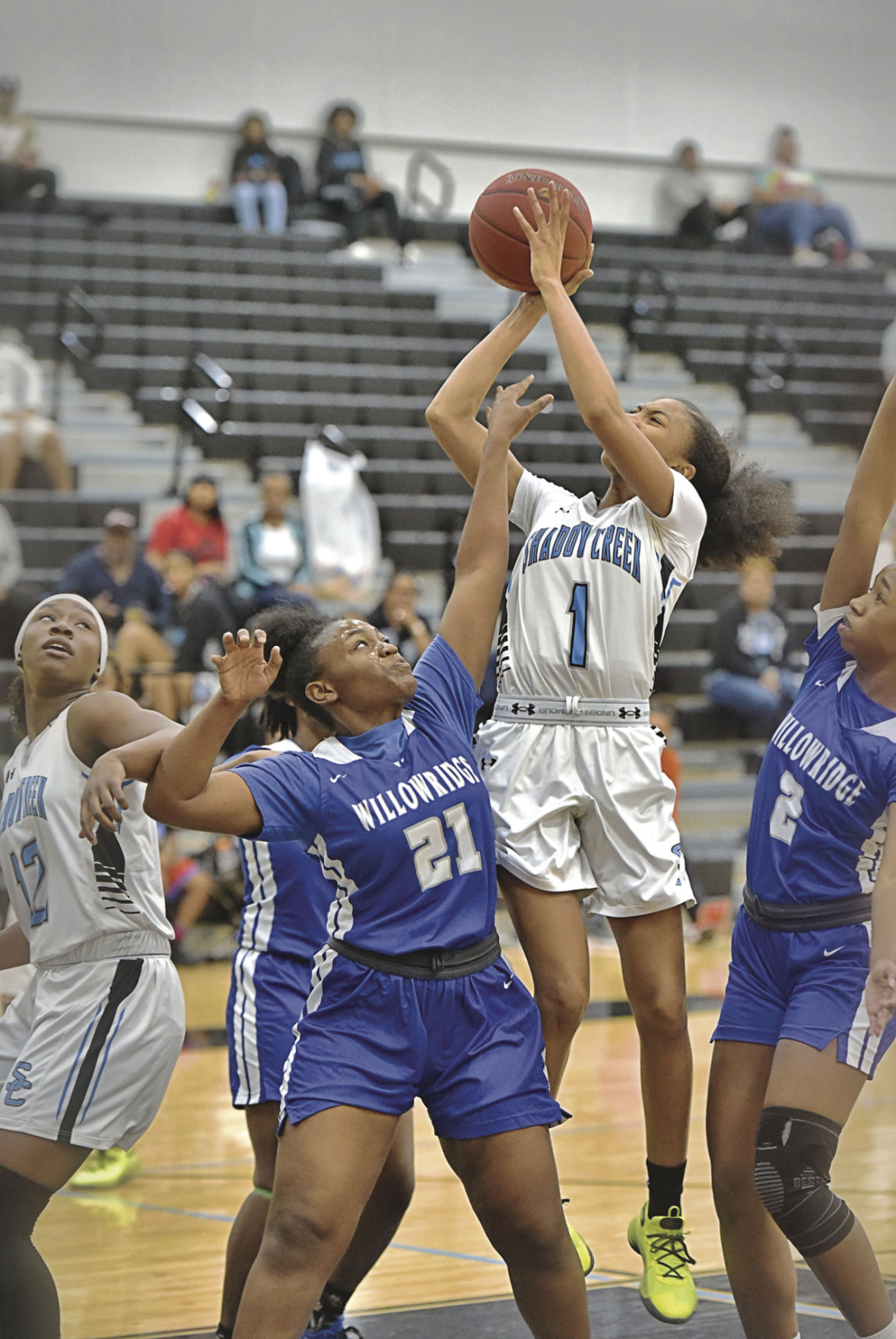 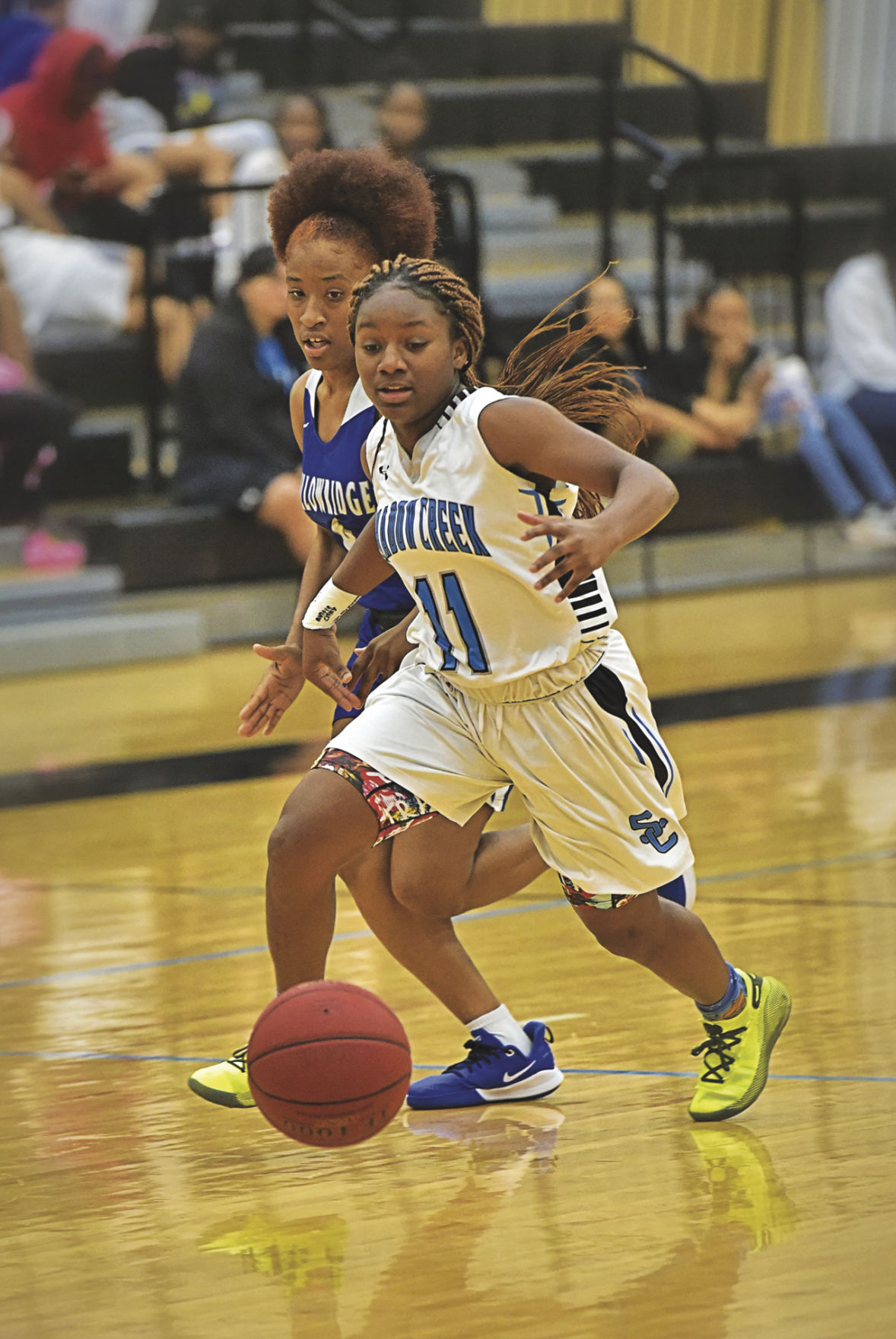 Lady Sharks' guard Da`Nae Williams (11) races for a loose ball after causing a turnover on the other end.  The Lady Sharks rallied from a nine-point second half deficit to rout Willowridge, 56-40.  (Photos by Michael Edmonds)

Lady Sharks' guard Da`Nae Williams (11) races for a loose ball after causing a turnover on the other end.  The Lady Sharks rallied from a nine-point second half deficit to rout Willowridge, 56-40.  (Photos by Michael Edmonds)

The Lady Sharks, who are off to their best start in school history and also coming off a stunning upset of defending region champion Hightower three days earlier, improved to a league-leading 9-0 mark in district and 22-4 overall.

However, Willowridge gave Shadow Creek all it could handle early, jumping to a surprising 17-8 lead in the second quarter behind a pair of treys by Chloe Williams (15 points) and the inside play of 6-1 post Jada Kyles-Washington (nine points).

“I think that my girls weren’t mentally here today,” Lady Sharks’ head coach Latoya Micheaux said following the game. “We did take a few days of break, trying to recover (from the major win over Hightower). This was our first time in school history to go undefeated the first round.

“We worked hard, so I wanted to reward them with a few soft days. It bit me, but I will say that they turned it up.”

The Lady Sharks turned it up on the defensive end, leading to five straight points by Da`Nae Williams to cut it to 17-13, while fast break layups by Sydni John-Baptiste and Bre`yon White tied it at 17. After the teams traded scoring possessions, Shadow Creek then took the upper hand for good at 20-19 on Brooklyn Brown’s free throw with three minutes left.

Taylor ultimately helped the Lady Sharks pad their lead with a pair of three-pointers, paving the way for a 32-20 advantage at intermission.

“We scored 25 points in the second quarter and that’s a good quarter against any team,” Micheaux said. “You got to tip your hat to Willowridge. They came ready to play. Their post player (Kyles-Washingoton) went hard at us and she was physical. I think our girls weren’t scared. They were kind of shocked. Once we started pressing them, though, they started turning the ball over.”

Shadow Creek continued its momentum into the second half with back-to-back buckets by Williams capping a 12-2 third quarter run to make it 44-22 with 3:41 remaining.

In other area action, the Alvin Lady Yellowjackets rallied from a five-point fourth quarter deficit to edge Dickinson by a 31-31 count Friday night at the AHS Competition Gym.

Shadow Creek also topped Willowridge in 24-5A boys’ hoop action with a 75-48 victory on Friday in Houston. Ramon Walker and Zy Morite both scored 18 points for the league-leading Sharks (18-2 overall, 8-0 in district) and Shawn Jones added 15 points.

The Sharks next play at Manvel on Tuesday at 7 p.m.

The Mavericks pulled off a dramatic comeback to force overtime at home against Hightower on Friday, but ended up suffering a heartbreaking 87-83 defeat to the Eagles in overtime.

The Hurricanes led 14-12 after one period, while increasing the margin to 36-27 at intermission and maintaining their nine-point lead at 53-44 heading into the final eight minutes of regulation.

However, Manvel then outscored Hightower by a 26-17 count to force overtime and actually led 79-74 with 2:26 left in the extra period. The Hurricanes delivered the rally this time around, though, closing  the game with a 13--4 run