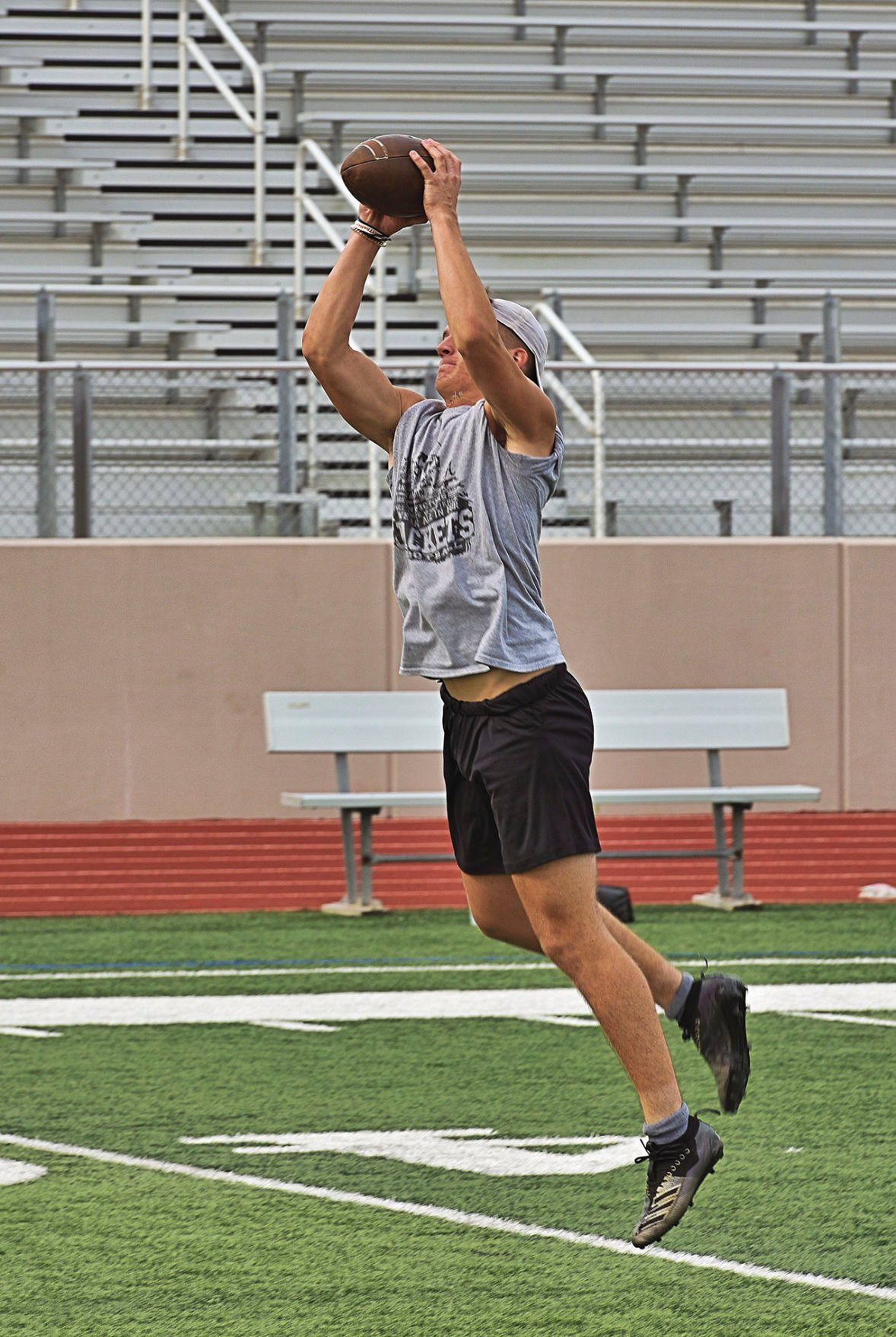 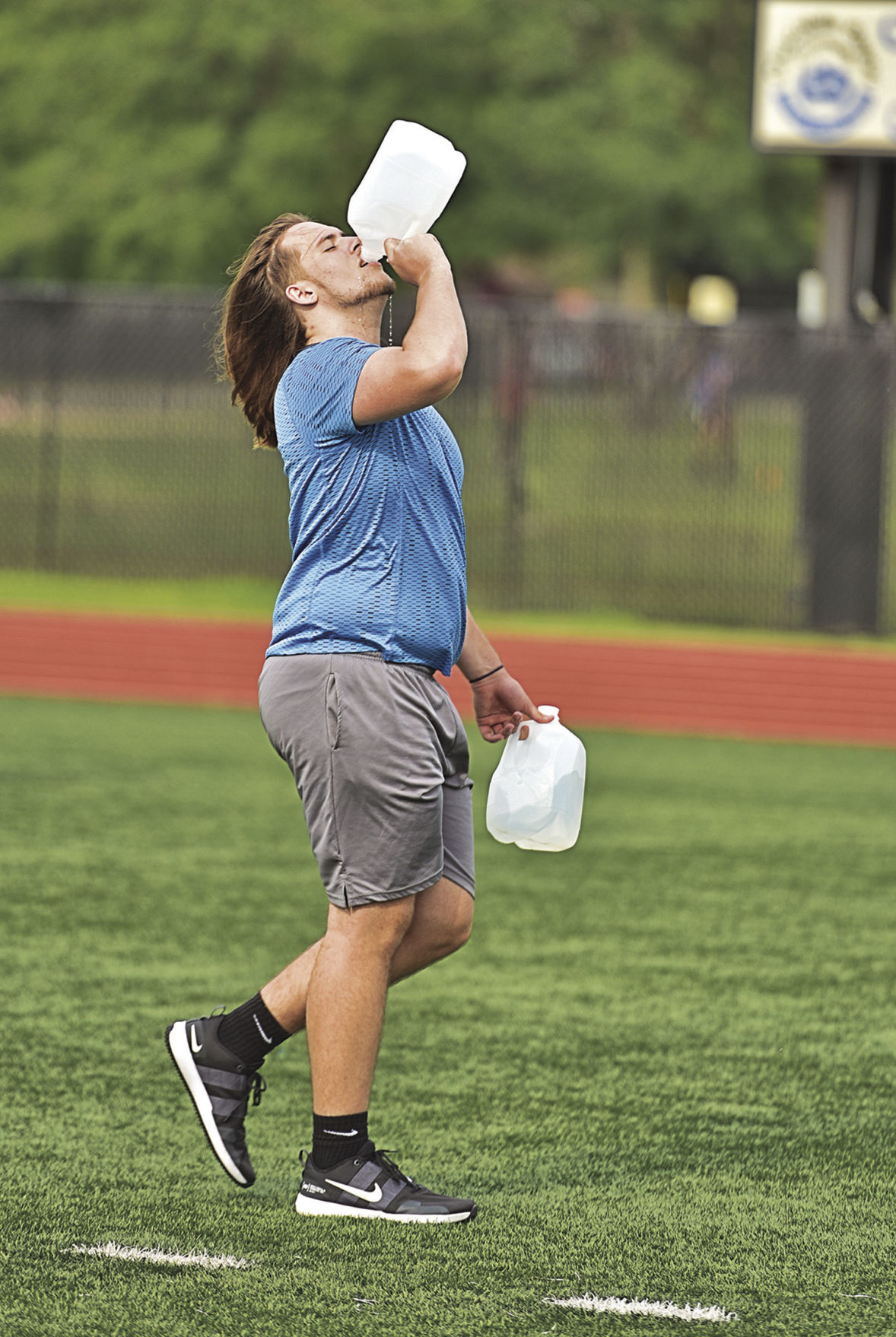 Alvin senior offensive lineman Connor Hughes beats the 90-degree plus heat by stayiug hydrated. While the program was run by mainly football in 2019, this year's participation featured participation by over 200 student athletes and coaches in all Alvin sports.

Alvin senior offensive lineman Connor Hughes beats the 90-degree plus heat by stayiug hydrated. While the program was run by mainly football in 2019, this year's participation featured participation by over 200 student athletes and coaches in all Alvin sports.

While temperatures soared in the mid 90’s for the initial week of Alvin High School’s limited strength and conditioning sessions, that didn’t stop Tim Teykl from getting a few chills along the way.

Getting the chance on June 8 to work with his athletes for the first time since early March due to the Covid-19 pandemic, the Yellowjackets’ assistant athletic director/head football coach was immediately overwhelmed by the numbers showing up at AISD Memorial Stadium for the first day of workouts.

“In comparison to last year, we had 32 kids show up,” Teykl said. “This year we had about 218 overall. That’s amazing for Alvin. It’s constantly gone up. We’re averaging about  120 football players and that’s not even touching the new puppy, which I call the freshmen.

“When I saw that many kids show up the first day, it was hot and I had goose bumps.  We had to some scrambling, because we didn’t know this many would be showing up. It was amazing.”

Teykl was also pleased by the way other coaches in Alvin sports came together to ensure the workouts were run in a smooth fashion.

“This is the thing I’m probably the most proud about,” he said. “For the first time in a long time, all the coaches (not just football) are aligned. Football basically ran it last year, but that’s not the case this year. That took some doing. They haven’t been asked, demanded or expected to do it in the past and everybody has their own ways. What I had to explain to them was that our superintendents, our AD’s and associations went to war to get this (the strength and conditioning programs) from the UIL. They went to battle.

“We got referendums and some changes and the emphasis was to get to our kids before outside sources did. We want to be around our kids”

Along with the enthusiasm from both the Yellowjacket coaches and student-athletes came plenty of caution, as well.

“There was anxiety that first week, because everybody had to come to the stadium for protocol,” Teykl said. “We had to take roll, take their temperatures and make sure we were doing a lot of hand washing and staying social distanced. That’s hard when you haven’t seen each other for 13 weeks.

“They (the kids) want to talk and when they’re in line, we had to make sure they were socially distanced from each other. From that standpoint I’m pleased. We tweaked it and tweaked, because we’re going inside for the first time with the weight room.

“Honestly the thing that slapped me in the face the most was how anybody could get their kids ready without using the weight room. I don’t know how colleges are doing it. You can go outside and get acclimated to the heat, but if you’re not in the weight room, you lose your mass and strength.”

Barring any setbacks from the pandemic, the Jackets and all Texas high school gridiron programs will start their two-a-day workouts on Aug. 3 due to Covid-19 wiping out all spring sessions. The Jackets will also have a pair of scrimmage opponents. The Northbrook Raiders come to AISD Memorial on Aug. 14, while Alvin plays at Oak Ridge on Aug. 21. Scrimmage time for both contests are 6:30 p.m.

Alvin then opens their 2020 regular season slate at home against the Stratford Spartans on Aug. 28.

“We need to hold true to what we’re doing and get the kids acclimated,” Teykl said. “Keep screening and doing our protocols. Does it replace spring ball? No and that hurt us, but you have got to take what you can get.

“It’s kind of like the realignment right now, where you don’t know what district you’re  going to. Numbers are going to drive this. They (the Covid-19 cases) are going back up nationwide, because we have opened up the door.

“I know athletics are the guinea pigs for schools. How we manage our groups and our kids. That will go a long way in how we start school. We’re staying the course in Alvin ISD.”

The Jackets travel to Sugar Land’s Mercer Stadium in week two on Sept. 4 to face the Kempner Cougars, while closing their non-district schedule with Pasadena Memorial on Sept. 11. The game will also be the Jackets’ homecoming.

Flipping districts with Brazoswood, the Jackets will be aligned with the Alief schools for the first time ever and also won’t be in a district that features either Clear Creek or Pasadena ISD for the first time since 1994. Alvin reunites with Pearland, as well, with the Brazoria County foes having last been together in 22-6A in 2016.

“I’m so excited. We’re going to have one of our own with Shadow Creek back in it,” Tekyl said. “I’m also melancholy, because we’ve leaving some good people (in 24-6A) with Clear Creek ISD. That’s some good folks.

“Those relationships were long lasting. I’m looking at it from a tax payer standpoint. The geography was close. Sometimes change is good. It gets you out of a rut. The Alief schools will be a big challenge, because the only way you can get there is down Highway 6.”

Teykl said he really wasn’t surprised about the first time set-up with Alief.

“With Pearland, I coached against Ricky (Tullos) when he was at George Ranch. We had some majestic battles. Dawson with Mike Allison is also going to be fun.

"We just got to tie up some loose ends to make sure everyone is on the same page. Right now, our schedule is going to parlay into nine Friday night games.”