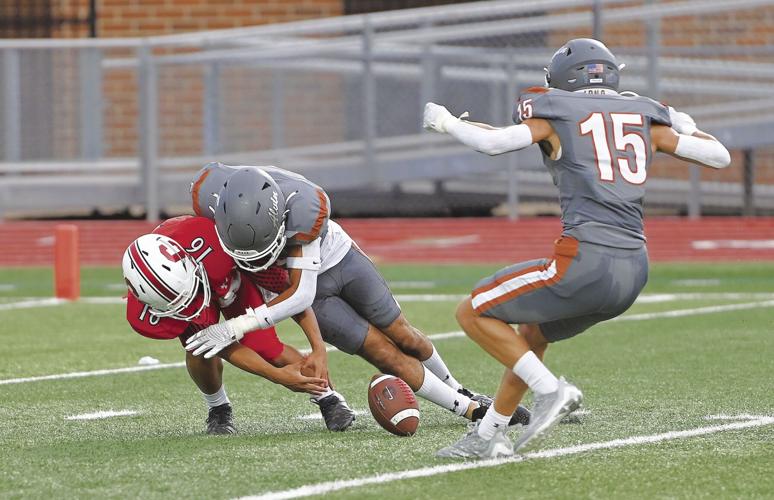 Alvin's Sesar Lorneli keeps Cleveland's Moises Sanchez from getting to the loose ball after the Indians' punter mishandled the center snap during the first quarter of Friday's 41-20 homecoming victory for the Yellowjackets. Riley Pavlas (15) is also closing in on the play for Alvin. (Photo by Michael Edmonds) 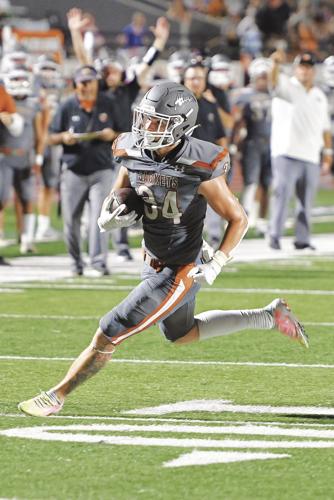 Yellowjackets' running back Cole Erndt (34) dashes 12 yards untouched to the end zone after taking the option pitch from QB Brayden Griffin during the second quarter of Friday's 41-20 homecoming triumph for Alvin. The Jackets are off their first 2-0 start since 2015. (Photo by Michael Edmonds) 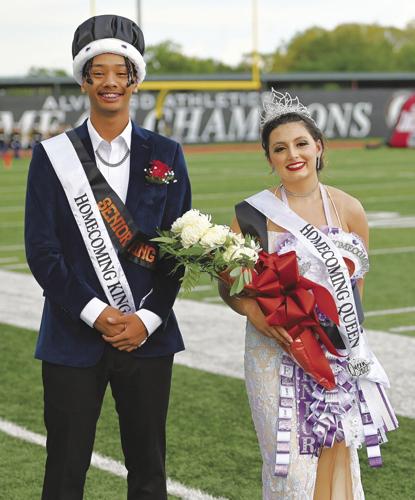 Alvin's Sesar Lorneli keeps Cleveland's Moises Sanchez from getting to the loose ball after the Indians' punter mishandled the center snap during the first quarter of Friday's 41-20 homecoming victory for the Yellowjackets. Riley Pavlas (15) is also closing in on the play for Alvin. (Photo by Michael Edmonds)

Yellowjackets' running back Cole Erndt (34) dashes 12 yards untouched to the end zone after taking the option pitch from QB Brayden Griffin during the second quarter of Friday's 41-20 homecoming triumph for Alvin. The Jackets are off their first 2-0 start since 2015. (Photo by Michael Edmonds)

Thanks to their second consecutive fast start in as many weeks, the Alvin Yellowjackets are also off to their first 2-0 start to a season since 2015.

Before a packed homecoming crowd, the Yellowjackets dispatched the Cleveland Indians 41-20, Friday at AISD Memorial Stadium.

Alvin rambled for 411 yards of total offense and forced five turnovers to offset a 365-yard effort on the other end by the Indians.

“We bent a little but didn’t break (on defense),” Alvin head coach James Gage said following the contest. “They (Cleveland) came out and forced a turnover on our second possession, but our defense got the ball right back and scored.”

After Cleveland went three-and-out on their first series, punter Moises Sanchez mishandled the center snap with Yellowjacket Eddie Parker falling on the loose ball at the Indians’ eight-yard line.

A pair of keepers by Alvin quarterback Brayden Griffin then led to the game’s first touchdown with the last coming from three yards out. Griffin also powered in his way in on the ensuing two-point conversion run to give the Jackets an 8-0 lead with 7:53 left in the first.

While the Alvin special teams stunned the Indians with an onside kick with Maison Garcia making the recovery at the Cleveland 39, a fumble three plays later kept the Jackets from taking advantage. However, Gio Gutierrez picked off a desperation Ruben Mendez fourth down fling a few minutes later at his own four-yard line to thwart a Cleveland scoring drive.

Fullback Dayshawn Peterson promptly broke loose up the middle and blazed 96 yards to the end zone to increase the Alvin lead to 14-0 with 2:40 still remaining in the opening period. Peterson rushed for 209 yards on 16 carries and two TD’s. The 96-yarder by the senior was also the second longest scoring run in school history.

Eric Olszewski delivered a 97-yard TD against Rayburn in 2012 for the school record.

“We were wanting them (the secondary) to knock it down and Gio comes up with the interception,” Gage said. “Everybody’s griping and I said guys, I like 96 yard play drives. I wasn’t expecting a 96-yard run when Dayshawn went 96 on the next play, though.

“He’s a special talent and we got so many special kids. Cole Erndt played a great tonight. Brayden Griffin played a great game tonight. Our whole offensive line played great. Our defensive made the plays when they needed to.”

The Alvin defense came up with a big play on the next series, as a second down sack on Mendez resulted in a fumble and Sesar Lorneli recovery at the Cleveland 35-yard line. Griffin (71 yards on 11 carries, 1 TD) scampered in from 28 yards out three plays later and Austin Hill’s PAT increased the margin to 21-0 with 11:50 left in the second.

The Indians managed to reach the end zone both on Tyler Spencer’s 10-yard run and Spencer’s 5-yard TD pass to Ivion Jordan later in the period, but the Jackets sandwiched Erndt dashing 12 yards between the two scores. Erndt scored after taking the option pitch from Griffin to maintain a double digit cushion for Alvin at 27-14 at intermission.

“I told the kids at halftime that this was a two score game and that the first two series of the second half were going to determine the outcome,” Gage said. “If we let them score, it’s now a one possession game, but if we stop them and go score, then it’s a three-possession game.

“We didn’t want to get into a shootout with them.”

Cleveland indeed threatened to make it a one score contest with the Indians moving from their own 39 to inside the Alvin 20 after taking the second half’s opening kickoff. The Jackets’ defense forced another Indians’ fumble following a short pass reception, though, and the offense marched 84 yards in a marathon 11-play drive, which ate up over six minutes on the Memorial Stadium scoreboard clock.

Peterson capped things with a 2-yard run to make it 34-14 with 1:18 remaining in the third and Cleveland never recovered.

Another Indians’ turnover on the ensuing series ultimately led to Erndt’s 13-yard run early in the fourth.

“It an was unbelievable crowd. I’m excited for the school and community,” Gage said. “My coaches also did a great job of preparing this week and so did the kids.”

The Jackets next play Beaumont United on the road, Sept. 9 at Beaumont ISD Stadium at 7 p.m.