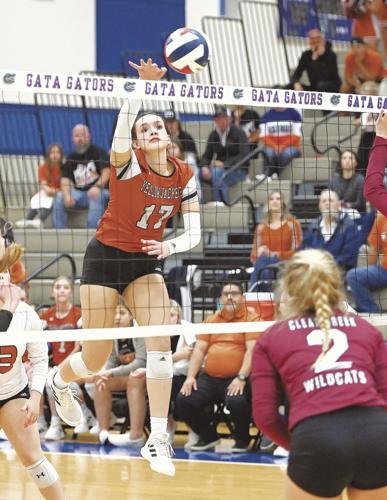 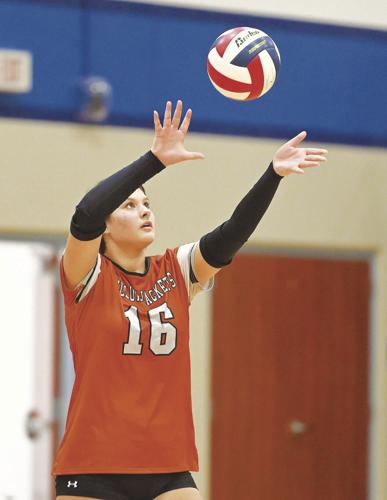 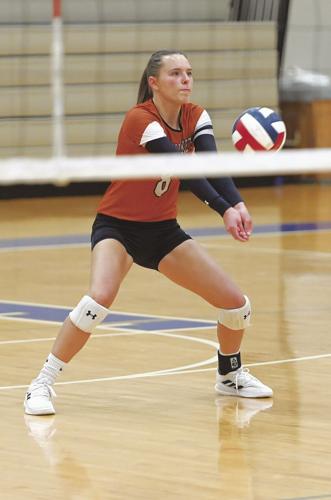 Alvin's Aubry Anderson (8) digs out a ball near the net during Tuesday's bi-district playoff match in Dickinson. (Photo by Michael Edmonds)

Alvin's Aubry Anderson (8) digs out a ball near the net during Tuesday's bi-district playoff match in Dickinson. (Photo by Michael Edmonds)

DICKINSON - Kylie Kunefke admitted to a “good feeling” about her team’s chances a few days prior to the Alvin Lady Yellowjackets’ bi-district volleyball showdown with Clear Creek.

The second-year head coach just didn’t know those positive vibes would be taken to epic proportions by the Lady Jackets, as Alvin stunned the Lady Wildcats by 25-23, 27-29, 28-26 and 25-23 scores, Tuesday night at Dickinson High School.

Alvin (27-14) captured its first playoff victory since 2015 along with also avenging a loss in the 2021 bi-district playoffs to Creek. Tuesday’s classic four-set battle featured 22 lead changes and down to the wire finishes in each game.

For Kunefke, it was also the first win over a Lady Wildcats’ program where she served as an assistant for five years on Scott Simonds’ staff.

“We’re very superstitious and when I told my husband (Creek head baseball coach Brett Kunefke) that I got a feeling, I got a feeling. He said stop talking about it and  keep those feelings inside,” said Kunefke, whose team played Summer Creek in the area round, Thursday night at Goose Creek Memorial HS in Baytown. “That’s exactly what we did, but I wanted to tell my kids because I was so confident. I was extremely confident in them and they played like it tonight.

“They never gave up and just kept it going. We’re going on to the second round. Going home early last year was heartbreaking, so it’s been a goal for us the whole year to get past the first round.”

“We all wanted to win so bad,” Garza said. “We haven’t done that since I’ve been in high school. It’s been a long time ago.”

Alvin captured the opening set behind nine Garza kills and a service error by Creek’s Olivia Jones at game point. The Lady Jackets then had a golden opportunity to take a 2-0 set advantage with three set points, but Stratton Sneed’s spike tied  things at 27-27 and Alvin followed with back-to-back reception miscues to even the issue at a game apiece.

The third set featured big runs by both squads. The Lady Jackets jumped to a 17-6 lead, only to watch Creek respond with a 14-3 run to tie the game at 20-20. Alvin then had to fend off a CC game point attempt at 24-23 and watched the Lady  Wildcats do likewise with deficits of 25-24 and 26-25, before a Creek error and Singleton’s set-point stuff put the Lady Jackets back in front.

“I think that really fired us up,” said Singleton about Alvin pulling out the third game. It got us excited for the next set. We’ve never done it before (get past the first round), so it really pumps us up.”

The hitting of Garza, Strban and Singleton paved the way for the Lady Jackets to race out to another big cushion in the fourth set at 10-2, while back-to-back aces by Wright helped them maintain that eight-point cushion a little bit later at 21-13.

After Strban’s kill put Alvin at match point, Ella Holder’s spike brought Creek within 24-23. However, the Lady Wildcats were then called for a net violation to send the Lady Jackets to the second round of the playoffs for the first time in seven years.

“Creek’s really deep and they were subbing in kids in both the front and back row,” Kunefke said. “We have such a jelled them. We’re small. We didn’t move anyone up for the playoffs except other than practice players. It’s a cohesive jelled unit and I think that was an advantage for us tonight.”

In other area volleyball playoff action, the Manvel Lady Mavericks rolled to a 25-6, 25-20 and 25-15 sweep of Crosby in the Class 5A Bi-District Playoffs, Tuesday night at Sam Rayburn High School in Pasadena.

The Lady Mavs (31-10) next advance to meet Lamar Consolidated in the area round, Friday night at Wheeler Field House n Sugar Land at 5 p.m.

Shadow Creek saw its season come to an end with an 8-25, 17-25 and 15-25 straight set defeat to Clear Springs, Tuesday in the Class 6A Bi-District Playoffs in Alvin.

The Lady Sharks close their season at 21-20.