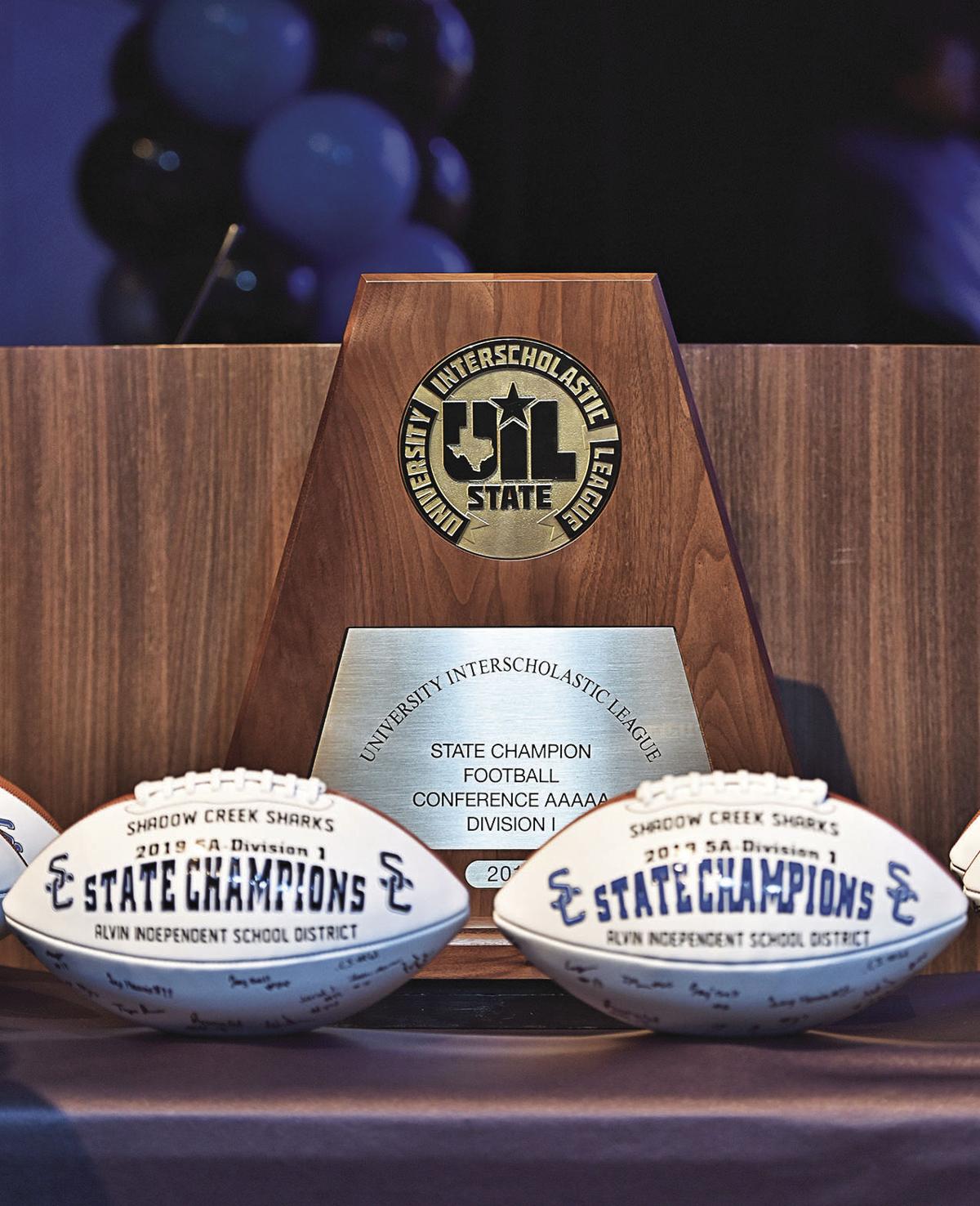 The Sharks' state championship trophy is shown on display with specially made footballs also recognizing the accomplishment during Wednesday's celebration at SCHS. 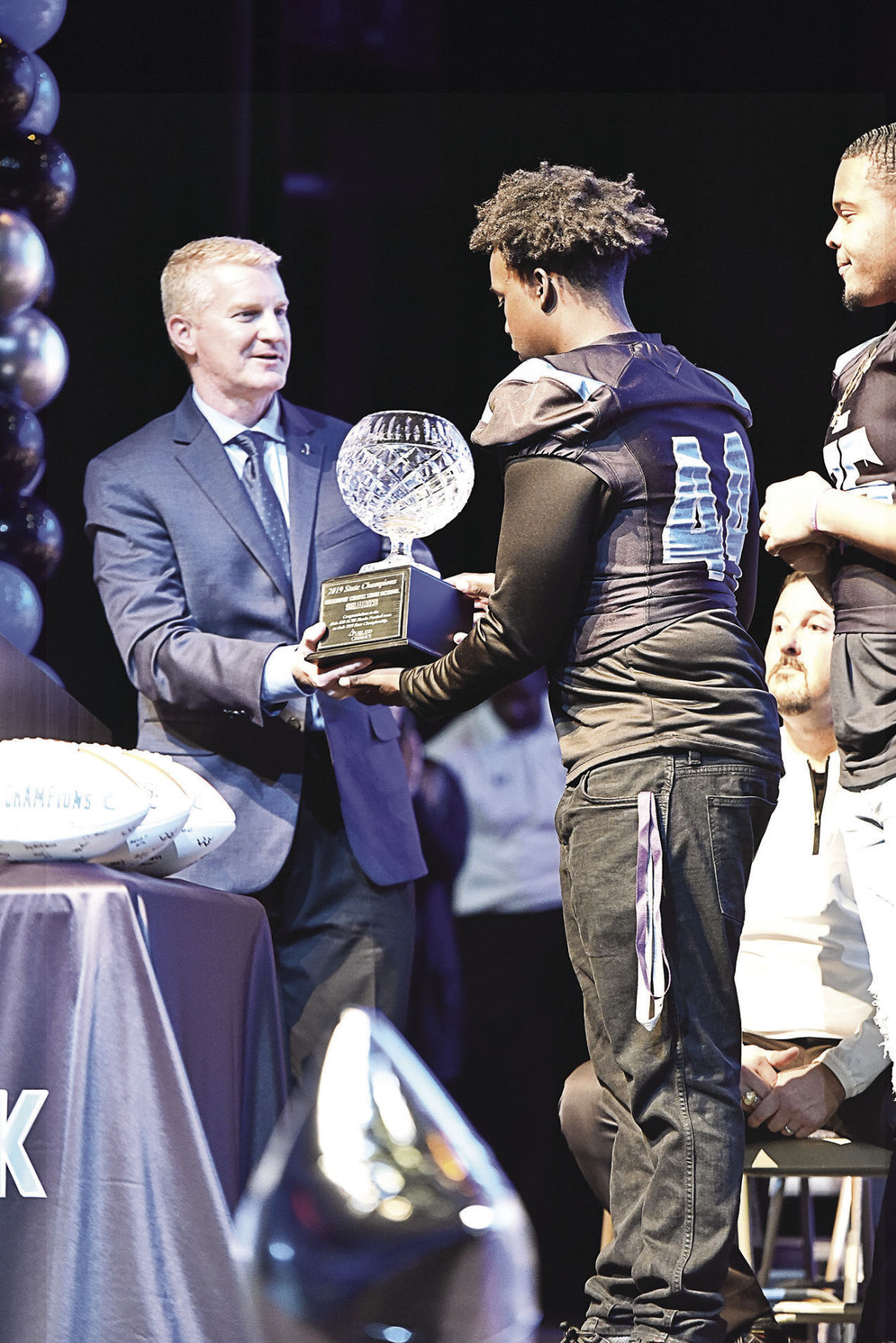 Shadow Creek linebacker Warren Shankle (44) proudly accepts a team presentation from a member of the Pearland Chamber of Commerce during the Sharks' state championship celebration on Wednesday at the SCHS Auditorium.

The Sharks' state championship trophy is shown on display with specially made footballs also recognizing the accomplishment during Wednesday's celebration at SCHS.

Shadow Creek linebacker Warren Shankle (44) proudly accepts a team presentation from a member of the Pearland Chamber of Commerce during the Sharks' state championship celebration on Wednesday at the SCHS Auditorium.

“We’re all so proud of you and we’re here to celebrate you tonight,” Nelson said. “I watched the game from up in the stands and on the sidelines and appreciate all the heart felt prayers and positive acclamations coming from the teammates, the coaching staff, trainers and everyone in between.

“I remember those last three minutes of the game as you all do. It felt like hours. The entire crowd was on pins and needles. Everyone was wanting to get down on the field and I know everyone watching the game at home was the same way.”

“It was just four years ago that we opened the doors of Shadow Creek High School and started making our mark on the state,” Hestand said. “I know we keep saying 31-1, but there’s really more than that. We’re weren’t UIL those first two years, but countless hours were spent traveling all over the state (to play games) and some of those kids are here tonight.

“Can you believe how far this program has come. It’s truly a Cinderella story.”

Thompson, who served previously as a Texas high school football official for over 40 years, said he’s never seen anything like the Sharks’ incredible first two seasons “in all his years of association with Texas

“I don’t think some people realize what a great accomplishment this is and what this team has done,” Thompson added. “I told Coach Butler tonight that this is beyond what anybody could ever imagine.”

The celebration also featured video highlights from the season with Butler joining SC players Jeremiah Harris, Jay`veon Bell and Courtney Brown in thanking the community for their support.

“We are extremely thankful for the support, especially during the playoff run,” Butler said. “This championship is really about all of us. We got so many groups and organizations that played a role in helping bring this championship back to Shadow Creek.

“I don’t think you will find a coaching staff that’s more invested in the players than our guys. I also can’t brag on these players enough. A two-year combined record of 31-1. They win the state championship in some else’s backyard. They have put together what a lot of people say is the greatest program start in the history of Texas high school football.

The thing that stands out the most about this group is they never backed out of a fight. It didn’t matter how bleak the circumstances were or how hopeless the situation may have looked. They never quit. If they can take that attitude into the rest of their lives, it will serve them well.”

“I would like to thank everyone for coming and supporting us right down to our lowest moments, when we were down 24-7 to Foster,” Brown said. “We will also never forget the support you gave us in winning the state championship.”

Shadow Creek then capped things off by defeating Denton Ryan 28-22 in the Class 5A Division I State Championship on Dec. 20 at Arlington's AT&T Stadium to bring home both the school’s first ever state title and the first football state crown for Alvin ISD.