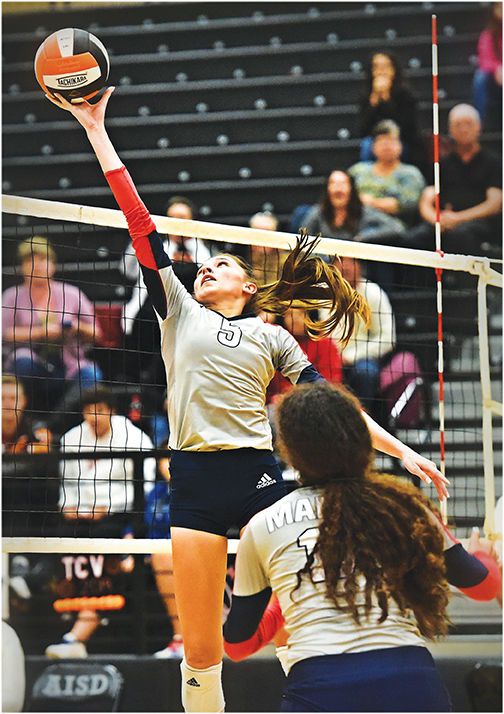 Lady Mavericks' setter Ceci Harness surprises the Texas City defense with a dump shot during Friday's area round volleyball playoff match at Alvin High School. Harness also dished out 31 assists for Manvel, who advances to meet Santa Fe in the regional quarterfinals on Tuesday in Pearland. 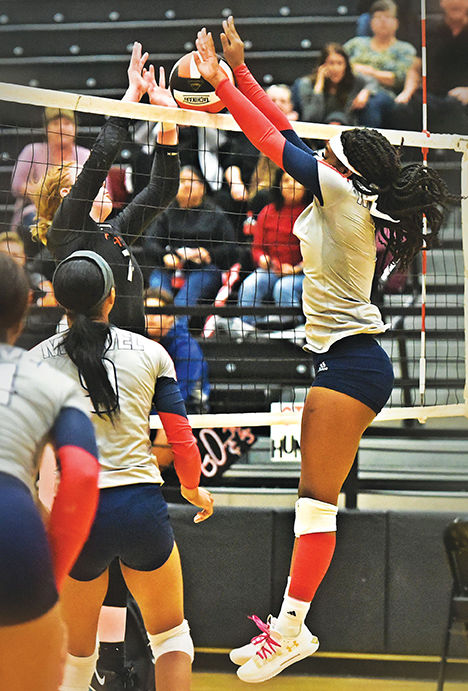 Lady Mavericks' setter Ceci Harness surprises the Texas City defense with a dump shot during Friday's area round volleyball playoff match at Alvin High School. Harness also dished out 31 assists for Manvel, who advances to meet Santa Fe in the regional quarterfinals on Tuesday in Pearland.

“It’s very exciting winning tonight and finally getting to the third round,” Lady Sharks’ head coach Whitney Daniels said following the match. “It’s been a long time coming. The girls have been working really hard. It was also great to beat Barbers Hill, because we lost to them in our first year in the second round.”

The Lady Mavs were busy making their own history in Friday’s opener, extending their school record victory total to 40 and also making their deepest playoff run since 2017.

“It was an exciting match. I just feel it was the intensity between the two teams,” Smith said. “We played with more intensity tonight. The last time we played them was the third game of the season and we had to work some kinks out. We’ve made a couple of (player) additions since then, but the difference was that we played with more aggression this time.”

Ashlynn Lewis attempted to get Texas City going in the second game with a pair of kills tying things early on at 2-2, but Johnson ultimately provided her own damage at the net with six kills. Junior outside hitter Mya Singleton rejected a TC spike and also hammered the set point kill to put the Lady Mavs in position for the sweep.

Smith then put both the third game and match out of reach for the Lady Stings with two kills and two blocks during Sellers’ service to make it 18-10 and Lewis dumped back-to-back spikes to cap the dominating broom outing.

Senior outside hitter Alexis Williams delivered a triple double performance with 18 kills, 19 assists and 21 digs, while senior Halle Sanders and junior Michelle Murphy also had big nights to spark the Lady Sharks in the second game of the double header. Sanders provided 14 kills and 14 digs for a double double and Murphy did likewise with 21 assists and 11 digs. Shadow Creek overcame a 20-16 first set deficit with a 7-0 run, which featured two Sanders blocks and a kill, a pair of Williams’ floor shots and Anaya Duncan’s spike.

While Faith Guidry stopped the run for Barbers Hill with a kill to cut the gap to 23-21, Williams answered on the other end for the Lady Sharks and the Lady Eagles were then called for a double contact hitting violation at game point.

The SC comeback proved huge with Barbers Hill then capturing the second set to only tie things at a game apiece.

“Everybody was getting down as a team (in the first set),” Williams said. “But we came together and executed our passes and came out with a win in the end.”

Sanders came up big again with a pair of third-game kills to increase Shadow Creek’s lead to 22-18 and following back-to-back hitting miscues by Hill to put the Lady Sharks at game point, the Lady Eagles pulled within 24-20 on Guidry’s kill and an unforced error by SC. However, Duncan then drilled a kill off a pair of Hill blockers to regain the set advantage in the Lady Sharks’ favor.

Despite Barbers Hill jumping to an early 5-1 lead in the fourth and still holding an 8-5 cushion a little later, the Lady Sharks erupted for six unanswered tallies behind kills by Arianne Renaud, Amber Johnson and Williams and never trailed again.

Sanders provided kills in the last three of five possessions with the senior’s cross court blast at match point sending the Lady Sharks to the regional quarterfinals for the first time in school history.

“The key for us was communication (in the fourth game),” Williams said. “We had to get the pass up to get the kill. We made it to round three and made history for Shadow Creek volleyball. Coach (Daniels) has been telling us that our goal was to make it past the second round since the season started.”