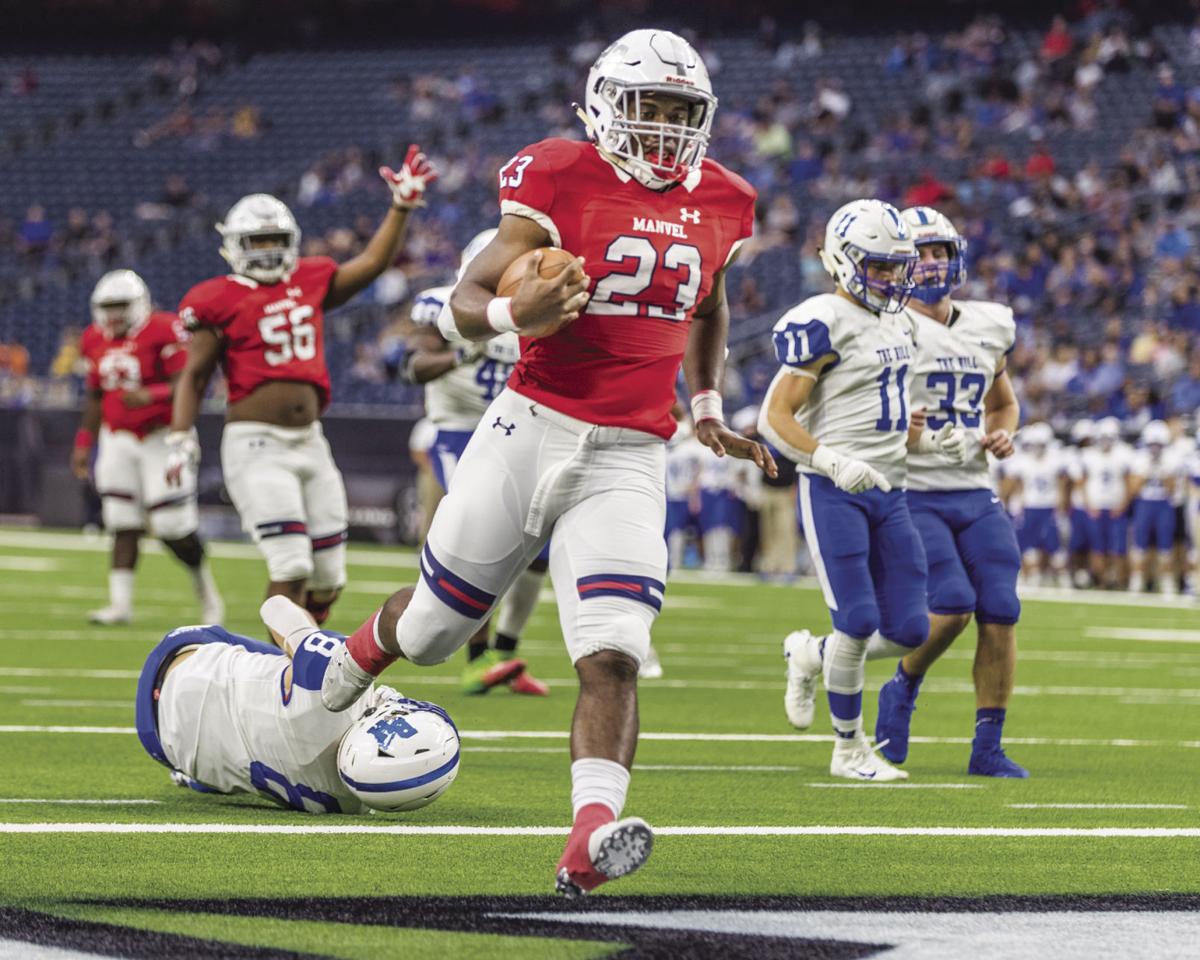 Manvel’s running back Donovan Eaglin (23) continued his postseason tear as he rushed for 288 yards and scored five touchdowns in his team’s 55-35 victory over Barbers Hill in Friday’s Region III-5A Division II Football Semifinal Playoff game at NRG Stadium in Houston. 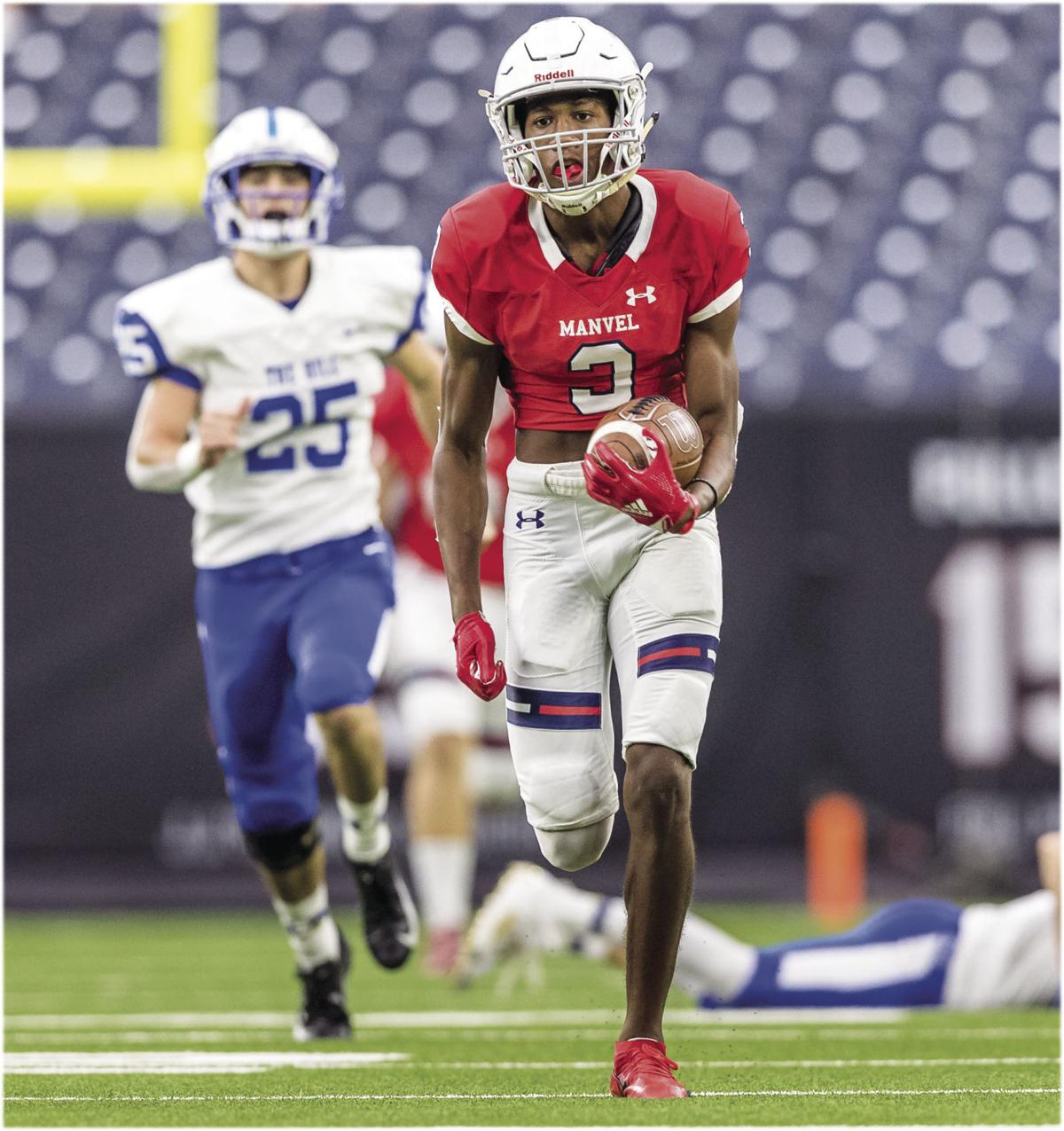 Manvel’s running back Donovan Eaglin (23) continued his postseason tear as he rushed for 288 yards and scored five touchdowns in his team’s 55-35 victory over Barbers Hill in Friday’s Region III-5A Division II Football Semifinal Playoff game at NRG Stadium in Houston.

HOUSTON – If Friday’s Region III-5A Division II Football Playoff Semifinal proved anything, it’s that the Manvel Mavericks’ offensive line appears to be getting stronger the deeper that Kevin Hall’s squad advances into the postseason.

The senior tailback ripped through Barbers Hill’s defense for 288 yards on just 19 carries and five TD’s, as Manvel rolled to a 55-35 third-round playoff triumph at NRG Stadium.

The victory advances the 13-0 Mavs into the state quarterfinals with Manvel meeting 11-5A rival Fort Bend Marshall on Dec. 7 at AISD's Freedom Field at 2 p.m. .

“What I saw, was my O-line punishing their D-line and our fullbacks punishing their linebackers, giving me big holes to run through,” said Eaglin, who has galloped for 731 yards during Manvel’s three playoff wins. “I had one man to beat and that’s what I did.”

Yarborough and Walthall teamed up from nine yards out on the Mavs’ opening possession and after the Eagles tied it at 7-7 on Hill signal caller Christian Kaopua’s two-yard run, the MHS duo struck again two plays following the ensuing kickoff. Walthall turned a short slant route grab into a 72-yard ramble to give Manvel the lead for good at 14-7 midway through the opening period.

After Malcom Taylor recovered a fumble for Manvel on a muffed Barbers Hill punt return, Eaglin promptly motored 24 yards for his first touchdown to make it 21-7 with 3:07 still left in the first quarter.

Kaopua, who delivered a big game of his own on the ground with 207 yards, tried to keep the Eagles in the thick of things with a four-yard keeper to cut

to 21-14. However, Eaglin exploded 72 yards to the end zone on Manvel’s next series and after the Mavs’ defense held Barbers Hill on downs near midfield, Yarborough converted the field position change into a 25-yard scoring fling seven plays later to Jalen Paxton for a 34-14 Manvel lead with 8:21 left in the second quarter.

The teams then exchanged touchdowns just before the break. Eaglin rambled 67 yards to pay dirt, while Kaopua went in from eight yards out to make it a 41-21 contest at intermission.

The Kaopua keeper did little to stifle Manvel’s momentum in the second half, though. The Mavs easily recovered Barbers Hill’s onside kick attempt to open the third quarter and Eaglin sprinted 23 yards for a 48-21 Manvel cushion.

Kaopua added a 67-yard scoring dash for his fourth rushing TD, but Eaglin broke loose for number five from 54 yards out to put a capper on things with four minutes left in the contest.

“I also couldn’t be more prouder of the catches and throws that we made. I was disappointed in the last touchdown we gave up. I think we relaxed and it frustrates me. We can’t do that. We gave up too many big runs on quarterback scrambles. We got to fix that.

“But we’re still practicing Monday and that’s all I care about.”