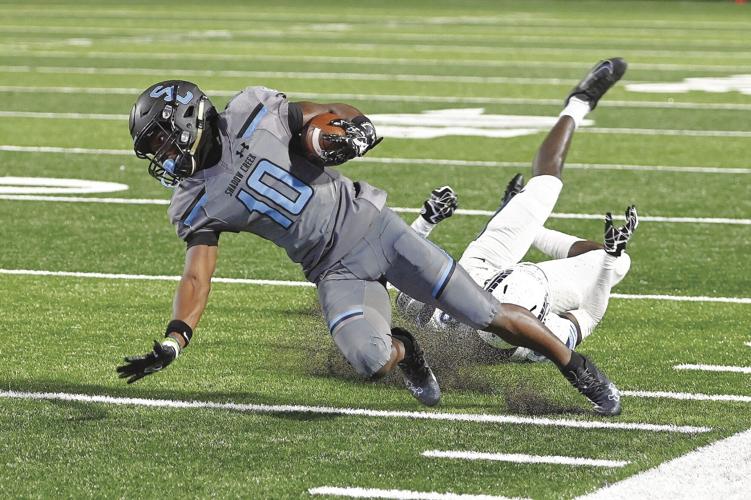 Shadow Creek's Christian Seriale (10) attempts to keep his footing after hauling in a reception during Friday's 23-6A Football affair with Alief Elsik in Iowa Colony. Shadow Creek's Christian Seriale (10) attempts to keep his footing after hauling in a reception during Friday's 23-6A Football affair with Alief Elsik in Iowa Colony.

The victory kept the Sharks (6-0 overall, 3-0) unbeaten and also helped Brad Butler’s squad keep pace with 23-6A co-leader Dawson in the 23-6A Football standings.

The Eagles outlasted Strake Jesuit 52-44 on the road, Friday in Houston.

Tylik Burton busted loose for a 16-yard gain on the game’s first play from scrimmage and two plays later, the junior running back sprinted 30 yards to the end zone just 58 seconds into the contest.

Aiden Bui booted the extra point through the uprights for a 7-0 Sharks’ lead.

The Sharks’ defense then forced the Rams to go three-and-out on the ensuing series, paving the way for a seven-play, 69-yard march by Watson and company.

Burton hauled in a 10-yard toss from Watson and dashed 27 yards into Elsik territory. A personal foul by the Rams on the Burton run moved the ball into the red zone and Watson later found Ashton Jones with an eight-yard scoring strike with 6:50 still left in the opening period.

Bui added the PAT for a 14-0 Shadow Creek cushion.

Things were going so much the Sharks’ way in the first half that even when they lost the ball on a strip sack of Watson in the second quarter, it proved to be only temporary with the Rams fumbling the ball right back to Shadow Creek on the same play.

Watson went in from two yards out on a keeper five plays following the above chain of events to make it 21-0 with 10:37 remaining in the second.

A botched punt snap by the Rams allowed the Sharks to immediately take over at the Elsik 11-yard line and Watson then outraced defenders to the end zone on the next play to make it 28-0 with 8:38 left in the second.

While Elsik picked up a first down on its next series on Eric Dadzie’s 12-yard toss to Je`Sean Keys, the Sharks eventually forced another punt and the offense drove 67 yards in seven plays for their fourth score of the first half.

Watson hooked up with Joshua Best for 24 yards inside Elsik territory, while a defensive pass interference call set up the Sharks at the Rams’ 11-yard line. Justin Qualls capped the scoring drive with a six-yard run, increasing the lead to 35-0 with 3:33 left.

The Rams were already going into the locker room with a five-touchdown deficit, only to see their situation grow more nightmarish, as another fumble led to Christian Seriale’s one-yard run for a 42-0 SC advantage at intermission.

Shadow Creek padded its lead to 49-0 early in the third on Nigel Pringle’s’s 68-yard punt return, while the third Elsik fumble of the evening set up Qualls’ 15-yard scoring run.

The Sharks added another TD early in the fourth quarter and the Rams avoided the shutout with a Dadzie scoring pass with five minutes remaining in the contest.