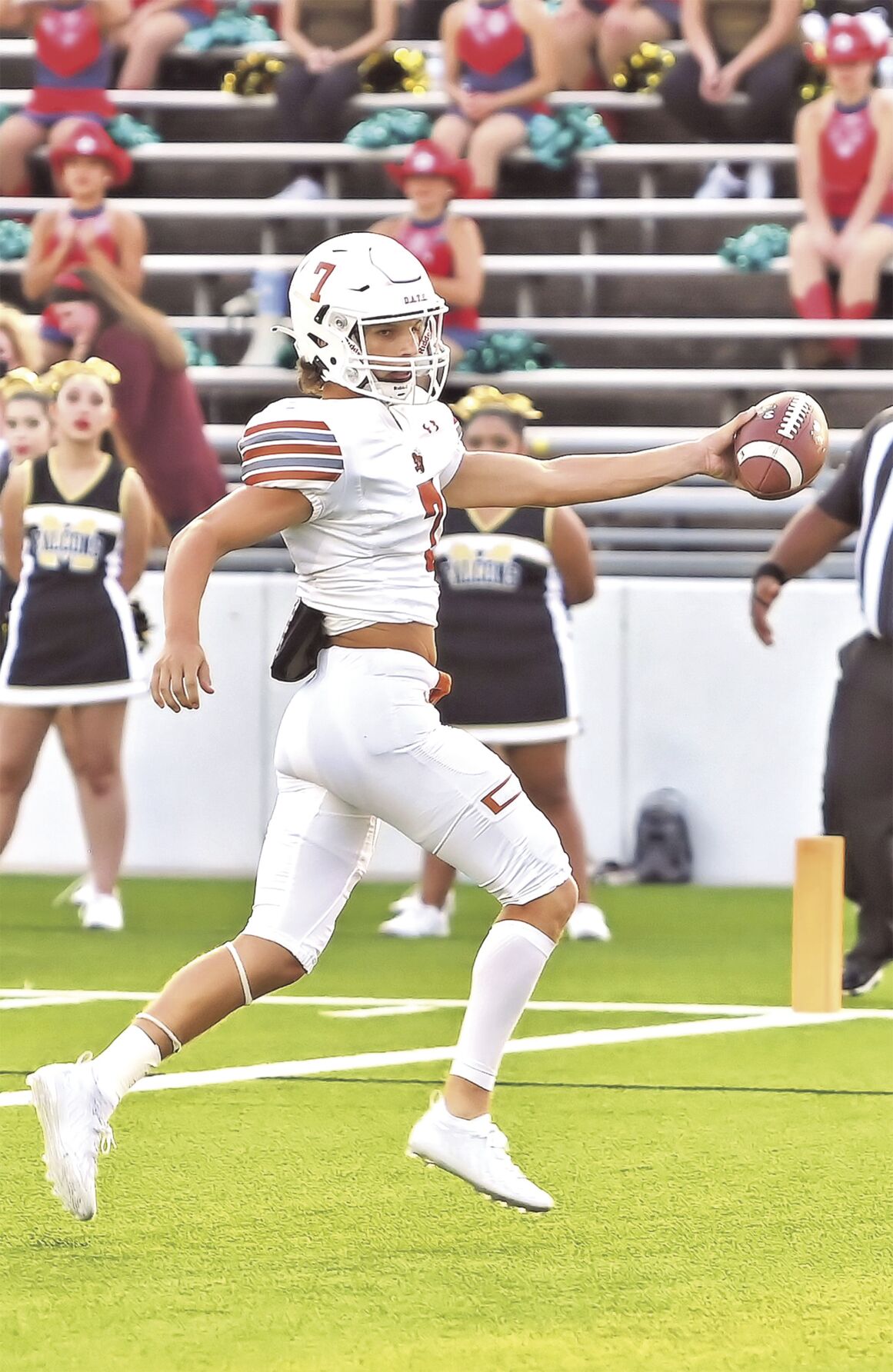 Yellowjackets' quarterback Trevor Bockel (7) stretches the ball out after scoring on a 9-yard keeper in the first quarter of Friday's non-district football contest in Pasadena. Bockel paced Alvin with 79  rushing yards and two TD's, while throwing for another 26 yards through the air in the Jackets' 40-14 triumph. (Photo by Michael Edmonds) 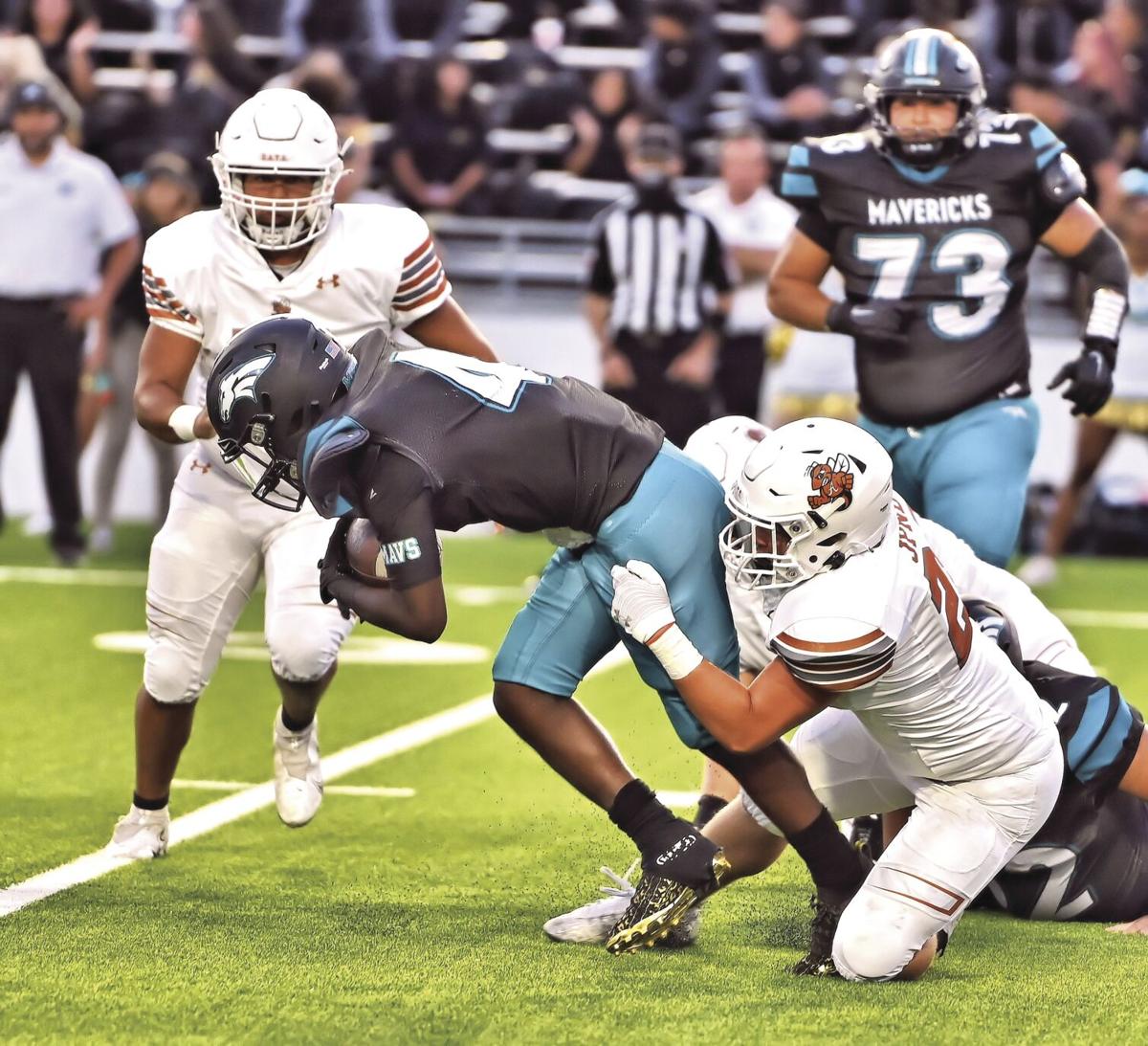 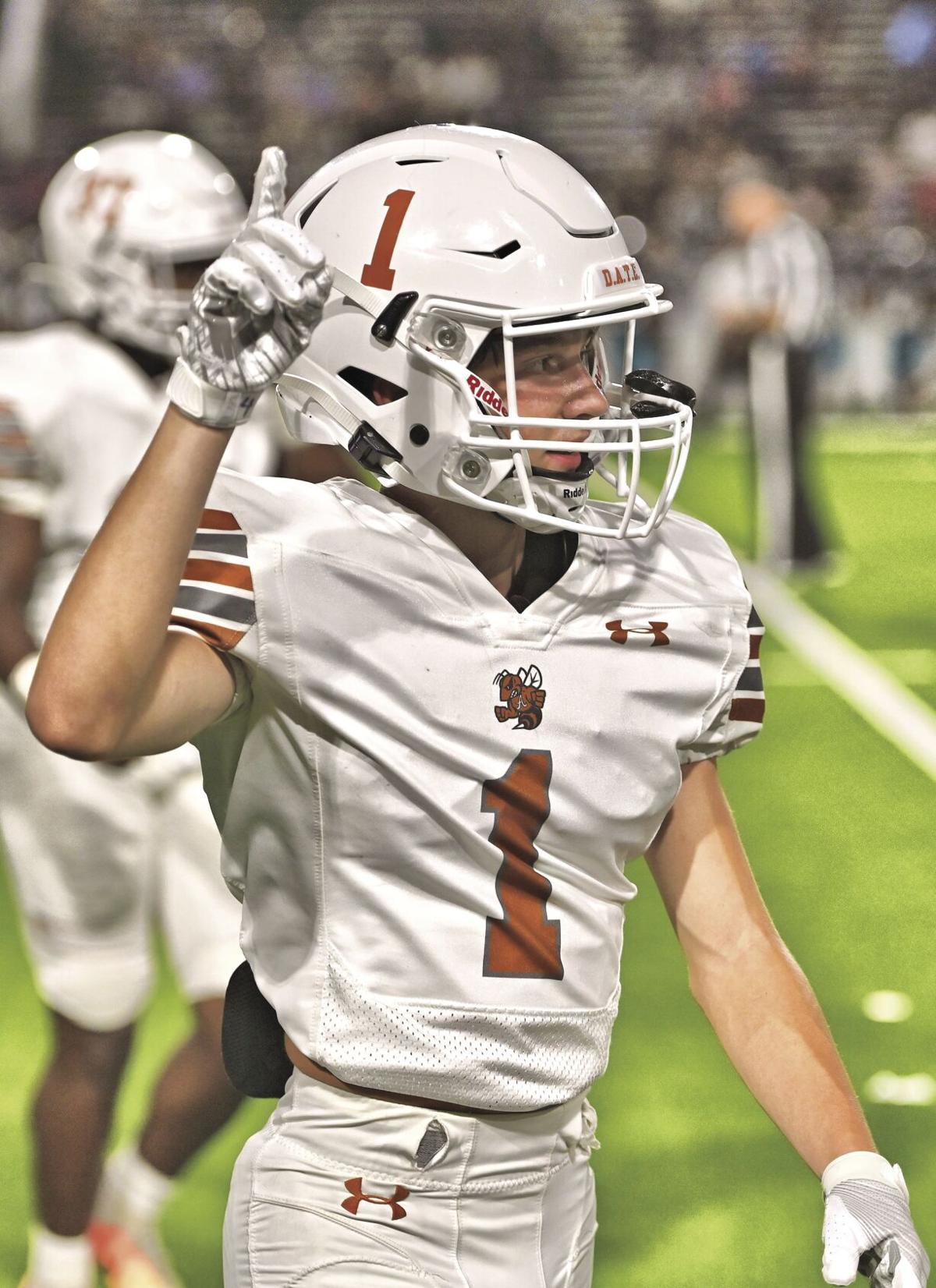 Jackets' receiver Joseph Palermo (1) lets everyone know who's No. 1 after Alvin knocked off Pasadena Memorial 40-14 Friday night to improve to 2-1.

Yellowjackets' quarterback Trevor Bockel (7) stretches the ball out after scoring on a 9-yard keeper in the first quarter of Friday's non-district football contest in Pasadena. Bockel paced Alvin with 79  rushing yards and two TD's, while throwing for another 26 yards through the air in the Jackets' 40-14 triumph. (Photo by Michael Edmonds)

Jackets' receiver Joseph Palermo (1) lets everyone know who's No. 1 after Alvin knocked off Pasadena Memorial 40-14 Friday night to improve to 2-1.

PASADENA - The Alvin Yellowjackets are receiving a much deserved bye week after winning their second straight for the first time since 2017.

For Pasadena Memorial, they’re probably relieved to be taking the rest of the year off against the Jackets’ flex bone attack and bone charring defensive blows.

Alvin gave plenty of reason for such concern on the other sideline after hammering the Mavericks 40-14 Friday night at Veterans’ Memorial Stadium.

Improving to 2-1, the Jackets moved over the .500 mark for the first since topping Fort Bend Austin and Clements in weeks two and three of the 2017 gridiron campaign. The 40 points were also the most since the above contest against the Rangers when Alvin put 63 on the board.

“We talked all week about the need of getting off to a good start,” Jackets’ head coach James Gage said following the game. “We get ourselves backed up sometimes to a slow start and I told the guys let’s change things up a bit. We took a shot early.”

Alvin changed things up by attempting a surprising first down pass on the game’s opening possession. While Trevor Bockel’s fling fell incomplete, the Jackets proceeded to march 75 yards in eight plays behind the flex bone.

Deyshawn Peterson rambled for 25 yards on the play following the incompletion, while Bockel scooted 33 yards with a keeper to the Mavs’ 25-yard line. Cole Erndt chipped in a 10-yard first down carry on the series, which Bockel capped with a 9-yard touchdown run with 8:33 left in the first quarter for a 6-0 Alvin lead.

Bockel paced Alvin on the ground with 79 yards on eight carries and two TD’s and Peterson added 73 yards on 11 carries.

“We thought we would be able to run the option on those guys,” Gage said. “Trevor did an outstanding of executing and our backs and receivers did an outstanding job of blocking on the perimeter. We just executed at a high level tonight. I was real proud of our offense.”

Memorial immediately appeared to be on the move for the tying score on their initial series, as well. Signal caller Hayden Stallings hooked up with Corey Johnson for a 34-yard gain to the Alvin 40. The Mavs got as close as the 27, but linebacker Easton Winfield broke free to knock the ball loose from Stallings on an attempted pass and linebacker Wyatt Stinson picked up the fumble and dashed 75 yards to the end zone.

Caleb Reed booted the extra point through the uprights to increase the margin to 13-0 with 5:31 still remaining in the first.

The Jackets’ special teams then came up with the big play to provide another double digit turnaround late in the second period. Maison Garcia blocked a 38-yard field goal attempt by Memorial’s Elvis Castro with Carson Robl advancing the loose ball to the Alvin 43-yard line.

Alvin used 12 plays to convert the turnover into points, using runs by RJ Jarvis, Daniel Blume, Peterson, Erndt and also a fourth down conversion run by Bockel, who later fired to Blume from 13 yards out  for a 20-0 Jackets’ lead at intermission.

“You look at your defense. You get the early sack, scoop and score,” Gage said. “That was just a huge momentum deal early in the first quarter. We went seven straight quarters without giving up a point. When the defense needed to make the big stop, they did.

“Just an overall good game played by us. We will still find some mistakes that need to be corrected for next time. The blocked field goal was big too, because it would have been a 10-point game instead of a 20-game at halftime.”

Memorial never recovered from the above chain of events, going three-and-out to start the second half. The Jackets promptly drove to their fourth TD, as Erndt raced 23 yards untouched to make it 27-0 after taking the option pitch from Bockel to cap the five-play, 43-yard series with 8:34 left in the third.

Following a defensive fourth down stop by Gavin Guthrie deep in Alvin territory, Alvin padded the margin to 34-0 on Bockel’s 2-yard keeper early in final period.

The Mavs finally broke up the shutout bid a little later on Jayvian Nowlin’s 5-yard run, but the Jackets answered with RJ Freeman’s 4-yard run.

In subvarsity, the Jackets won three of four games on Thursday against Memorial. The junior varsity orange rallied from a 28-7 deficit to capture a 41-34, while the freshman orange (7-6) and freshman white (12-7) emerged victorious as well and the JV white dropped a close 18-12 contest.