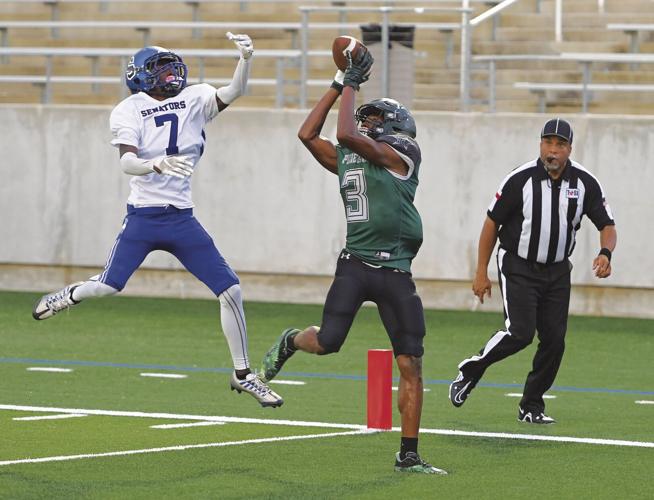 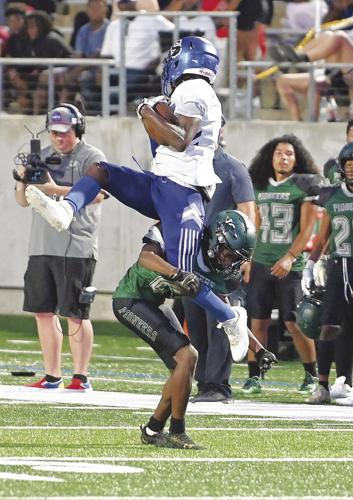 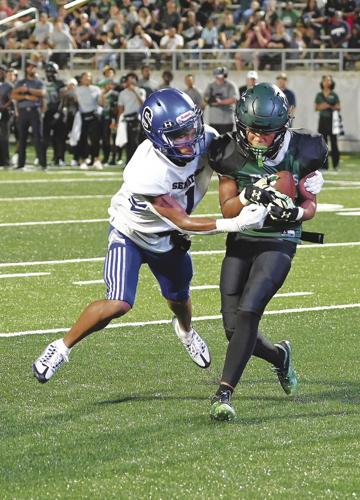 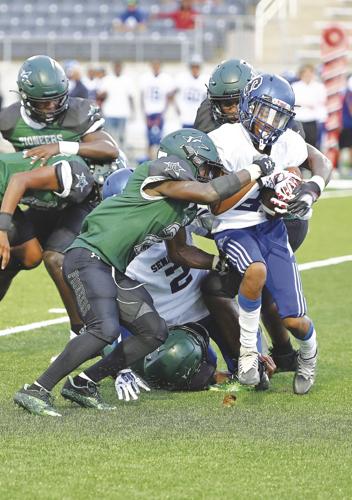 The Iowa Colony Pioneers' defense surrounds a Kipp Sunnyside ball carrier during their 26-7 triumph, Thursday at Freedom Field. The win was the Pioneers' first in school history. (Photo by Michael Edmonds)

The Iowa Colony Pioneers' defense surrounds a Kipp Sunnyside ball carrier during their 26-7 triumph, Thursday at Freedom Field. The win was the Pioneers' first in school history. (Photo by Michael Edmonds)

IOWA COLONY - Newcoming night proved to be a history-making evening for the Iowa Colony Pioneers on more than a few fronts.

Not only did the Pioneers picked up their inaugural victory in school history with a 26-7 home-opening triumph over Kipp Sunnyside, Thursday at AISD Freedom Field, the win was also the first for Ray Garza as a head coach.

With the program currently fielding only sophomores and freshmen in their first year of operation, Garza’s squad also became the youngest varsity squad in Alvin ISD history to win on the gridiron. Garza’s hiring  to the school district’s fourth high school during the offseason already complete a history making cycle with the former Alvin Yellowjacket tight end then serving as an assistant coach for both Manvel and Shadow Creek football programs.

The Pioneers evened their record at 1-1 after dropping a 51-7 decision at Fort Bend Christian in their Aug. 26 opener.

“Man this is exciting, because these kids have been working hard all summer,” said Garza, who was proudly clutching the first ever victory game ball for the trophy case following the contest. “The coaches also worked hard and it came together tonight.  It’s real special for the kids to work hard and come out here and get the first win for the school.

“It’s a special night and a special thing for this school that no one can ever take away from these kids.”

Iowa Colony converted three Senator miscues into touchdowns with Sunnyside muffing a punt following the Pioneers’ second possession for the game’s initial break. Henry Kalu recovered the loose ball for IC at the Senators’ 20-yard line. While later faced with a fourth-and-14 from the Sunnyside 26, Pioneers’ signal caller Kamal Henry perfectly lofted a strike to Antoine Martin, who made an impressive two-handed grab on a fade route over Senators’ cornerback Kelly Smith in the end zone’s left corner.

The extra point attempt misfired, but Iowa Colony still held its first lead ever at 6-0 with 48 seconds left in the opening period.

“We were able to take advantage of some turnovers that gave us good field position,” Garza said. “Offensively we were able to capitalize on that. I think together as a unit we had some good times and a few times when we need to work on some things, especially finishing on some tackling and ball security type deals.

“But overall the kids overcome those issues and kept fighting.”

Sunnyside’s offense finally got going on the ensuing possession, thanks to quarterback Timothy Carter converting a third-and-12 situation by hitting Zhari Thomas for a 15-yard gain to the IC 47-yard line. Rodrick Samuel also rambled for 18 yards in the series and Carter capped things with a 25-yard keeper with 10:11 remaining in the second.

Eduardo Salgado’s PAT gave the Senators their first lead at 7-6.

Despite turning the ball over deep in their own territory on the next series, Iowa Colony got the ball right back three plays later and marched 47 yards in seven plays for the go ahead score.

After Henry’s 20-yard scramble and Jacody Miles’ 18-yard catch and run put the Pioneers well inside the redzone, a holding call wiped out Miles’ two-yard scoring run. However, Henry came back two plays later to drill Martin with a 13-yard fling to regain a 12-7 lead for the Pioneers with 3:10 left before intermission.

Things then went from bad to worse for Sunnyside, as they not only went three-and-out on their next possession, a botched punt snap also gave Iowa Colony the ball at the Senators’ 18. Three plays later, Henry hooked up with Landrew Ward on a slant from five yards out and Miles crossed the goaline on a two-point conversion run to increase the Pioneers’ lead to 20-7 at the break.

Iowa Colony’s defense held the Senators off the board the rest of the way, while Miles added a 14-yard insurance TD run midway in the fourth.

Henry accounted for 118 yards of total offense (63 passing, 55 rushing) and three TD’s. Miles rushed for 76 yards on 15 carries and one TD. Chandler Love picked off a Carter pass and Mason Brown joined Kalu with a fumble recovery.