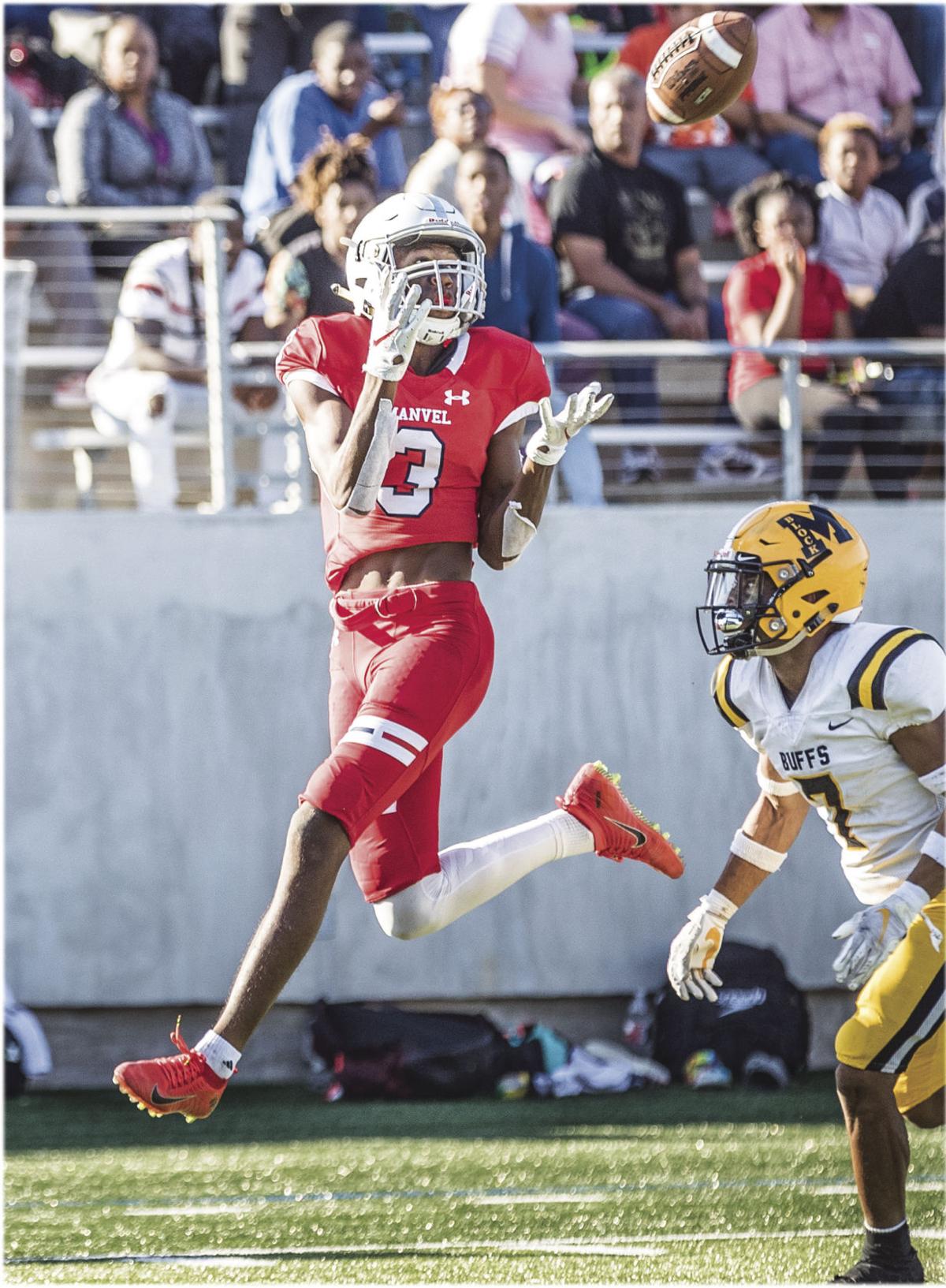 Manvel’s Jalen Walthall (3) makes a leaping touchdown catch over Fort Bend Marshall’s Syl Labome (7) during the second quarter of Saturday’s Class 5A Division II State Football Quarterfinals at Alvin ISD’s Freedom Field in Iowa Colony.  Unfortunately, the Mavericks were held out of the end zone the rest of the way in a frustrating 40-10 season-ending loss to Marshall. 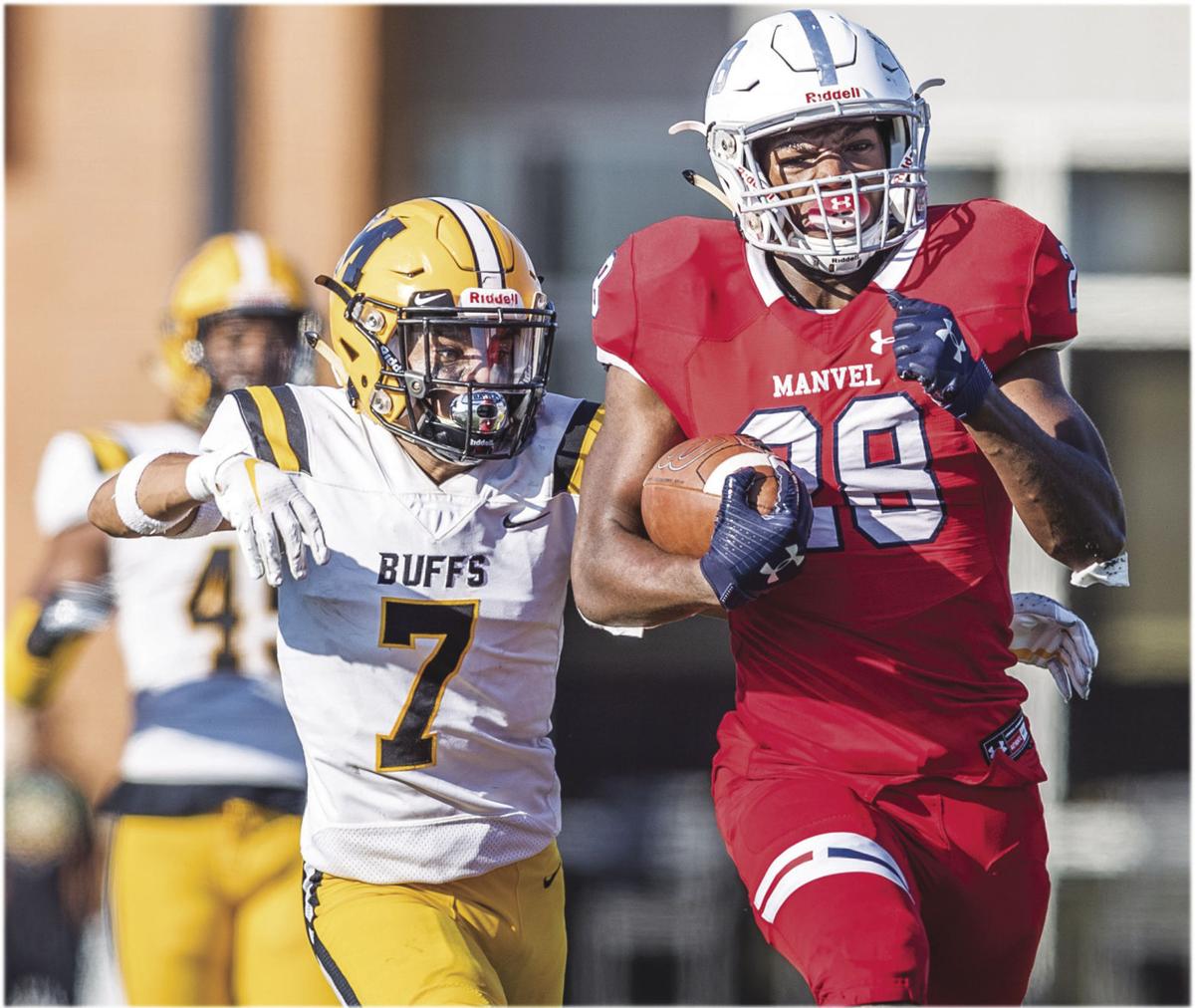 Manvel’s Jalen Walthall (3) makes a leaping touchdown catch over Fort Bend Marshall’s Syl Labome (7) during the second quarter of Saturday’s Class 5A Division II State Football Quarterfinals at Alvin ISD’s Freedom Field in Iowa Colony.  Unfortunately, the Mavericks were held out of the end zone the rest of the way in a frustrating 40-10 season-ending loss to Marshall.

IOWA COLONY - Another classic was produced in the Manvel-Fort Bend Marshall football rivalry.

Only this time it was the Buffalos stealing the show, as Malik Hornsby and Devon Achane provided the telling blows in a 40-10 Marshall victory in the Class 5A Division II State Football Quarterfinals Saturday afternoon at AISD’s Freedom Field.

Manvel ends its season at 13-1, while Marshall (13-1) advances to play either Corpus Christi Calallen or Boerne Champion in the state semifinals later this week.

While the Mavs had topped Marshall by a 38-34 count in the regular season, Manvel simply had no answers for either Hornsby or Achane in the rematch and was also unable to recover from a slow start on the offensive side.

Quarterback Tucker Yarborough found Jalen Walthall for an 18-yard completion on the game’s opening series, but Manvel was forced to punt the ball away and Achane took the wildcat snap from center and exploded 71 yards for a 7-0 Marshall lead with 8:02 left in the first period.

John Abernathy delivered a key sack for the Mavs’ defense to stop a Marshall scoring threat amd Manvel then moved into Buffalo territory a few minutes later. However, the Marshall defense intercepted a Yarborough pass on fourth-and-13 at the Buffs’ 20-yard line and things began to go downhill fast for the Mavs.

Achane went in from a yard out with 8:20 remaining in the second for a 14-0 Marshall lead and after forcing a Manvel punt, Hornsby went to work. The Marshall signal caller hit a wide open Brandon Tryon at the Buffs’   30-yard and Tryon sprinted the remaining distance untouched for an electrifying 91-yard catch-and-run to increase Marshall’s advantage to a stunning three-touchdown cushion.

Hornsby accounted for 399 yards of total offense under center and two TD’s to complement Achane’s 132 yards on the ground and four scores.

Jordon Vaughn’s 62-yard burst finally helped the Mavs get on the board on their next possession, as Walthall hauled in a 15-yard TD pass from Yarborough to cut the margin to 21-7 with 4:45 left before the break.

Achane went in from two yards out to answer the Yarborough-to-Walthall score, though, and despite Luis Moreno closing the first half with a 24-yard field goal to pull Manvel within 28-10, the Mavs would get no closer.

Hornsby capped the opening drive of the second half with a 26-yard TD pass to Jamaal Ulmer on fourth-and-16 and Achane dashed 10 yards with 3:16 left in the third to account for the final margin.

Mavs’ senior tailback Donovan Eaglin, who rushed for 751 yards and 12 TD’s during the first three rounds, added 110 yards in Saturday’s contest. Yarborough completed 13 of 26 passes for 143 yards and one TD, while Walthall grabbed six receptions for 90 yards and one TD.

Manvel had posted playoff wins over Nederland (49-14), Lamar Consolidated (62-34) and Barbers Hill (55-35) to advance into the fourth round of the playoffs. Kevin Hall’s squad will likely move back into the Division I format of Class 5A when the UIL releases its realignment in February.