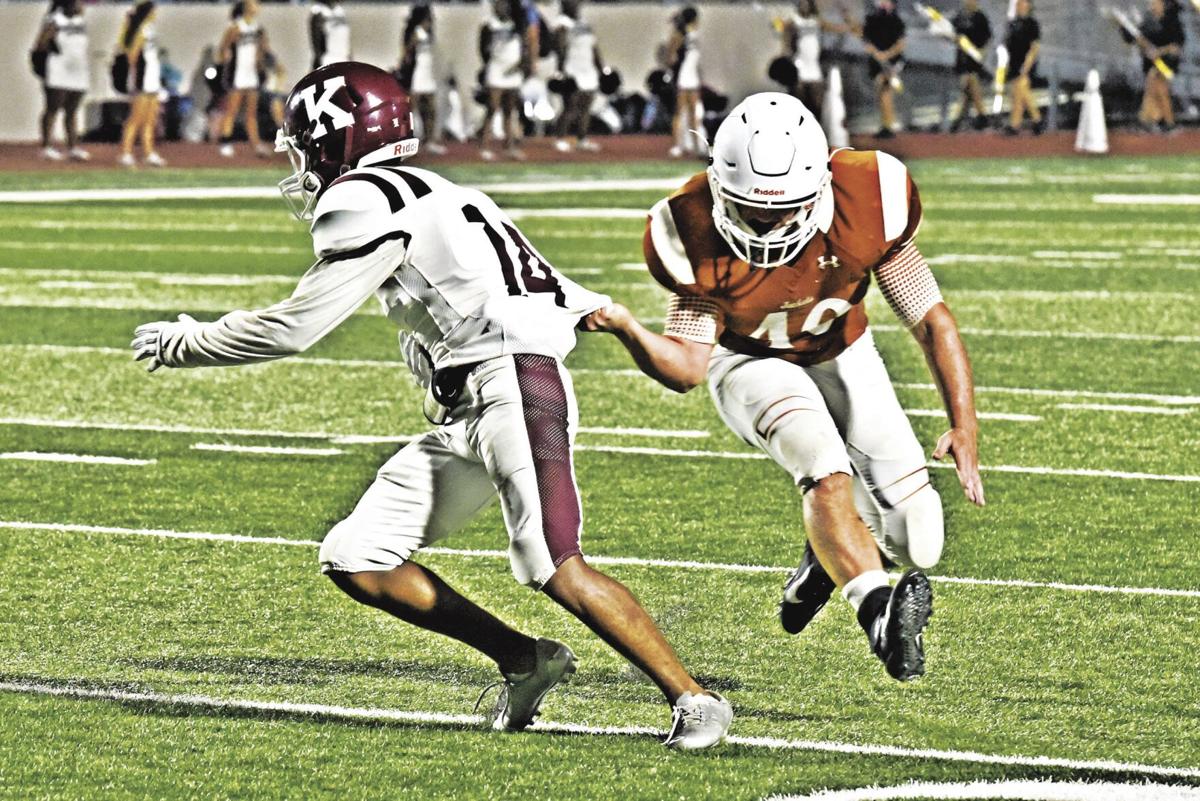 The Alvin Yellowjackets and other 6A and 5A gridiron programs will practice for the first time on Sept. 7 with the first games being played on Sept. 24. (Photo by Michael Edmonds) 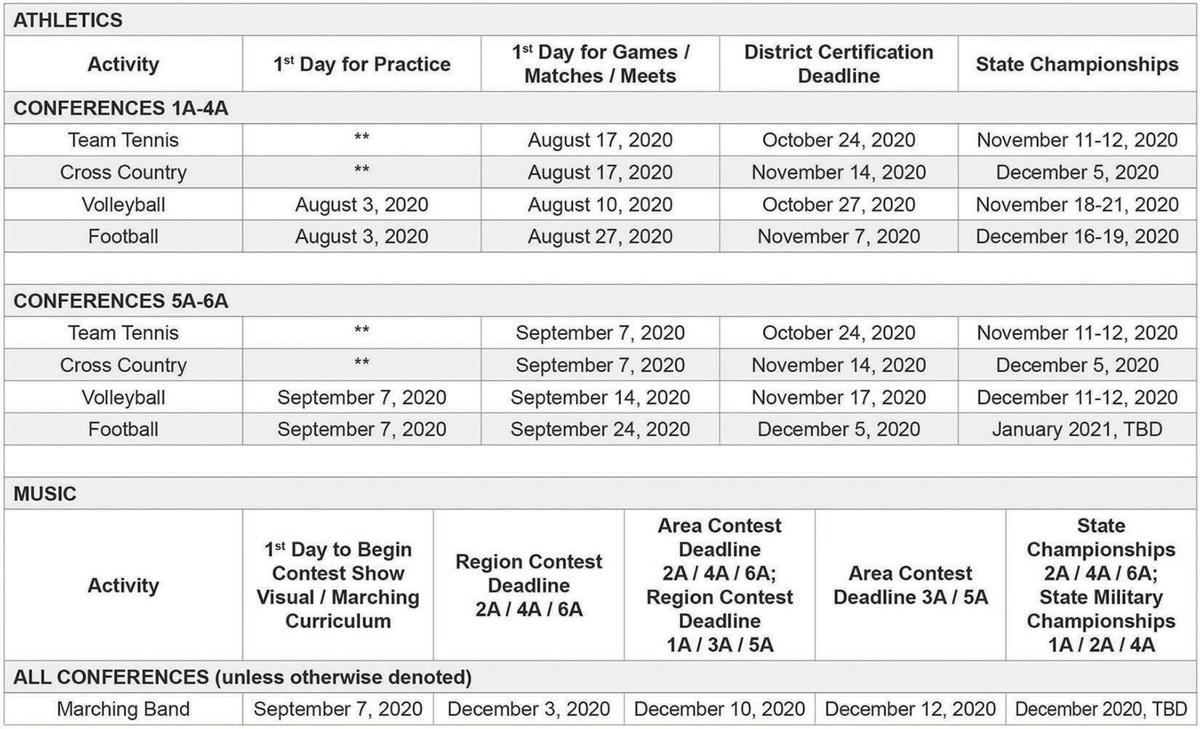 The Alvin Yellowjackets and other 6A and 5A gridiron programs will practice for the first time on Sept. 7 with the first games being played on Sept. 24. (Photo by Michael Edmonds)

The state’s governing body for high school athletics said in a press release that “the modifications to the 2020-2021 calendar differ by activity and conference. These adjustments reflect the public health situation at this time and the varying numbers of COVID-19 cases across different geographic areas of the state.”

The UIL will also be having its state football championships played in January for the first time ever, while volleyball won’t be playing in any tournaments this school year. However, teams will be allowed to play three matches per week to gain additional competition in their respective schedules. The volleyball state tourney will be played in December.

“Kudos to our amazing University Interscholastic League,” the second-year coach said. “The Yellowjackets will continue to stay-the-course with our impressive protocol that is constantly taught, admonished and expected by our amazing coaching staff and athletic trainers. We are so excited that the 2020 football season is right around the corner.

“Alvin is very fortunate with regards to our schedule. Our only possible change could be in week two with Kempner in non-district. If that becomes the case, we will proudly change course and play Pasadena Sam Rayburn in that spot.”

“This news gives us all something to plan for and hopefully this virus will calm down and we can make it through the season and school year,” Butler said. “We are going to take the next few days and see what decisions some of the other districts make that may impact our schedule and adjust from there. I visited with several coaches yesterday and we are all trying to see how the dust settles.

“I know we are all pleased with the decisions of the UIL and THSCA and thankful to get the opportunity to see how this unfolds. I love football and high school athletics, but we are always going to strive to keep the safety of our students, teachers and their families at the front of our decision making process.”

Alvin ISD Athletic Director Michael Bass said UIL athletic director Susan Elza stated at the statewide AD meeting last week “that their goal was to have a (regular season) 10-game schedule for football and if the playoffs needed to go into January, they would do it.”

“I take my hat off to Dr. Elza, (assistant athletic director) Brian Polk and (executive director) Dr. Charles Breithaupt for the work they put in to come up with a plan that will work,” Bass said. “If you polled every coach in the state of Texas and the student-athletes, we would have loved to finish the season for football in December.

“However, I could not image the decision process they had to go through. It’s not only about the gulf coast, but also about the panhandle, East Texas and South Texas. All these different districts are trying to mesh together. The idea of playing Christmas Eve, you go son of a gun. You know what though, hopefully we will blessed to be in that direction with our schools. It will be a great Christmas Eve or day after Christmas.

“The UIL did the best they could to make it work and this is the best plan they could come up with.”

Basketball will also be affected by the changes. Teams won’t be allowed to compete in any tournaments or showcases and even the regional tournament will be split  up.

The girls’ regional semifinals is slated for Feb. 22 or Feb. 23 with the regional finals following on Feb. 26 or Feb. 27. The state tourney will run as scheduled on March 4-6 in San Antonio. The boys’ region semifinals will be played March 1-2 and the region final follows on the dates of March 4-6. The state tourney runs as schedule on March 11-13.

This plan provides a delay for schools in highly-populated metro areas, primarily conferences 5A-6A, given the challenges with COVID-19 those communities are facing, while providing schools in other areas, primarily 1A-4A, an opportunity to start seasons on schedule.

“In a UIL press release, executive director Dr. Breithaupt said the organization’s “goal in releasing this plan is to provide a path forward for Texas students and schools.

“While understanding situations change and there will likely be interruptions that will require flexibility and patience, we are hopeful this plan allows students to participate in the education-based activities they love in a way that prioritizes safety and mitigates risk of COVID-19 spread,” Dr. Breithaupt added.

“We’re excited that the UIL released the information yesterday (June 21) for the sports of football, volleyball, cross country and team tennis,” Bass said. “For a while, there was so much unknowns. Would we have a season and if so, how many games.

“You look at a district that Manvel is in like 10-5A football alone and it involves nine schools in six different school districts. So you can image how that can become a nightmare trying to figure out how things will work.”

Mavericks’ head coach Kevin Hall echoed the above sentiment, saying “This fall is kind of like the weather in Texas.  If somebody doesn’t like it, wait five minutes and it will change.”