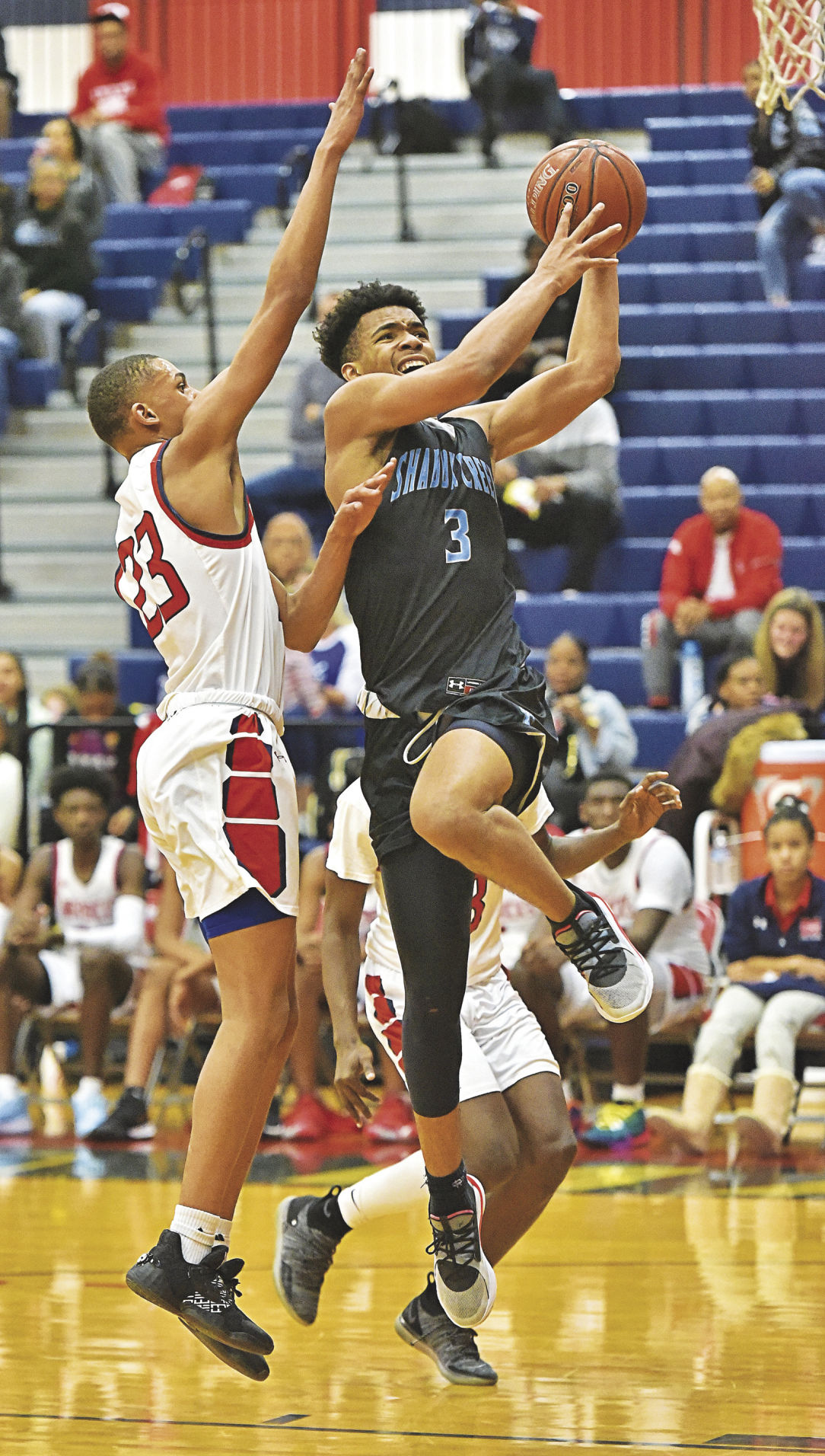 Shadow Creek's Ramon Walker (3), who led all scorers with 26 points, drives to the hoop with Manvel Maverick Mason McBride (23) defending on the play during Tuesday's 24-5A boys' basketball contest in Manvel. 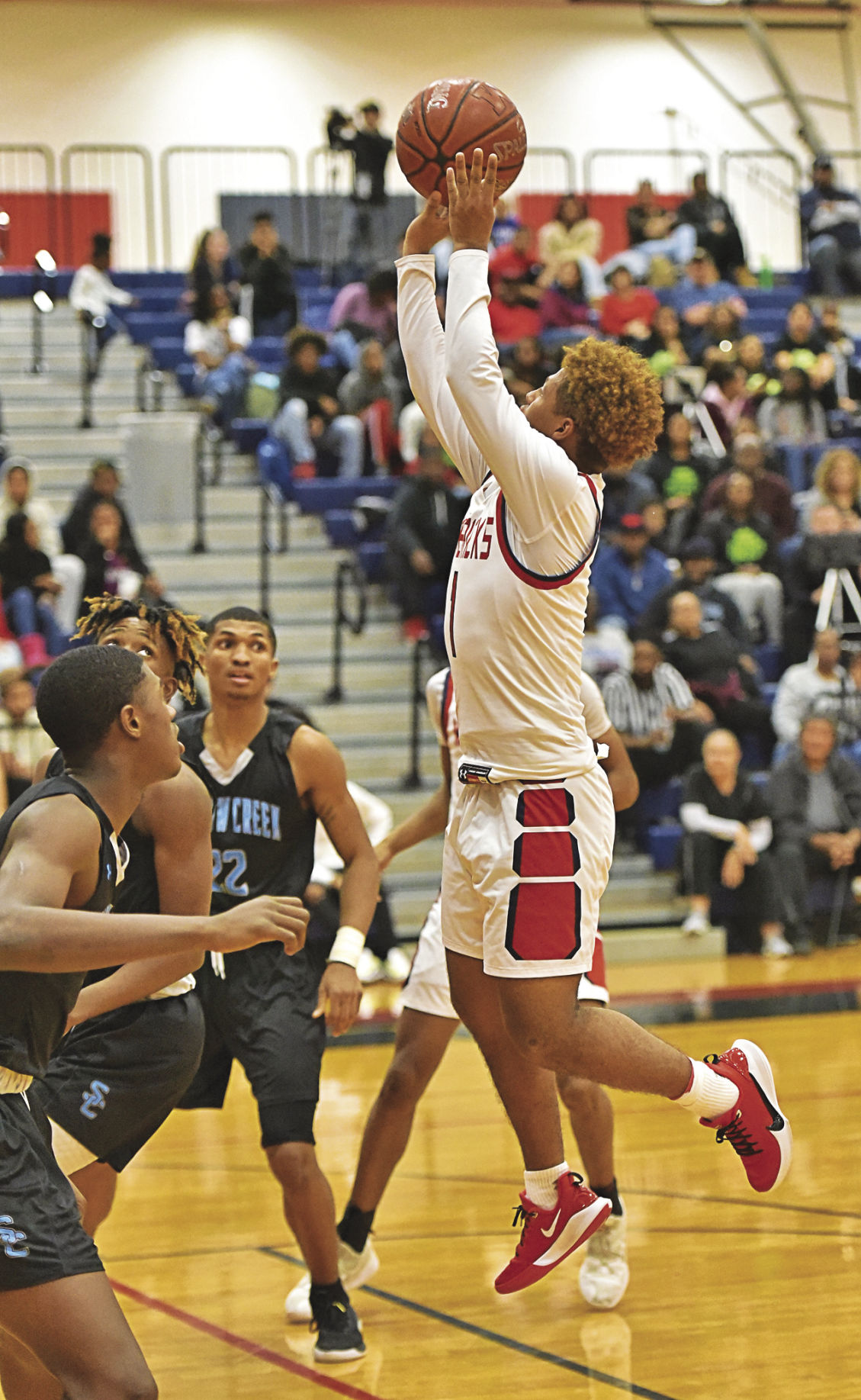 Manvel's Myles Levine (1) kept the Mavericks in the thick of things against league-leading Shadow Creek on Tuesday in Manvel with a team-high 22 points.

Shadow Creek's Ramon Walker (3), who led all scorers with 26 points, drives to the hoop with Manvel Maverick Mason McBride (23) defending on the play during Tuesday's 24-5A boys' basketball contest in Manvel.

Manvel's Myles Levine (1) kept the Mavericks in the thick of things against league-leading Shadow Creek on Tuesday in Manvel with a team-high 22 points.

The junior small forward sank an incredible go-ahead left-handed floater on a drive to the hoop in the closing seconds to pave for the Sharks to prevail in a 74-71 thriller over the Manvel Mavericks in 24-5A boys’ basketball action at the MHS Competition Gym.

“I was just hoping it would go in.”

Walker’s acrobatics capped a furious fourth quarter in which Shadow Creek overcame a six-point deficit and ultimately battled the Mavs to six lead changes in the final two minutes.

Following Walker’s field goal, Will Young (14 points) padded Shadow Creek’s lead to 74-71 on a pair of free throws with 14.01 seconds left. Manvel had a chance to tie it after calling a time out with 6.73 seconds left, but the Sharks coaxed a turnover and held on to the ball as time expired.

“We knew what to expect, because this is a rivalry game,” Sharks’ head coach David President said. “These guys come out and compete and they did a great job of getting after it and competing at a high level.

All the credit goes to Manvel, but our guys have been resilient all year. We’ve been finding ways to win. To come in on the road and get a tough one like this, we will take it any day. “

Also entering the game as the No. 2 state ranked team in Class 5A by the Texas Association of Basketball Coaches, Shadow Creek improved to 19-2 overall and 9-0 in district.

For Chris Wilson’s squad, it marked a second heartbreaking defeat at home in just a four-day span. The Mavs (16-10 overall, 4-5 in district) overcame a 13-point second half deficit to Hightower on Jan. 17 in Manvel, only to fall short by an 87-83 count in overtime.

“It was a tough one tonight. I thought we played competitively the whole night through,” Wilson said. “It really came down to turnovers, our inability to handle the ball during the last three minutes of the game. Mistakes off turnovers cost us and I think that was the big part of it.

“I think if we clean up our turnovers, then we will get back on trek. Any time you lose close games back to back in district, there’s a level of frustration. But I know my kids and they’re mentally tough to battle back in the next game. We can’t live in the past.”

Trey Hartfield and Walker sandwiched treys between Trey Lightener’s bucket for a quick 8-0 Shadow Creek lead with 5:16 left in the opening period. However, Myles Levine (team-high 22 points) sparked a 12-6 run for Manvel with a three-pointer and buzzer-beating jumper to cut the margin to 17-16.

The Mavs then erupted for nine unanswered tallies to start the second quarter behind treys by Mason McBride (12 points) and Walker and a lay-in underneath by Shaun Walker (14 points) to lead by as much as eight at 25-17 with 6:10 remaining in the period.

Ramon Walker drilled a three-pointer to cut it to 33-32 Manvel at intermission and helped the Sharks draw even at 39-39 and 41 apiece in the third period, but Levine’s trey gave Manvel a 56-50 edge heading into the fourth.

“We made a couple of adjustments (at halftime),” President said. “Early on, their zone was causing us problems. We just needed to make a little bit of an adjustment and from there, we were able to get back in the ball game.

“Zy Morite (12 points) came out and played one heck of a game. He brought us the energy that we needed. The guys just made big plays down the stretch and we were on the road in a big ball game. That’s all you can ask for.”

The Mavs next play Willowridge on Friday in Houston at 7 p.m., while the Sharks host Angleton on Friday at 7 p.m.

In other area action, the SC girls collected a 57-39 win over Manvel Tuesday night in Pearland. R`mani Taylor and Da`Nae Williams pumped in 13 points apiece and Bre`yon White added 12 points.

The Alvin Lady Yellowjackets return to action on Friday, as well, with a 7 p.m. home game against Clear Lake at 7 p.m. Alvin picked up its first district win on Jan. 17 against Dickinson by a 31-30 count. Mariah Byone and Emma Robles each scored nine points and Gabbi Church provided eight points.