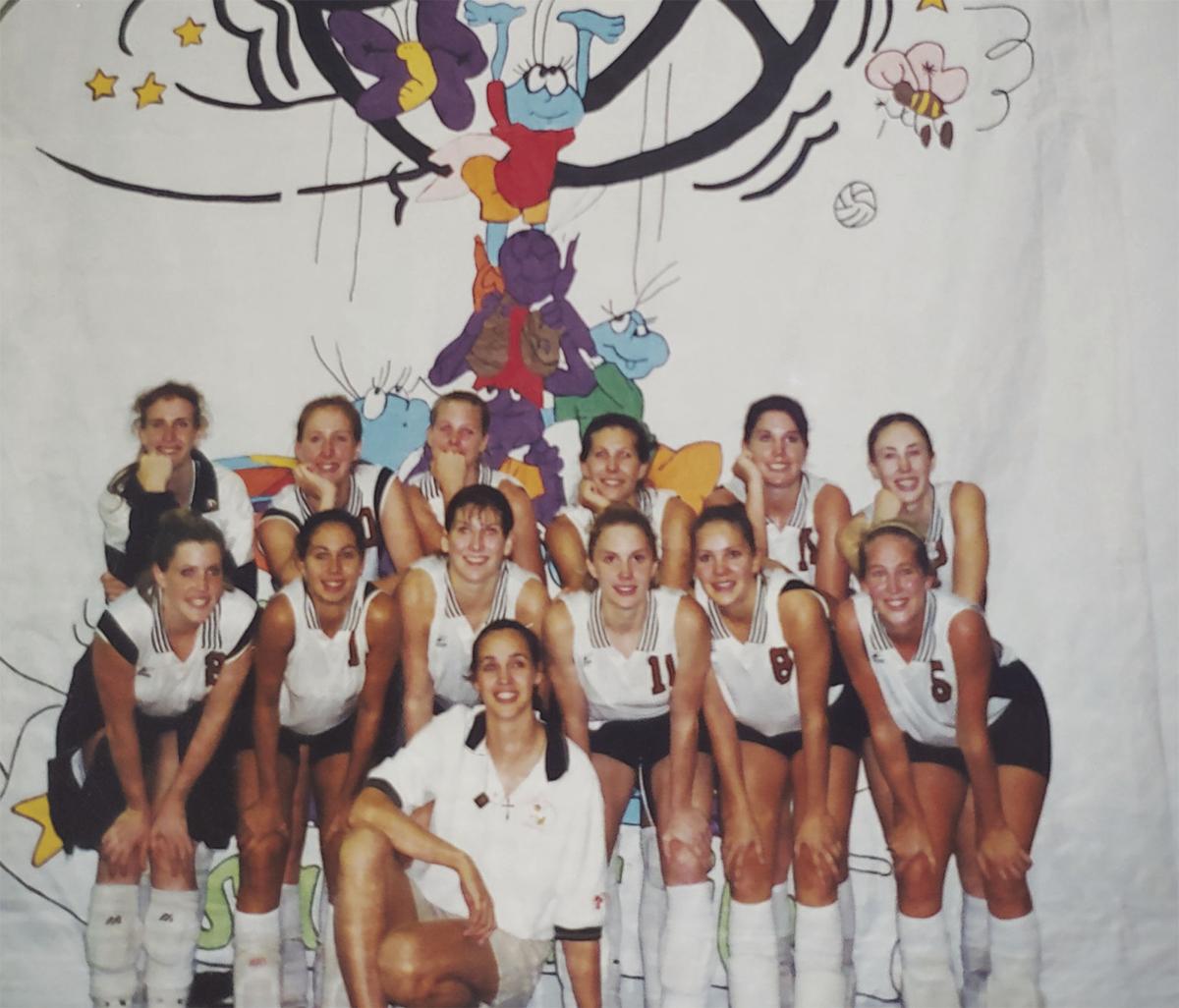 Pictured here after placing fifth at the Duncanville Tournament of Champions, the 1999 Alvin Lady Yellowjackets went on to post their first unbeaten run through district play since 1989 and finish an impressive 40-4 overall. Alvin edged Elkins and Deer Park in back-to-back regional tourney three set classics to earn their first ever trip to state. 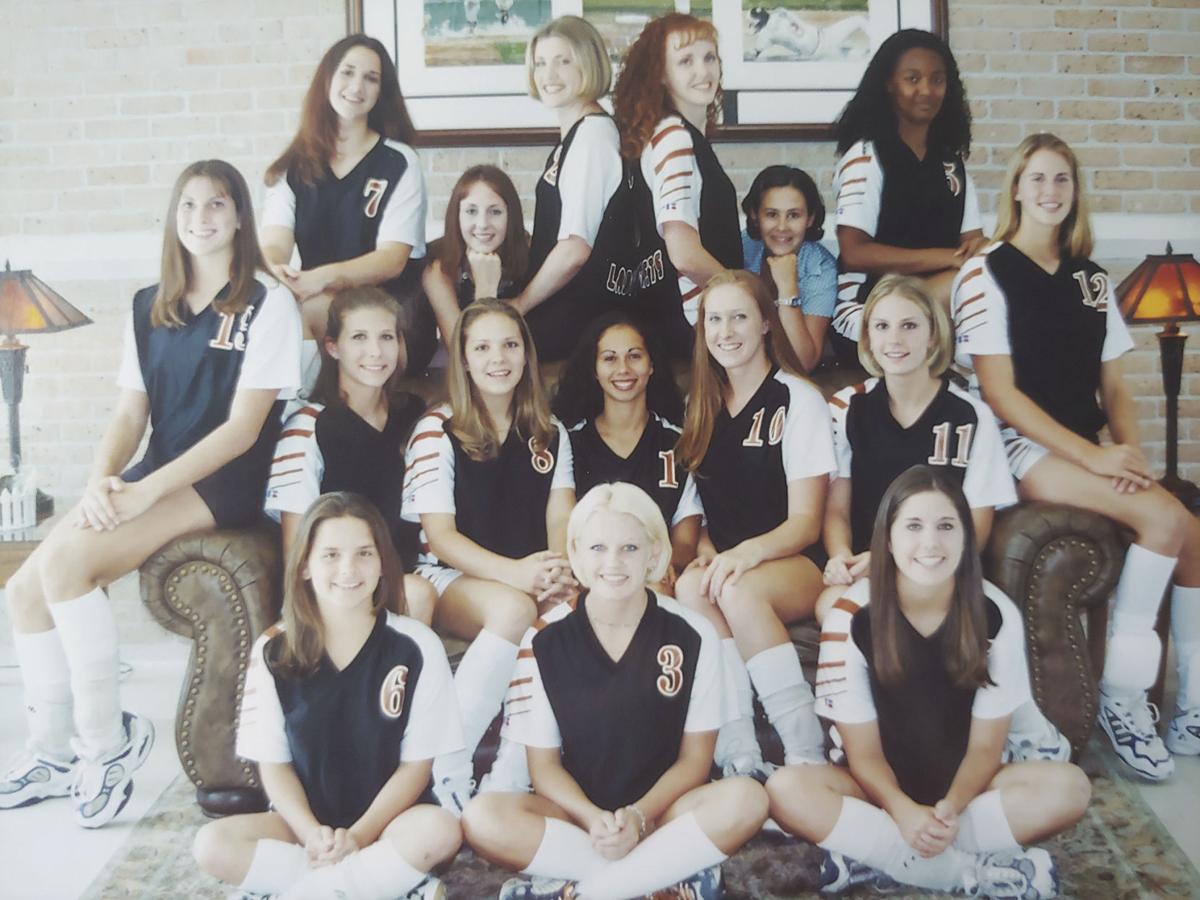 The 2000 State Semifinalist Lady Jackets maintained the program's dominance with Alvin clsoing the two-year span with an amazing 80-8 record and pair of Region III titles. The record still stands for Alvin volleyball today. 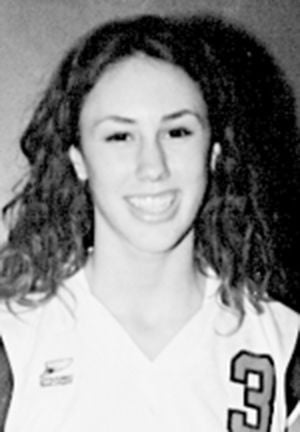 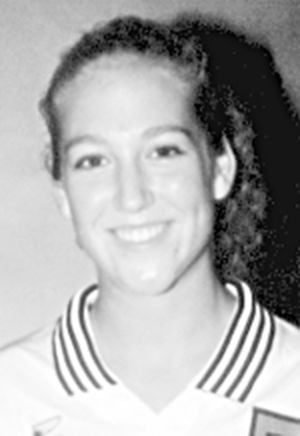 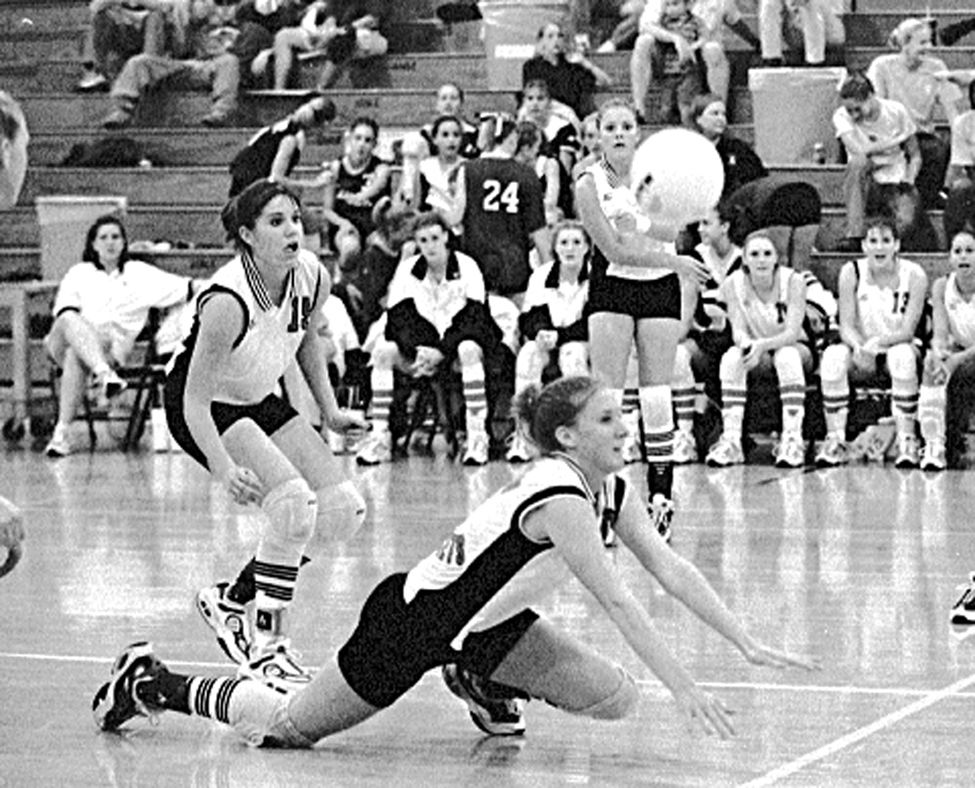 With teammates Morgan Meyer (left) and Dena Turner looking on, outstanding defensive saves like this one by outside hitter Caley Smith helped the Alvin Lady Yellowjackets deliver back-to-back 40 win seasons during the 1999 and 2000 volleyball seasons. 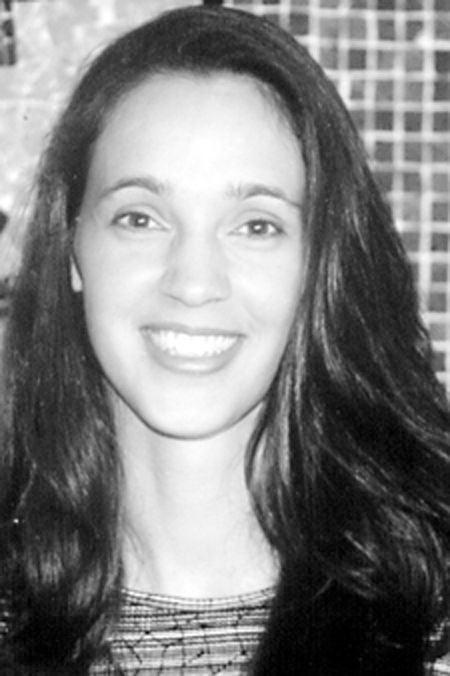 Pictured here after placing fifth at the Duncanville Tournament of Champions, the 1999 Alvin Lady Yellowjackets went on to post their first unbeaten run through district play since 1989 and finish an impressive 40-4 overall. Alvin edged Elkins and Deer Park in back-to-back regional tourney three set classics to earn their first ever trip to state.

The 2000 State Semifinalist Lady Jackets maintained the program's dominance with Alvin clsoing the two-year span with an amazing 80-8 record and pair of Region III titles. The record still stands for Alvin volleyball today.

With teammates Morgan Meyer (left) and Dena Turner looking on, outstanding defensive saves like this one by outside hitter Caley Smith helped the Alvin Lady Yellowjackets deliver back-to-back 40 win seasons during the 1999 and 2000 volleyball seasons.

The opposition often times stood an inch or two taller at the net and may also have possessed a little more raw talent on their roster.

That being said, the 1999 and 2000 Alvin Lady Yellowjacket Volleyball squads were still better.

Over that two-year span, the Houston area power went an incredible 80-8 with unbeaten records through both district and regional play and made back-to-back trips to the Class 5A State Semifinals.

“It was pretty phenomenal to win 40 matches and get to state in two consecutive years,” former Alvin head coach Katy Garza said. “We didn’t have one big superstar. We had an entire team of extremely hard working kids. I truly felt blessed to coach them. I had a great staff of (Julie)  McMinn and (Dick) Orsak most of those years and the support of (former athletic director) Sandra Howell.

“We even had seniors those two years that were not starters, but played in college. That was how deep we were. It was an incredible combination.”

While Alvin didn’t carry a six-footer in their starting lineup in either campaign, Garza’s teams found other ways to tower over their foes.

As impressive as the offensive kill numbers piled up, they loomed ever larger on the defensive side with players like Goodson, Smith, Meyer, Dena Turner, Julie Burkhalter and Rachel Scott accumulating double and triple figures in the block and dig departments, as well. Those dives to floor saves then traveled to setters Melissa Bullion, Tausha Kelly and Shelly Wilson, whose passes were soon converted into devastating smashes by the Alvin front row.

“I remember overhearing one coach give to another a scouting report on us at the Duncanville Tournament - they can serve and pass and have sound ball control,” Garza said. Hitters are smart. Not sure what to tell you. That made me smile a whole lot.

“Most of those kids played together in Regina Daniel (Kelly’s grandmother) Alvin Juniors’ club. The core of them had been playing together for several years and it really helped our success. Most of our practices focused on passing, defense and second serve . You don’t have to be tall or jump well to do those things and that will win games.”

After almost advancing past the third round in 1998, expectations for the Lady Jackets taking the next step entering the fall of 1999 ran high on all fronts. With a cast of eight returning players, Alvin was ranked second in the Houston Chronicle’s 5A area preseason poll. Even Garza, who cautioned her players about flashing too quickly towards  the magical trip to state, encouraged them during those early August practices to think briefly about Austin.

“I wanted them to think about state, because we already talked about it, but I didn’t want it to be the central theme,” she said. “I just had a special feeling about this group. That made me scout other teams more and work harder than I ever worked before, looking at tendencies and details I haven’t paid much attention to before.”

While Alvin certainly didn’t have the luxury of sneaking up on anybody, they didn’t have to with one floor blow after another providing ample explanation.

The Lady Jackets rolled through District 24-5A with their first unbeaten league record (14-0) since 1989 and after receiving a first-round playoff bye, easily dispatched Stratford in the area round 15-1, 15-5 with Turner holding service 14 straight times in the opening game.

District rival Clear Creek followed by almost taking Alvin to a third game in the  regional quarterfinals, but Smith fueled a second game comeback, which helped Alvin prevail by 15-12 and 16-14 scores.

The victory over Creek then set the stage for probably one of the most incredible regional tournament tickets a high school volleyball fan ever could image at San Jacinto Central College a few days later.

Both high school and college volleyball also played with different guidelines back in those times. Matches only went to the best-of-three format and scoring just  occurred during a team’s service.

Alvin and Elkins went toe-to-toe with each other in the regional semifinals with the Lady Knights taking the first set by a 15-9 count, while the Lady Jackets evened things by a 15-12 margin in the second set.

The Lady Knights appeared to be on their way to pulling the upset with a 14-12 lead in the third and deciding game. Bullion managed to save match point, though, by somehow flicking a ball headed for the net and dumping it to Smith, whose shot spilt the Elkins’ defense to make it 14-13. Two more Smith kills gave Alvin the upper hand for good at 15-14 and Bullion coaxed an Elkins’ hitting error for a 16-14 Lady Jacket victory.

“Melissa definitely saved us,” Garza said. “She stole it (the ball) from the arms of the Elkins blocker and got it to Caley. It was a great play to be sure and the most important one for us.”

The saves just got bigger and bigger for Alvin the next afternoon in the regional finals against Deer Park (who had eliminated the Lady Jackets from the playoffs the year before).

The Lady Jackets overcame a 11-4 deficit in the first game with a 10-0 run and after the Lady Deer won the second game at 15-9, Deer Park seemed to have Alvin on the ropes again in the third set with an early 9-4 lead.

Goodson and Smith led the comeback, though, with a combined 17 kills in the set, though, while Alvin and DP combined for a staggering 15 consecutive sideouts and the Lady Jackets also broke the Lady Deer’s service 13 straight times.

After Goodson broke another DP serve, Smith and Meyer crushed back-to-back baseline winners to make it 12-9. Another six sideouts ensued before another Lady Deer miscue amd Smith’s kill placed the issue at match point. Scott’s service then coaxed Deer Park’s Kellie Martin to hit the ball into the net to send Alvin to state for the first time ever.

“We worked on the sideout drill every day in practice,” Goodson said following the match. “We just learned to never give up and know if we kept working, things will eventually fall our way.”

With the exception of semifinal defeats to San Antonio Clark (1999) and Cy Falls 2000), things fell Alvin’s way for the most part. Despite the dramatic finishes dropping off a bit in 2000, the Lady Jackets still utilized them when needed.

Goodson joined Bullion and Scott with graduation departures for Garza in 2000. However, the Lady Jackets failed to miss a beat, going a perfect 14-0 to win the 24-5A title again and steam rolling Stratford by 15-7 and 15-3 scores in the area playoffs with Meyer, Smith and Wilson combining for 20 kills, while Kelly dished out 30 assists in a 15-11, 15-9 regional quarterfinal triumph over Kingwood.

“We weren’t as easy to scout in 2000 (compared to the previous year),” Garza said. “We had so many girls to go to, that it was hard to account for that big of a number.”

Clements found out about the overwhelming numbers Alvin brought to the table in the regional semifinals by a 15-8, 15-7 count with Smith drilling 13 kills and Meyer and Burkhalter combining for 16 spikes.

Following up on the region semi classic  the year before with Elkins, the Lady Jackets met the Lady Knights a round later in the 2000 regional finals. While Elkins held early edges of 6-2 and 9-4 in the two games, Alvin’s comeback magic ultimately caught their Fort Bend foe by storm for the second straight year.

Turner combined with Smith, Kelly and Wilson to spark a 12-2 run  and 15-10 first game triumph, while Alvin pulled within 10-9 in the second game and took charge from there. After Kelly’s ace was followed by Burkhalter’s go-ahead smash to give Alvin a 11-10 lead, two Elkins’ errors and Turner’s left baseline winner placed it at match point.

The Lady Knights then returned Meyer’s serve out of bounds a little later to give Alvin a 15-10, 15-10 straight set victory and its second straight region title.

“We were playing a little timid, but coach Garza told us to stay calm and keep our cool,” Smith said. “I don’t know if we got overconfident, but it never felt like we were losing.

“We just regrouped and played our hearts out.”

Such hearts pumped out back-to-back 40-win seasons, a record for Alvin volleyball which still stands today.