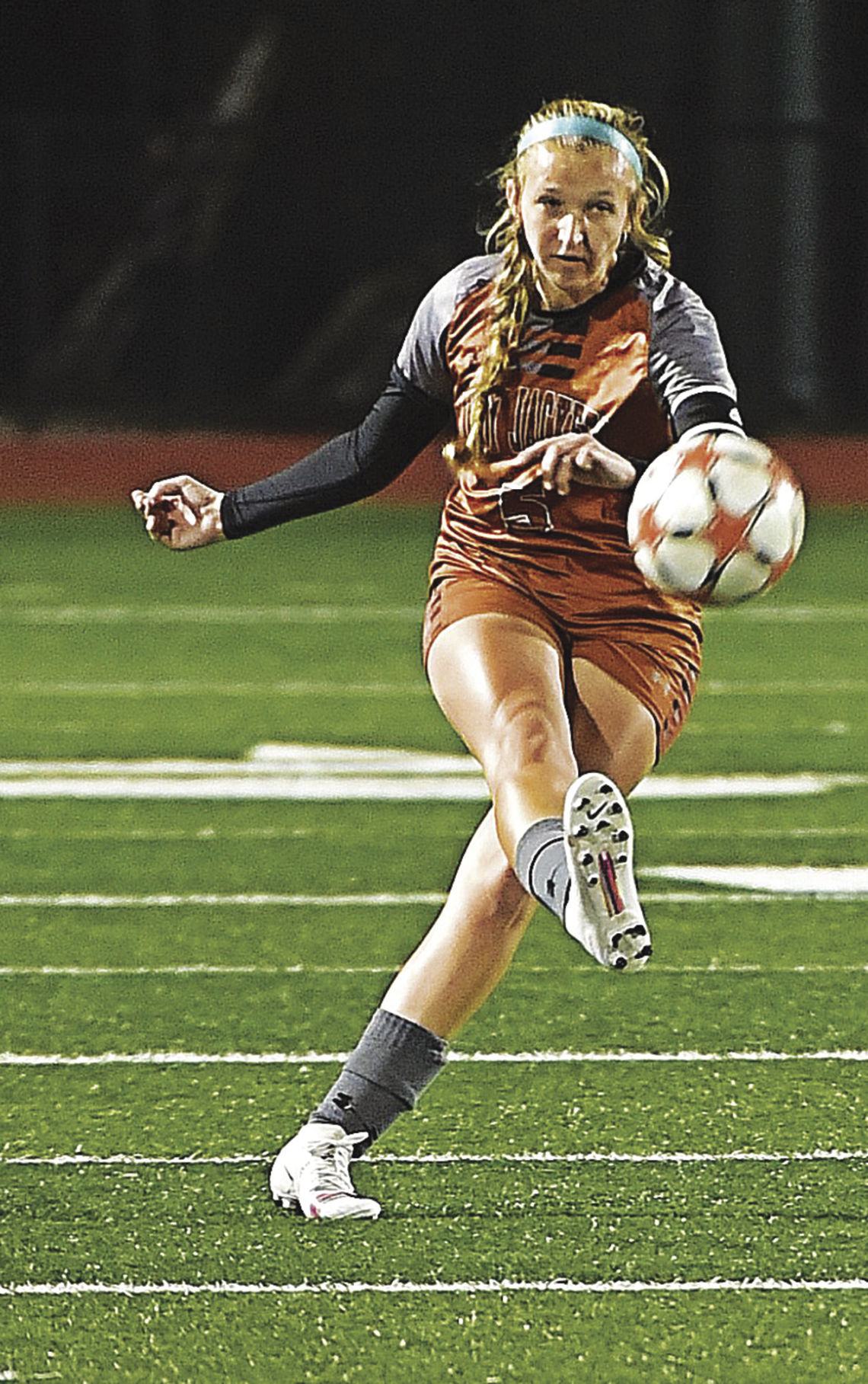 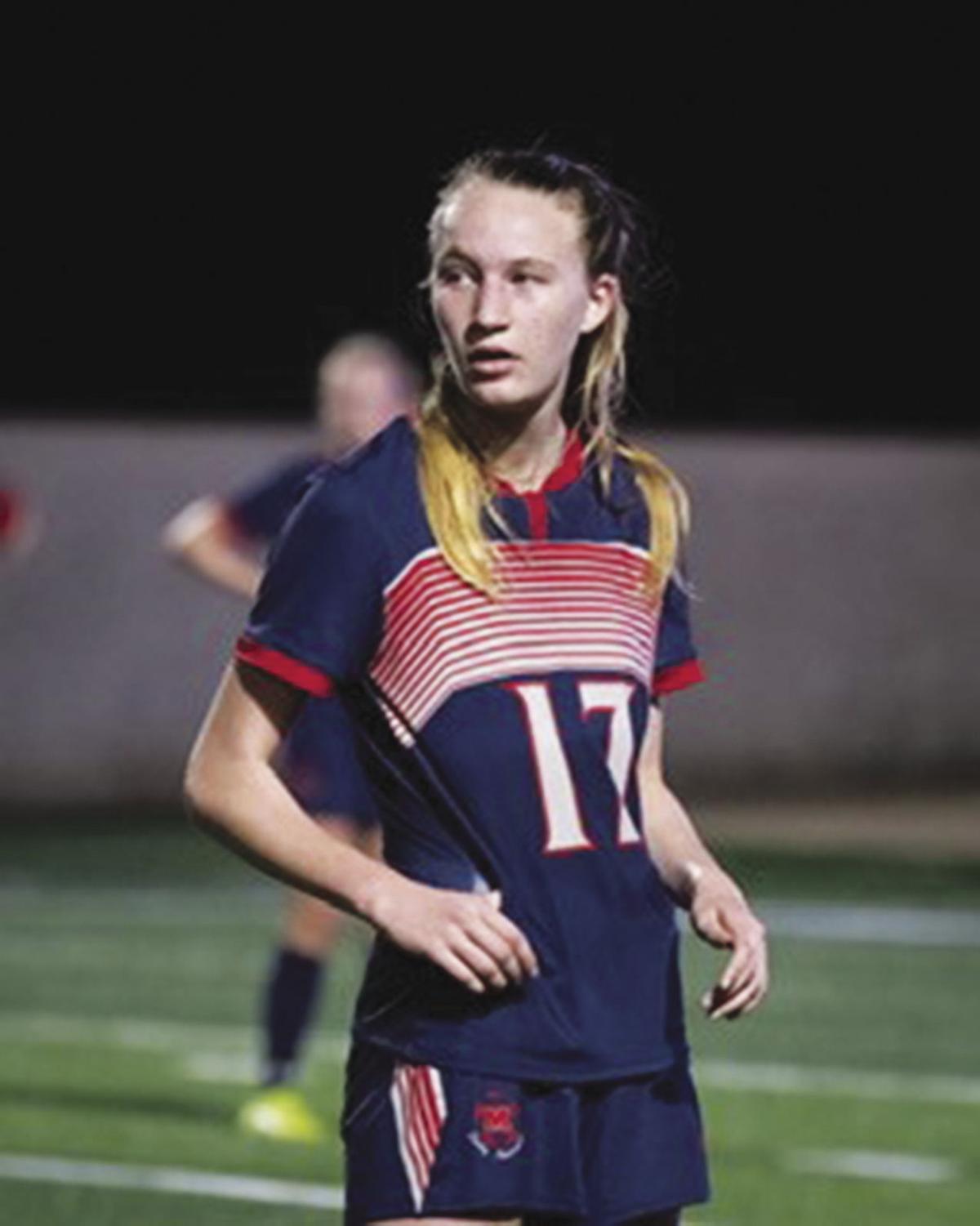 The three varsity girls’ soccer programs from Alvin ISD landed a combined 34 players on their respective all-district 24-5A and 24-6A squads.

Each school also gained a pair of selections in the individuals award categories.

Emily McCoy earned utility player of the year and Anna Wilson shared newcomer of the year honors in 24-6A for the Alvin Lady Yellowjackets, while Manvel’s Zoe Grimes was named defensive player of the year in 24-5A and the midfielder award went to Lady Maverick Caitlin Roach. Making 60 saves during the regular season, Shadow Creek’s Olivia Brown was tabbed as the top goalkeeper in 24-5A and Lady Shark Maiya Singleton received the district’s newcomer accolade.

Stephanie Elmore joined Lady Shark teammates Teresa Sandoval and Jaelyn Scott on the 24-5A second team for Shadow Creek. Victoria Coronado and Stephanie Hernandez made the second team cut in 24-6A for Alvin and the second team picks for Manvel in 24-5A included Nancy Garcia, MacAlah Hong, Drew Phillips and Emma Vanberschot.

The Lady Mavericks earned the third place playoff seed in 24-5A with a 10-4 league mark, while the Lady Sharks finished as the fourth seed at 10-6 before their seasons were cut short by Covid-19.

The area coaches reflected on their seasons and their players affected by the unprecedented event.

Manvel’s Scott Wilson - Question: Talk about your season and what made it special?

Wilson: “Our season was going really well, we had already clinched a playoff spot for the fourth straight year. We were going in as the third seed out of our district. This year was pretty special due to losing three first teamers, who graduated last year and they were vital for over half our goals last season. Fortunately, I had eight freshmen who came in and made the varsity team. Those freshmen that came in rotated in and out of the starting line-up all year, but their contributions were massive. I returned all of my defenders (Emma Vanberschot (captain), Tori Reid (Captain), Macalah Hong, who earned the starting job late last season, and Zoe Grimes (co-defender of the year) who returned from a non soccer injury who missed all of last season but was able to returns in the playoffs, and goalkeeper Claudia Solis.

“My midfield returners were Hillary Griffin (captain) and Nancy Garcia (senior). We had a huge hole to fill with Toni Reid and Alexia Salazar graduating. This role was filled by Midfielder of the Year Caitlin Roach (freshman) and a collection of Olivia Bibbins (Junior) and Allison McClanahan (freshman), who both came up big for us all season due to the fact we were switching from  a 4-4-2 to 4-3-3 throughout the year, Olivia’s speed allowed me to switch to a 4-3-3 with her and Hillary on the wings up top.

“We had one returning forward from last year Lizbeth Granados who returned. Drew Phillips (freshman) who came in from Volleyball and Landry Wisnoski (freshmen) who splits her time from competitive dance stepped up in big ways as forwards this year.

But what was really so special about this year was the number of players who could come off the bench and contribute at a high level. Ava McFadden (freshman), who also came from volleyball was usually my first defender off the bench, Madeline Fuentes (junior) who I could plug into a number of positions on the field depending on injuries that happened. Nicole Sanow (junior) was also a utility player that scored some goals for us off the bench and played defense when we had players out.

“It was nice to have a back-up goalkeeper in Sidney Blackmar (freshmen) who got a lot of experience this year, as well as midfielder Isabella Hernandez (freshmen) who got some quality minutes during the season. We also had a surprise pick me up from a transfer Reilly Joseph from Hightower who played varsity basketball for Manvel, she only got to play in a few games but was getting her soccer legs under her and was going to make a huge contribution to our playoff run.  Unfortunately, one of my seniors tore her ACL and was unable to step on the field this year Lupita Fernandez. This was a big loss to us, but she contributed off the field all season for the team.”

Wilson: “his year’s seniors were Tori Reid - Captain, and Nancy Garcia. Lupita was not able to play due to a torn ACL. Tori and Nancy both lettered their freshmen year. They are the first seniors to advance to the playoffs their whole high school career at Manvel High School.  This was special to both of them, that they were there at the beginning of the turnaround with Manvel Lady Mavericks’ soccer. Even though they did not get to play a playoff game this year, they knew that we had already clinched a spot and was looking forward to trying to make a run this year. Tori is headed off to Texas State University to study engineering (not playing) and Nancy Garcia (not playing) is planning on going to UTMB to study nursing. Lupita Fernandez is attending University of Texas at San Antonio and plans to study Psychology.”

Shadow Creek’s Nikolaus Kinzie - Question: Talk about your season and what made it special?

Kinzie: “This season was incredibly special for me as a coach and for the players because it marked the end of a journey with the first freshman class at Shadow Creek High School. From the very first day of the season, back in November, we knew that our work would define how the program moves forward. Our very first tournament in Palestine TX on the first weekend of January forced us immediately to deal with adversity. Our program’s leading goal scorer suffered an injury which would remove her from the majority of our season. Within two more games we lost two more varsity athletes to injury.

“While not the start that we had envisioned for ourselves, as a team we agreed that we would not let these setbacks define what our season and our story would become. From that point on, our success would be measured every single day, with every kick of the ball, every piece of video watched, every mile run, every weight room session, and every classroom session. Accountability to each other became our currency, hard work and determination became the investment, and a postseason to honor our journey as the payoff. We fielded an incredibly youthful team with two freshman starters, one of which was voted as the “newcomer of the year” by the coaches of district 24-5A, our team’s leading goalscorer for the season. As a team we promote a watchword that is included on the back of our jerseys, “Together Always, Together Win” (TATW).

“Throughout the season we embodied that watchword with massive contributions from everyone on the team. Players stepped in to new and unfamiliar roles in order to help the team reach its final destination. We achieved our goal with two games left in the season, just as spring break was set to begin. Little did we know how our lives would be changed after that. I have been amazed at how determined these girls have remained through it all. They have stood by each other and maintained constant communication with each other and with the coaches. They sent videos of working out and practicing their soccer skills. I couldn’t be more proud of all they accomplished.”

Kinzie: “In terms of our senior class, they have overcome so many challenges through the years. Two of my seniors have been four-year lettermen, starters for the very first varsity game that we ever played. The majority of the rest came on in our second varsity season. They are a special group.

“My first instruction to them was to define what it means to be a Shark, not with words, but with actions every day. I instructed them to leave behind a legacy that every young junior high girl would want to follow. They have no doubt accomplished this as we have matured. In our first season, no one expected us to win a single game, we won five and tied two. In our third season we made our first playoff appearance and won the very first playoff game in our program’s history. This group of seniors has put our program on the map. The same two girls, who are four-year lettermen have become the first athletes in our program’s history to be accepted as athletes at the collegiate level. I am so proud of this group and I look forward to all that they will accomplish beyond the field.”