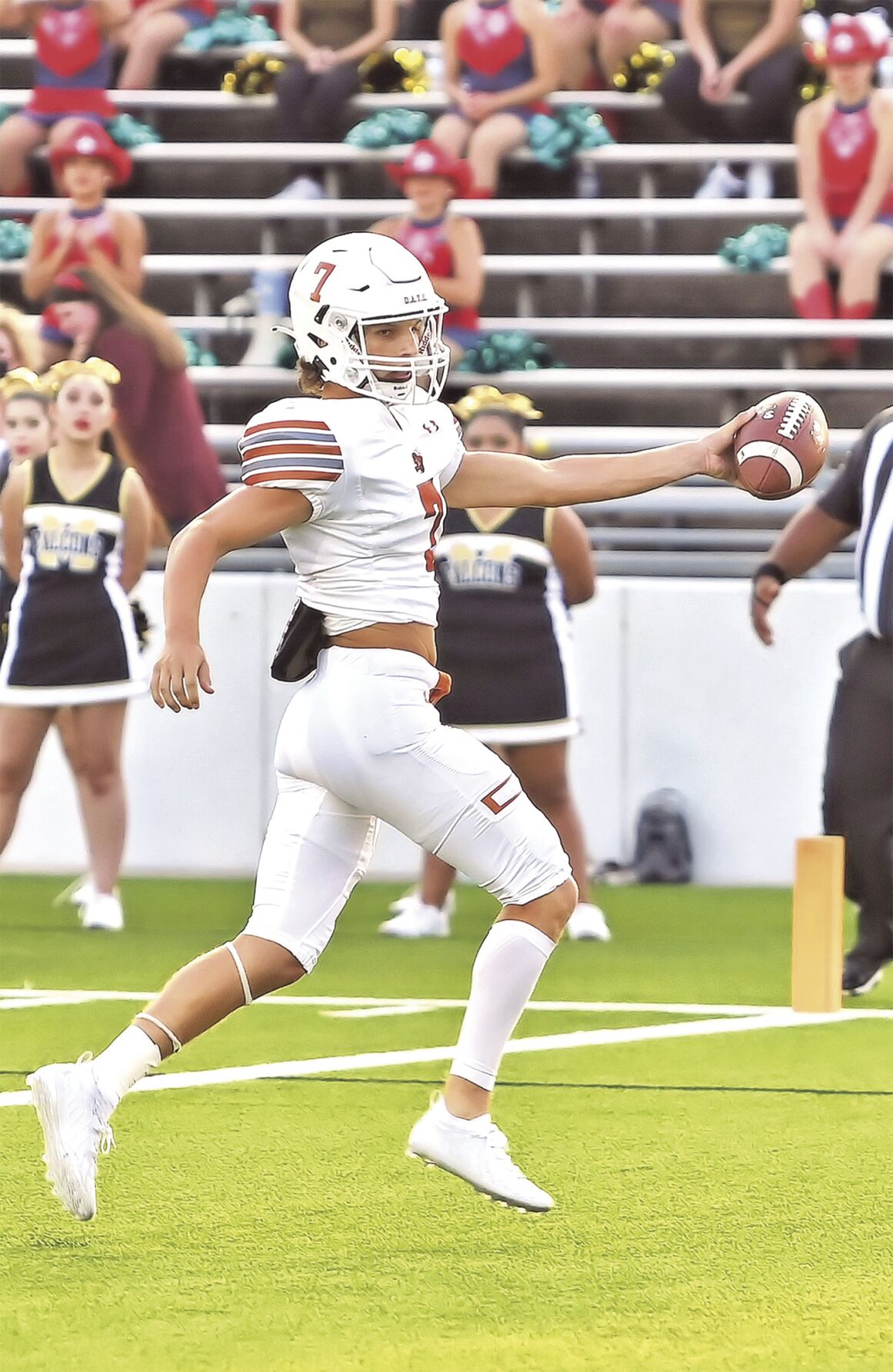 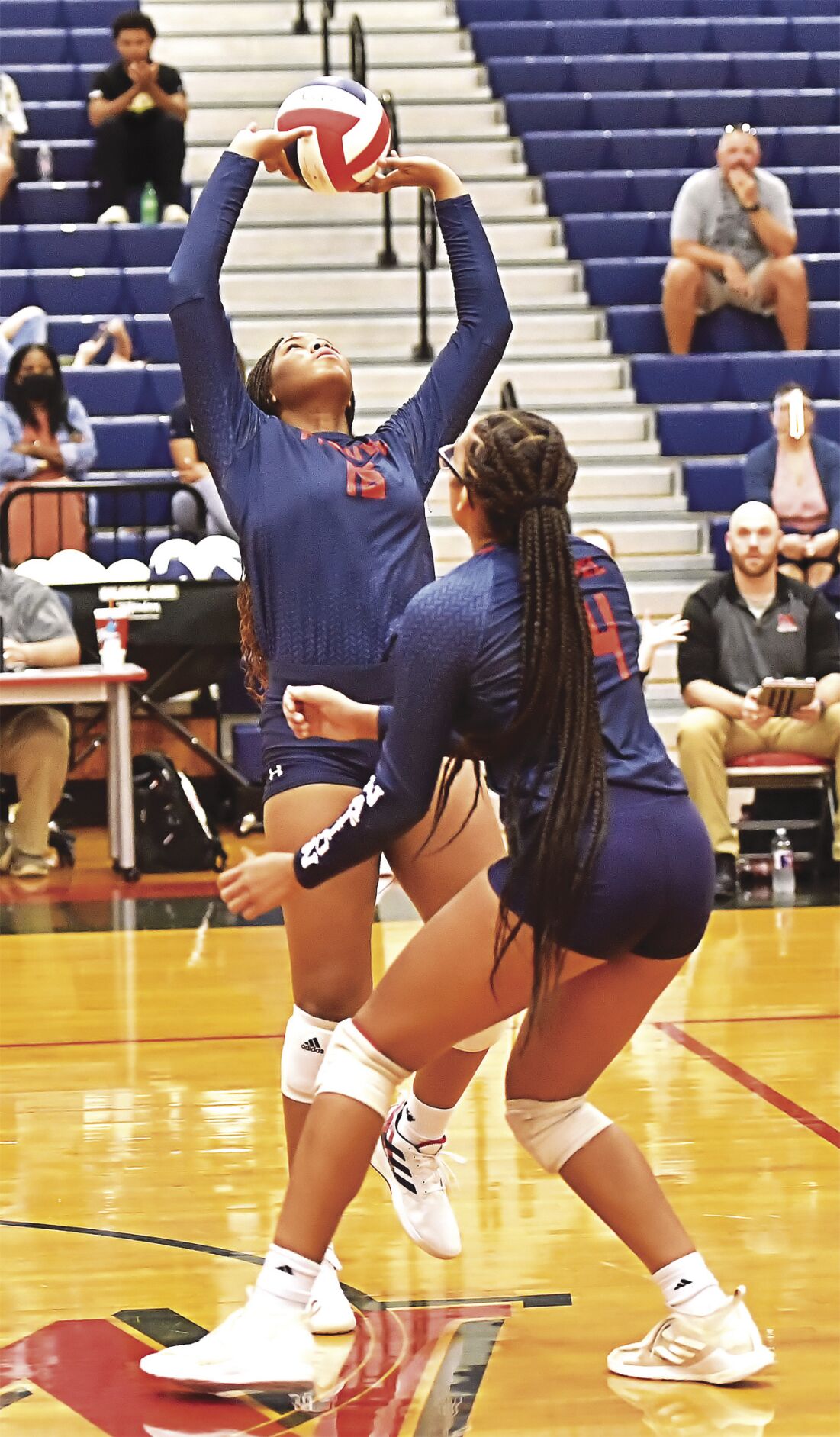 The setting of freshman Kennedy Massie (16) and the blocking of Mary Kate Preston (14) were among the many reasons the Region III Champion Manvel Lady Mavericks advanced to the 5A state volleyball semifinals for the first time in school history. 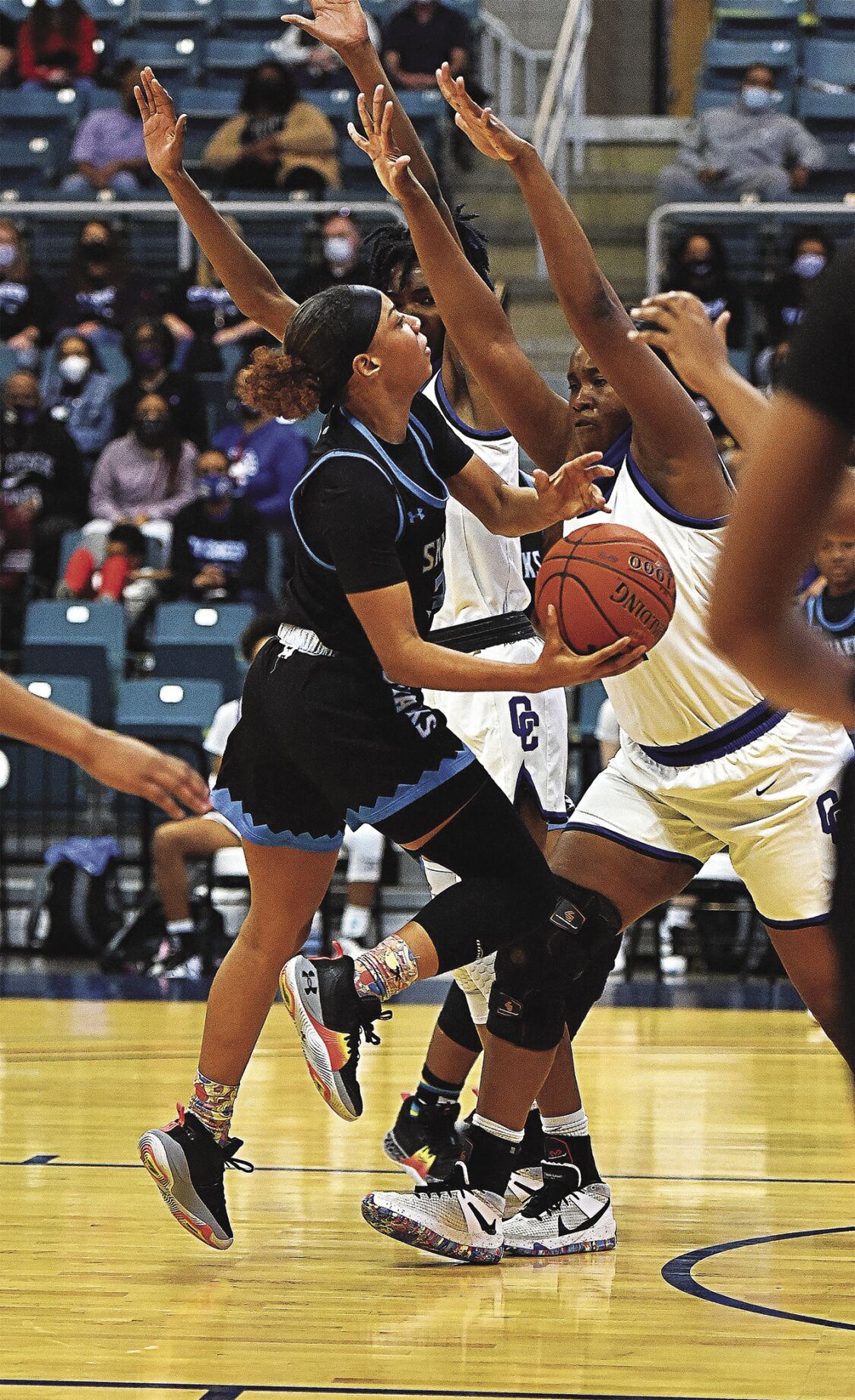 The Shadow Creek Lady Sharks and guard R`Mani Taylor enjoyed their best season ever by advancing to the Region III Girls' Basketball Finals.

The setting of freshman Kennedy Massie (16) and the blocking of Mary Kate Preston (14) were among the many reasons the Region III Champion Manvel Lady Mavericks advanced to the 5A state volleyball semifinals for the first time in school history.

The Shadow Creek Lady Sharks and guard R`Mani Taylor enjoyed their best season ever by advancing to the Region III Girls' Basketball Finals.

2021 marked the return of the spring sports seasons for Alvin ISD area high schools after Covid-19 forced the shutdown the year before.

The year began with Manvel and Shadow Creek being among the many gridiron squads around the state to compete in playoff action during the month of January for the first time ever. This came about due to the UIL not starting the season for 5A and 6A teams until September due to Covid.

The following is a look back at the area sports year in review.

McCorkle’s Alvin teams advanced to postseason five times during his six-year tenure with only the covid pandemic blocking the path in 2020, as did it for all high school programs in Texas and around the country.

The Lewisville native and Hardin Simmons graduate came to Alvin in 2019 after holding both the head football coaching and athletic director posts at S&S Consolidated High School in Grayson County. Gage guided the S&S program to three playoff appearances in four seasons. He also coached for five seasons at Barbers Hill High School, the last two at as Hill’s OC.

Against Angleton in the area round, a quick outburst in the second half proved to be the difference in the Lady Mavs’ 2-1 come-from-behind triumph March 30 at AISD Freedom Field in Iowa Colony.

With the Lady Mavs entering the second half with a 1-0 deficit, Olivia Bibbins found senior Nicole Sanow with a perfect crossing pass and Sanow blasted it past the Lady Wildcats’ keeper for a 1-1 stalemate. Bibbins managed to deliver the pass despite going to the ground following a collision with the Angleton defender.

“I decided to swap Hillary with Olivia on that first goal, because Olivia has the speed and the ability to cross from the right side,” Wilson said.

Hillary Griffin hammered the go-ahead goal into the net at the 53-minute mark and while Lady Mavs’ keeper Claudia Solis was forced to leave the contest after colliding with an Angleton player, sophomore goalie Sidney Blackmar combined with the Manvel defense to keep the Lady Wildcats at bay the rest of the way.

Shadow Creek Basketball girls compete in regional finals - The 23-6A Champion Shadow Creek Lady Sharks, who went a program best ever 25-5 and advanced to the girls’ regional basketball finals for the first time in school history.

Holding a narrow 30-28 halftime lead in the regional semifinals against Tompkins, the  Lady Sharks pulled away  in the third period with Brooklyn Brown draining a pair of treys to push the Lady Sharks’ lead into double digits at 40-30. Shadow Creek took a 52-36 cushion into the final eight minutes with Bre`yon White’s three-point play and another trey by Brown putting the game out of reach.

The public was invited to the opening ceremonies and later inside the museum in small groups to view the exhibit, which included memorabilia from the Alvin Express’ legendary hall of fame career with the New York Mets, California Angels, Houston Astros and Texas Rangers, along with his prep career at Alvin High School.

After the original exhibit relocated from Alvin Community College’s Nolan Ryan Center to the Texas Sports Hall of Fame in Waco in 2016, Alvin City Council soon approved the expansion of exhibit space in the museum.

Alvin closed its season at 23-5-1 with both its first district championship and playoff appearance since 2016. Alvin won back-to-back district crowns in 2015 and 2016. The Jackets also advanced to the second round of the playoffs for the first time since 2014. Alvin swept Clear Creek in the best-of-three bi-district playoff series this time around.

The Sharks finished their best season in school history with a 24-9 mark and entered the playoffs as the second seed from 23-6A. Shadow Creek edged Clear Springs two games to one in the bi-district round, while going on to sweep Summer Creek in the area round.

Sharks’ head coach Anthony Scalise then took the same post at Alvin after being approved by the AISD Board, as former Jackets’ skipper George Banda departed for Goose Creek Memorial.

Adam Mason led the way for the second place Manvel boys, capturing a gold medal in the men’s 400 meters at 47.43 seconds and a silver in the 800 meters at 1 minute and 52.60 seconds, while teaming with Isreal Allen, Jaydon Blackshire and Darrell Anderson for another silver in the 4X400 relay at 3 minutes and 15.49 seconds.

Jalen Walthall also leaped to a gold medal in the men’s triple jump at 50 feet and four inches and the Lady Maverick foursome of Rayah Wynn, Kayla Smith, Ja`Daisia Sims and Jasir Miller provided gold as well with their time of 3 minutes and 46.91 seconds in the women’s 4X400 relay.

Sydnee Williams claimed the bronze for the Lady Mavs in the women’s 100 meter hurdles at 14.16 seconds.

Frisco Liberty won the men’s title with 54 points, followed by Manvel with 45.5 points and third place Fort Bend Marshall with 42 points. The Mavs have won state titles on the men’s side in both 2015 and 2017 between another runner-up performance in 2016.

Manvel finished tied for fourth with Hightower in the women’s team standings with 34 points. Fort Bend Marshall also tied Lancaster for the title with both teams accumulating 46 points.

The Shadow Creek girls also came away with a bronze medal in the 6A meet on Saturday. Amaya Kennison-Jenkins teamed with Nia Parks, Aleia Peters and Sydney Bryant for a 1:37.91 time in the 4X200.

Horsfall told the Sun and Advertiser that the Polemiou is part of the CVF’s second division.

“A big reason why they wanted me to come and play for them is that they want to move back into the first division,” said Horsfall, who signed with Polemiou, Oct. 25 and moved overseas to Paphos, Cyprus. This is the first time in years they have picked up a foreign player. I have never been more excited  to begin my career and hopefully I continue to play in higher leagues in different countries.”

Horsfall delivered a banner career at both the high school and collegiate level. At Alvin, She was the all-time career digs leader and was named to PrepVolleyball.com Class of 2016 Senior Aces: Top 100 Complete list. Horsfall was selected to the all-district first team four times as an outside hitter and earned all-state honors on three occasions.

Manvel Volleyball makes history with state tournament berth - Despite enduring just their second three-game sweep all season to Lucas Lovejoy in the state semfinals in November, the Manvel Lady Mavericks provided many memorable highlights in becoming the first ever Manvel Volleyball team to advance to the state tourney, going an impressive 37-12 overall.

While facing three match points in the region finals against College Station in the fourth set, starting with a 24-21 deficit, the Lady Mavs fought back behind a pair of Preston blocks to spark the comeback and take the match to a fifth and deciding game.

College Station pulled within 12-11 on a Ana De La Garza kill, but the Lady Cougars immediately committed a hitting error and were unable to get any closer. Preston followed with her 14th stuff at the net and after another De La Garza kill, Jordan hammered a baseline winner to capture the region crown for Manvel and also send them to state.

Garza hired as inaugural head football at Iowa Colony - Alvin ISD unanimously approved Raymond Garza as the new head football coach for the soon to be opened Iowa Colony High School during its regular board meeting in December at the Liberty Alumni Hall complex in Iowa Colony.

Garza, 38, will be taking over a Pioneers’ program, which will compete in Class 4A Division I next fall. The hiring not only gives the Texas A&M and Lamar University graduate ties to all four gridiron programs in AISD, it also marks the third school  in the district he will coaching in its inaugural varsity season.

Garza graduated from Alvin High School in 2001 after playing at the tight end spot for former Yellowjackets’ head coach and current AISD athletic director Mike Bass and position coach Kirk Martin. Garza’s return to AISD as a coach included a stint at Harby Junior High, followed by joining both Martin’s staff as an assistant at Manvel High School in 2008 and Butler’s staff at Shadow Creek High School in 2016.