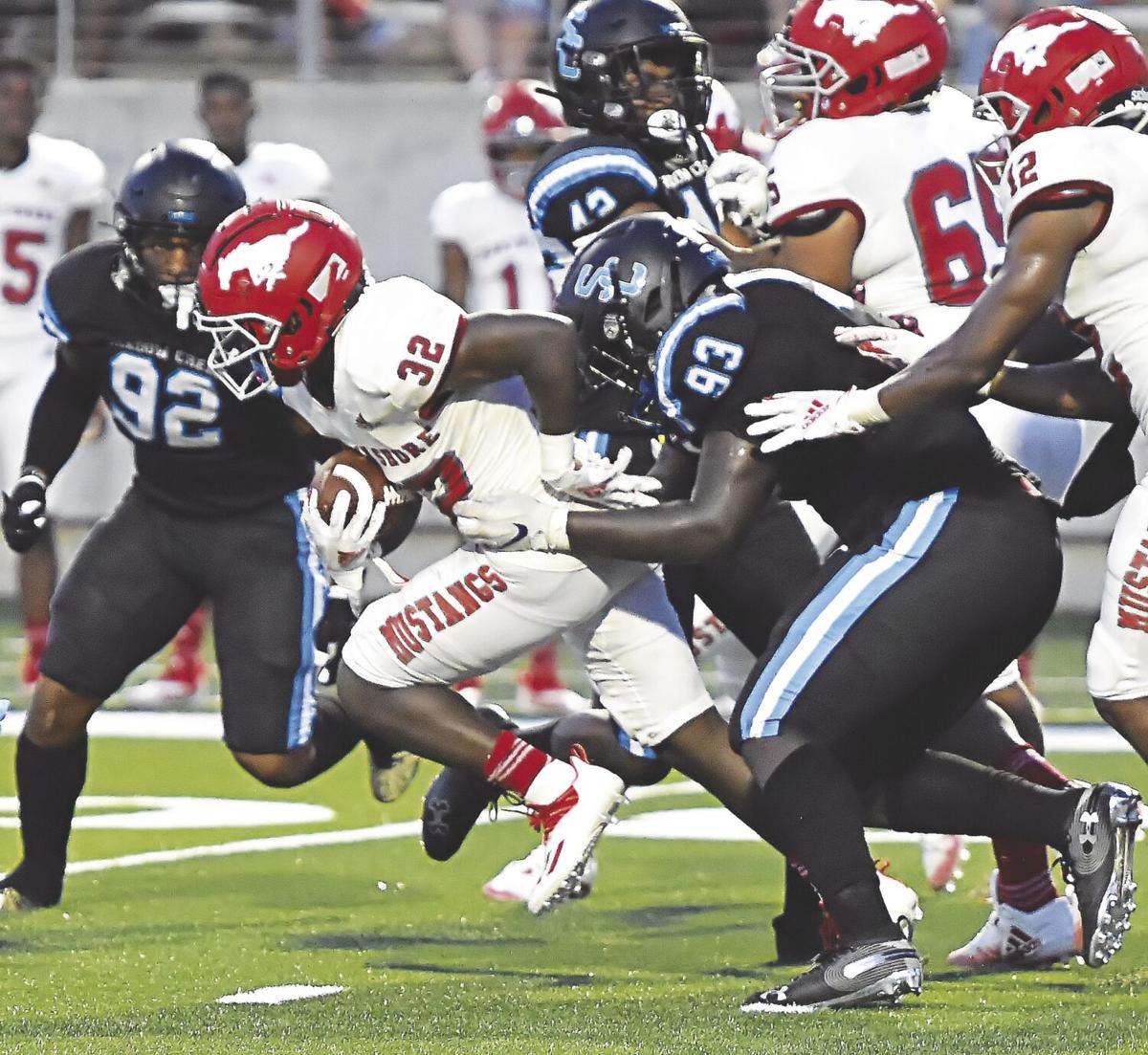 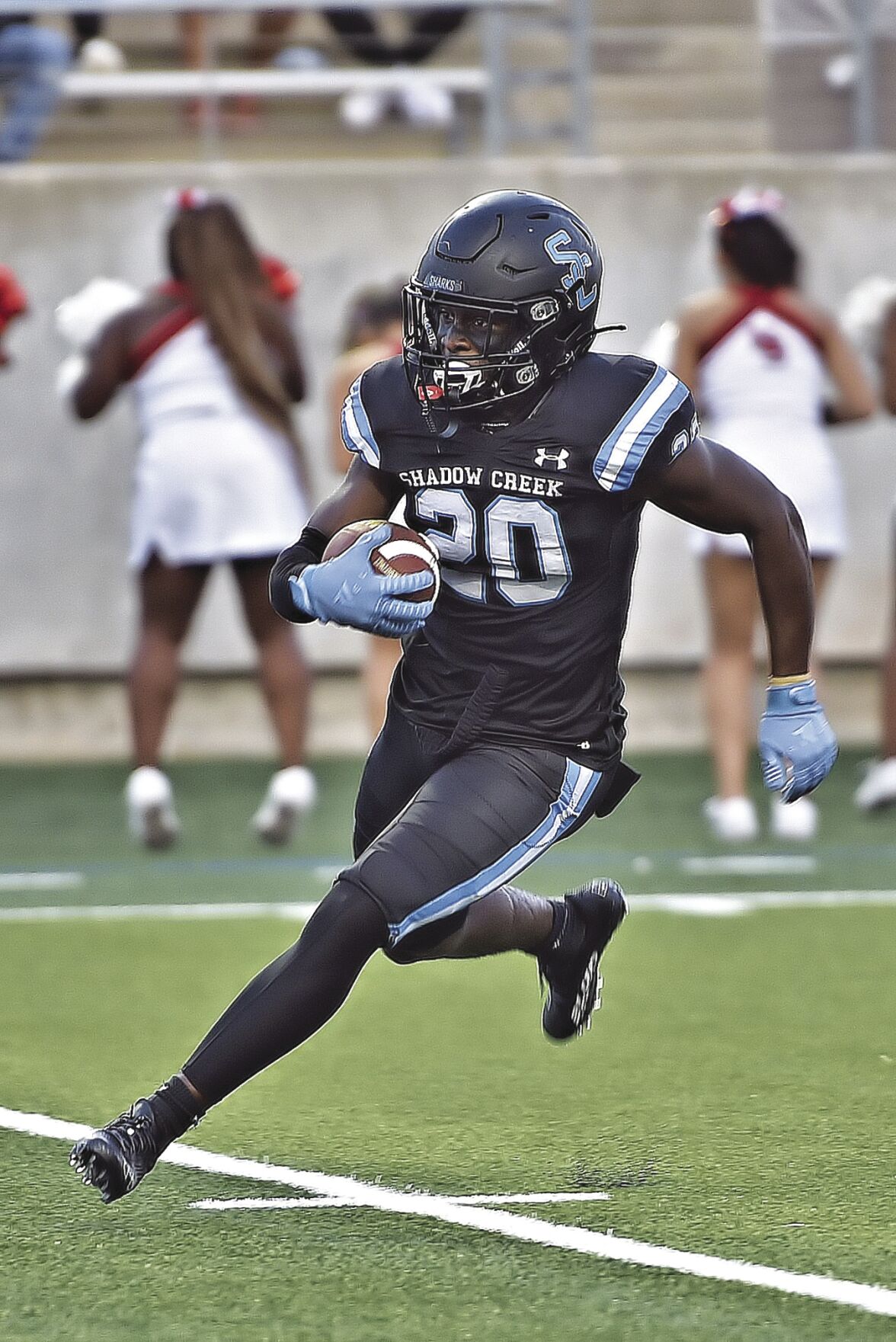 Sharks' defensive back Dejuan Lewis (20) delivered a solid performance on special teams with a 20.8 yard average on kickoff and punt returns and the senior also intercepted a North Shore pass in the end zone during Friday's opener.

Sharks' defensive back Dejuan Lewis (20) delivered a solid performance on special teams with a 20.8 yard average on kickoff and punt returns and the senior also intercepted a North Shore pass in the end zone during Friday's opener.

IOWA COLONY - While losing a ton of  offensive starters from their state semifinalist squad from a year ago, the North Shore Mustangs showed they still have plenty of playmakers on the defensive side of the ball to make up the difference.

The Mustangs took advantage of five Shadow Creek turnovers, converting four of them into scores, enroute to a 33-10 triumph in the football season opener for both teams Friday night at AISD Freedom Field.

The Sharks, who endured their own heavy graduation losses at 32 during the offseason, joined the Mustangs in struggling early on offense. The teams traded a pair of punts to open the contest.

However, North Shore cornerback Jayven Anderson stepped in front of a Duke Butler pass on Shadow Creek’s third possession and returned the interception 57 yards for a touchdown with 4:27 remaining in the first quarter. Andres Montes added the PAT for a 7-0 Mustangs’ lead.

The Sharks appeared ready to cash in on a turnover break of their own during the second period with Chineme Anyalbechi recovering a Xavier Owens’ fumble at the North Shore 48-yard line. However, Shadow Creek returned the fumble favor on the next play and Wyndell Mitchell found a wide open Jhalyn Bailey from 15 yards out three plays later to increase the margin to 14-0 with 8:53 left.

Shadow Creek finally got going on their next series. Butler hooked up with Jo`Qwan West, who made a beautiful 32-yard leaping reception  near midfield and after Butler scrambled for 11 yards, the junior signal caller hit Lawrence Armstrong perfectly in stride with a 43-yard TD toss to cut the margin in half at 14-7.

Javin Logan picked off another errant Shark fling a few minutes later, though,  and Rashaad Johnson’s one-yard run regained the two-TD cushion for North Shore at 21-7 at intermission.

Following a botched Mustangs’ punt snap, Matt Allison converted the miscue into a 37-yard field goal to pull the Sharks within 21-10 with eight minutes left in the third.

Shadow Creek would get no closer, though.

Jacoby Davis dashed 45 yards with an interception scoring return for North Shore and Damon Ford chipped in a three-yard run to cap the scoring.

Shadow Creek next plays Bridgeland Sept. 4 at FCU Stadium in Cypress at 6 p.m.

Dickinson 45 Manvel 42 - The Mavericks dropped a season-opening heartbreaker Friday at Sam Vitanza Stadium in Dickinson, as Luke Martin hit Layton Paul with a 17-yard TD pass for the winning tallies with 1:47 remaining in the contest.

The wild affair featured seven lead changes with Manvel twice holding 10-point leads at 16-6 and 23-13 in the first half.

However, the Gators erupted for 14 unanswered points from the latter deficit with Kaleb Walker racing 70 yards with a blocked field goal return to put Dickinson in front at 27-23 at the break. The Gators also returned a blocked Manvel PAT for two points in the third quarter.

De`Monte Seymour collected TD runs of 4, 16 and 8 yards for the Mavs in the second half. The latter score gave Manvel a 42-38 lead with 4:23 left in the contest.

After Martin combined with Paul for the go-ahead TD, the Mavs moved into field goal range, but missed a 24-yard attempt in the closing moments.

Kaeden Smith (15 of 21 for 211 yards, 1 TD) hit Bryton Menifee with a 13-yard TD toss to give Manvel a 7-0 lead in the opening period. After a bad punt snap from the Gators gave the Mavs a safety, Seymour (10 yards) and Ty Harris (31 yards) both collected scoring runs for Manvel.

Seymour paced the Mavs on the ground with 152 yards on 22 carries and four TD’s, while Harris 74 yards on 15 carries and one TD.

The Mavs next host Crosby in their home opener Sept. 3 at AISD Freedom Field at 7 p.m.