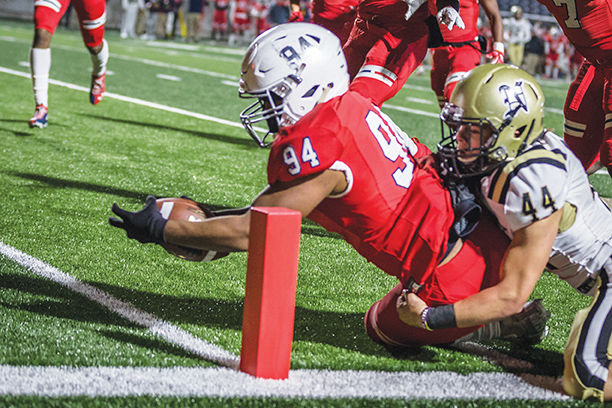 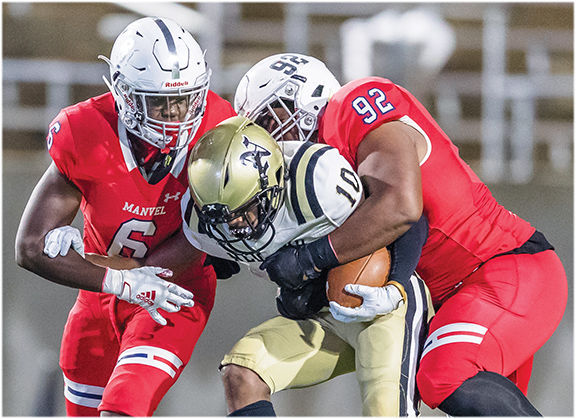 Following a breakout performance in Thursday’s Class 5A Bi-District Division II football playoff, though, Donovan Eaglin probably moved up more than a few places on every defensive coordinator’s priority chart for the rest of the Mavericks’ postseason run.

The 6-0, 215-pound senior running back rushed for 181 yards and four touchdowns to lead Manvel to a convincing 49-14 triumph over Nederland at AISD’s Freedom Field.

“Donovan is a warrior and he does it with his mouth shut,” said Hall, whose team now plays Lamar Consolidated or Lindale in the second round later this week. “He doesn’t holler and he doesn’t point fingers. He gets out there, puts the ball in his hands and runs real fast and real powerful.

Eaglin’s last two touchdown romps in the second half also sealed a contest, which had seen the Bulldogs cut a 28-0 margin in half to 28-14 at intermission.

“I give all my glory to God first and then my offensive line,” Eaglin said. “All of them did their thing and without them, I wouldn’t have been able to get any of those yards.

“Getting the rushing game going and then the passing game tonight was a big key for us.”

Count a stiff breeze paving the way for the Mavs (11-0) having to only travel 30 and 39 yards for their first two scores in the opening period following back-to-back short punts by the Bulldogs’ Cale Baker.

Eaglin converted the first short field for Manvel into a three-yard run with 4:52 left, while Jalen Paxton broke free after collecting a pass from quarterback Tucker Yarborough and delivered a 39-yard catch-and-run reception to make it 14-0 with 2:47 still remaining in the first.

After forcing another Nederland punt, the Mavs took the long route in the second quarter, marching 55 yards in 11 plays.

Jalen Walthall collected a clutch 14-yard reception from Yarborough (13 of 15 for 151 yards, two TD’s) on third down and Eaglin went in from two yards out three plays later.

Luis Moreno booted the extra point through the uprights with 8:27 left in the second to increase Manvel’s lead to 21-0.

The Mavs’ defense rose up to sack Bulldogs’ signal caller Bryce McMorris on third down to force another punt and Yarborough and Walthall immediately took advantage with the pair combining on a 50-yard TD bomb to make it a four-score cushion at 28-0 midway in the period.

Nederland finally got on the board on McMorris’ nine-yard keeper, while the Bulldogs then converted a 28-yard interception return by Kerrington Broussard into Josh Mazyck’s six-yard run to trim the margin to 28-14 at the break.

However, Eaglin exploded 65 yards to the end zone on Manvel’s opening possession in the third quarter and the Mavs never looked back.

The Bulldogs were also unable to cash in on a pair of scoring chances.

Rene Cunningham’s 73-yard TD fling to Baker was wiped out when officials ruled that McMorris’ initial toss to Cunningham was a forward pass. The Mavs then held Nederland on downs at the MHS 20-yard line