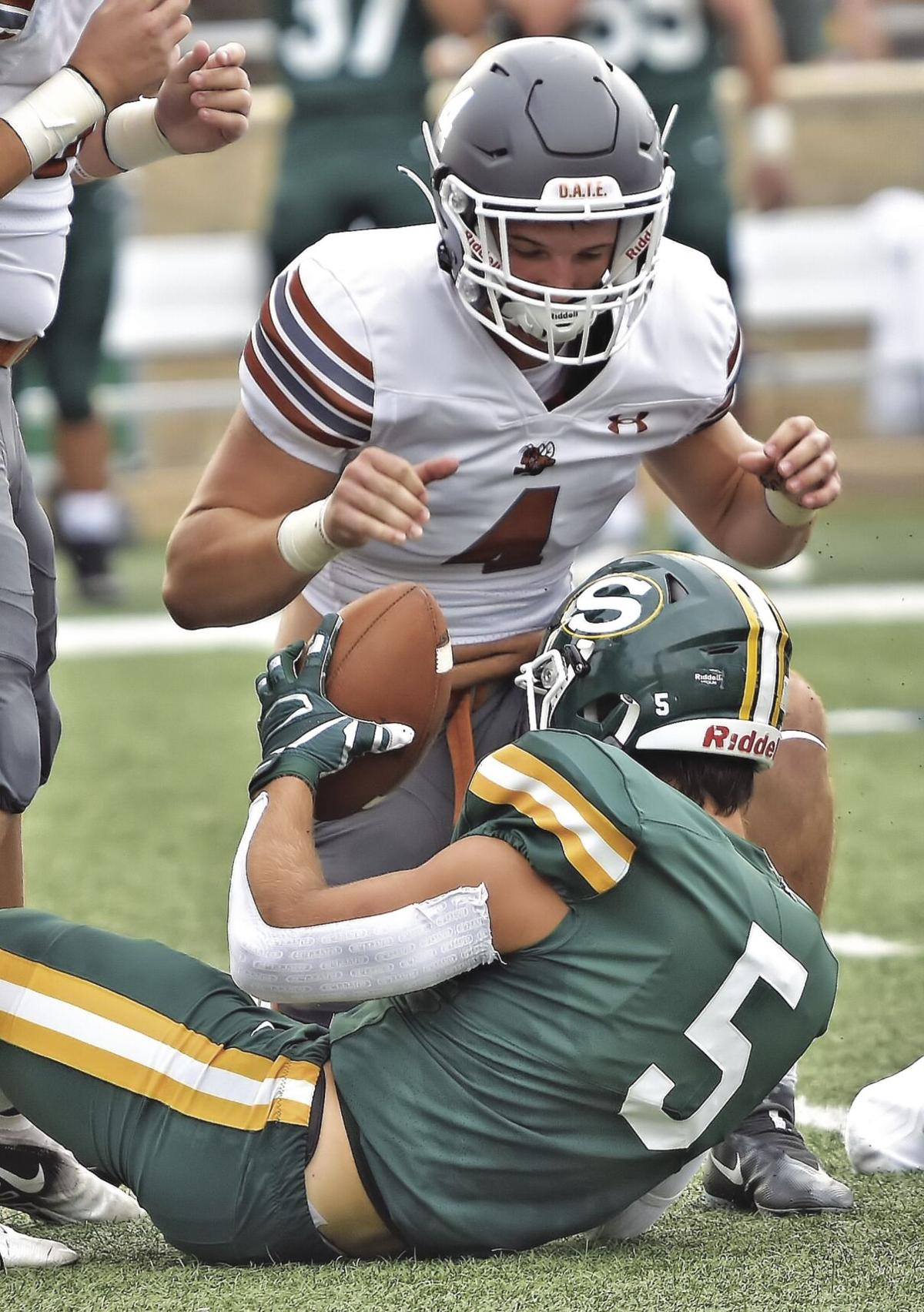 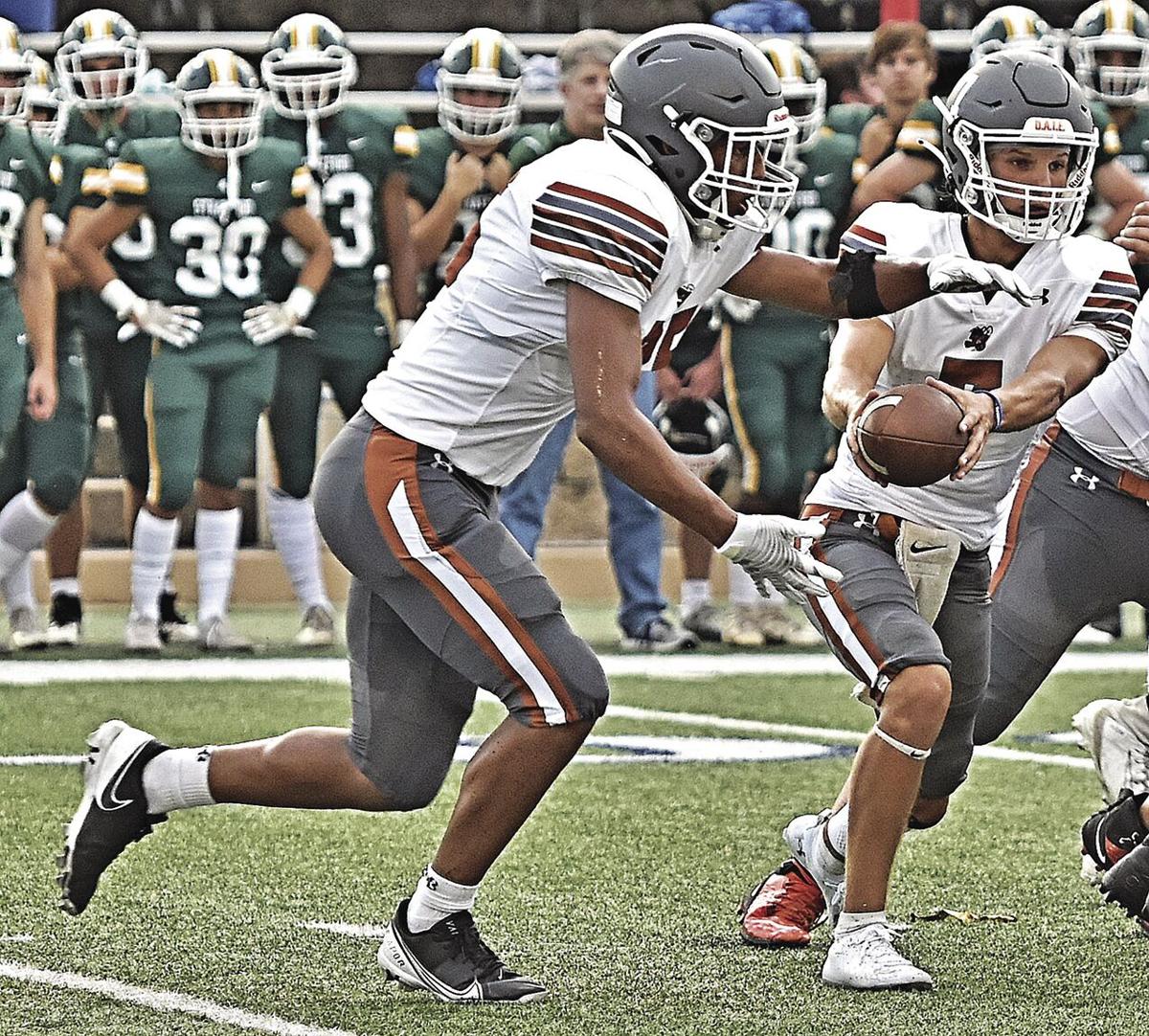 Jackets' quarterback Trevor Bockel (7) hands the ball off to running back Deyshawn Peterson (35) during Thursday's season opener against Stratford in Houston. Peterson paced the Alvin ground game with 69 yards on 12 carries and one TD.

Jackets' quarterback Trevor Bockel (7) hands the ball off to running back Deyshawn Peterson (35) during Thursday's season opener against Stratford in Houston. Peterson paced the Alvin ground game with 69 yards on 12 carries and one TD.

HOUSTON - Nash Rankin passed for 176 yards and two touchdowns and Jordan Smith added 156 yards on the ground and one score, as Stratford collected a 33-6 season opening football triumph over the Alvin Yellowjackets, Thursday night at Tully Stadium.

Alvin, who was playing its first game under new head coach James Gage, had 146 total yards and 10 first downs in the contest. The game was stopped by lightening with 3:12 remaining in the contest and not resumed.

“Going back and watching the film, number one was that our kids played hard,” Gage said. “For the most part, we played physical and that’s what we have been preaching to our kids. I talked with (Stratford) coach (Todd) Rankin after the game and we both agreed that it was an old school physical type of game.

“We’ve got to figure out how to get out of our own way. We had a lot of missed tackles last night. The blocked extra point and the dropped punt. Those are the mental mistakes we have got to get corrected, if we are going to take that next step. There were several times offensively third and three that we didn’t convert. If we can fix those things, we can be able to take that next step.

“It was almost like we were waiting around for something bad to happen instead of going out and making something good happen. That will come with time.”

The Spartans took the opening kickoff and drove 75 yards in nine plays. Rankin went in from two yards out a keeper and Giancarlo Chelala booted the extra point through the uprights for a 7-0 Stratford lead with 9:19 left in the opening period.

Behind the running of Daniel Blume, Cole Erndt and Jordan Torres, the Jackets gathered a pair of first downs, but were soon forced to punt and Caleb Reed hammered a 43-yard kick to the Spartans’ eight yard line.

While Stratford continued to move the ball effectively throughout the first half, the Alvin defense turned in a solid performance to stay within striking distance at 13-0 at intermission. The Jackets limited the Spartans to 33 and 35-yard field goals by Chelala and also delivered an impressive  goal line stand with Larry Vojacek stopping Rankin on a fourth-and-goal keeper at the two-yard line.

“That just shows you what kind of kids we have,” Gage said. “They were on the field for a lot of the first half. They were tired and gassed. They dug their heels in and held them to the field goals and the goal line stand. Those are the positives we have got to build off of.

“We have got to find ways to get off the field quicker, as well, though.”

Stratford finally begin to pull away in the third quarter with Rankin finding Jake Brand (46 yards) and Triston Williams with TD passes to increase the margin to 27-0.

The Jackets got on the board early in the fourth quarter on Dayshawn Peterson’s 10-yard run to cap a nine-play, 65-yard march. Peterson (69 yards on 12 carries, 1 TD) also had a 14-yard dash in the scoring series.

Alvin next hosts Kempner on Sept. 3 at 7 p.m. at AISD Memorial Stadium. The game will be also be the Jackets’ homecoming.

“We will have our work cut out for us, but we are going to turn the page and get ready for Kempner,” Gage said. “Coach (Darrin) Andrus does a good job over there and they have gotten after us the last couple of years.

“Homecoming should bring a big crowd and a little bit of excitement. We have an extra day with eight and hope that extra day gives our kids’ bodies a chance to recover and also give us an extra day of preparation.”