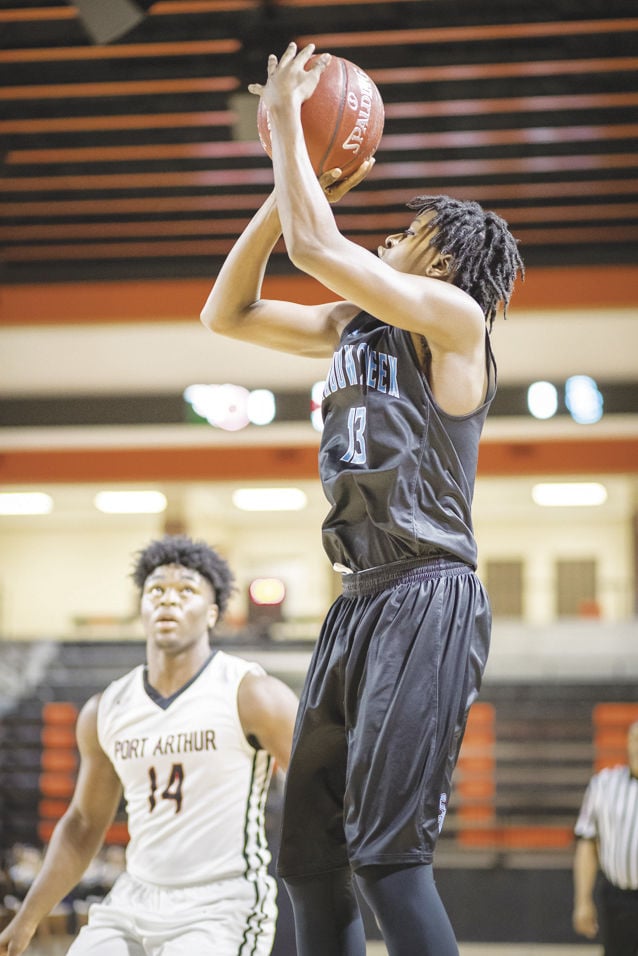 Shadow Creek's Akin Newton (13), who scored a team-high 21 points, takes a three-point shot from the baseline during the first quarter of Friday’s Region III-5A area round boys' playoff contest against Port Arthur Memorial in La Porte. 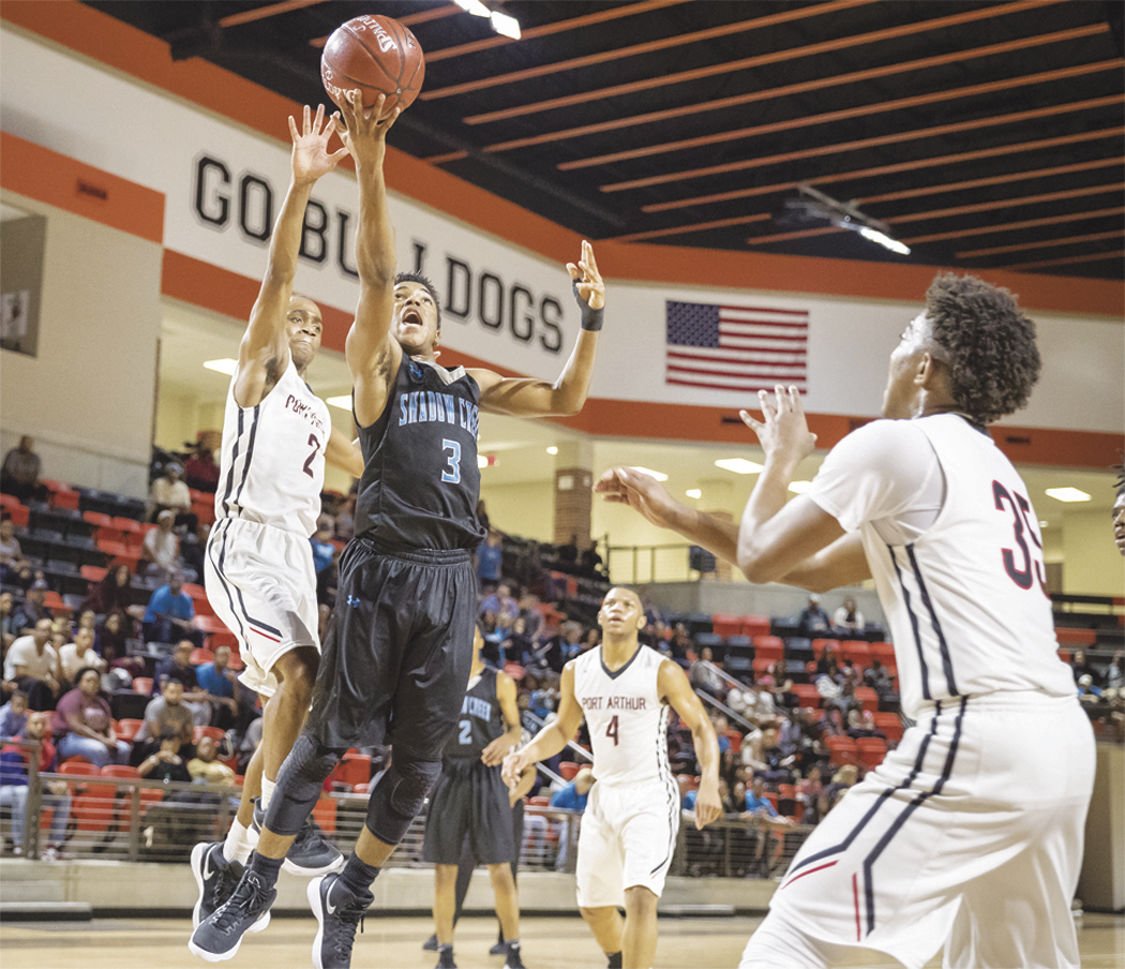 Shadow Creek's Akin Newton (13), who scored a team-high 21 points, takes a three-point shot from the baseline during the first quarter of Friday’s Region III-5A area round boys' playoff contest against Port Arthur Memorial in La Porte.

While Shadow Creek may be the new kid on the block in the Class 5A boys’ basketball playoffs, the Sharks made their initial splash into the postseason a memorable one.

After topping Houston Sterling in the bi-district round earlier in the week, the Sharks gave Port Arthur Memorial all it could handle before the Titans finally pulled away in the closing moments for a 64-57 area round triumph in La Porte.

Shadow Creek, who closes its season at an impressive 23-7, led 47-46 on Simeon Soname’s bucket with five minutes left, but Memorial then went on a 11-2 run for a 57-49 lead with three minutes remaining. Six straight points by Tyron Henry cut the gap to 59-57 in the closing seconds, but the Titans put the game away at the free throw line.

Newton delivered a pair of treys and 10 points during the opening period, while Elliott also hit behind the arc, but Memorial held the upper hand at 19-16 following the initial eight minutes.

The teams then combined for eight lead changes during a roller coaster second quarter. Newton and Kenan Mitchell each provided three-pointers and Elliott’s two free throws gave the Sharks a 31-30 lead with under a minute to play, only to have Darion Chatman immediately converted a lay-up on the other end to give the Titans the upper hand at 32-31 at intermission.

Shadow Creek then opened the second half with back-to-back buckets by Newton and Trey Lightener’s field goal to lead 37-32 with 6:11 left in the third, while Elliott’s jumper increased the margin to six at 41- 35 with two minutes remaining. However, the Sharks committed consecutive turnovers at midcourt in the period’s closing moments, paving the way for Memorial’s Thailan Wesley (game-high 26 points) to hit from both the field and charity stripe and Chatman added a bucket inside to tie the contest at 41-41 entering the fourth.

The Sharks opened the postseasone with a convincing 92-67 bi-district triumph over Houston Sterling Feb. 19 at Delmar Field House in Houston.

In the Sharks’ victory over Sterling, the Raiders initially stayed within striking distance, trailing by 11 at 46-35 at intermission. However, Shadow Creek broke the game open with a 21-9 third-quarter run, which featured back-to-back three pointers by Henry and Newton.

“We knew with our depth, as long as we do what we do defensively, we would give ourselves a chance in the second half,” President said following the game. “They (Sterling) did a great job of breaking the press and getting some easy baskets. We just had to make the adjustments at halftime, which we did.

“We came out aggressive, jumped out on them and made a run. That opened it up for us a little bit.”

Soname got the Sharks’ attack going in the opening period with a pair of rebound dunks and 11 points overall, paving the way for a 23-16 Shadow Creek lead after one period. Blake Johnson scored five points for Sterling in the second period, but the Sharks ultimately increased their advantage to double digits entering the break, thanks to treys by Elliott, Henry and Newton. Shadow Creek then put the game of reach in the third with Henry and Newton doing the damage behind the arc again, while sophomores Lightener and Trey Hartfield also came off the bench to hit field goals. The Sharks took a 74-53 lead into the final period and cruised the rest of the way.

“We’re an inexperienced team, so sure there were some nerves starting out,” President said. “It was the first time for us being in the playoffs and under the big lights. For us to come out and weather the storm and get that first win, it felt good.”

The Alvin and Manvel girls were eliminated in the regional quarterfinal round Feb. 20, while the Manvel boys dropped their bi-district contest the same day.