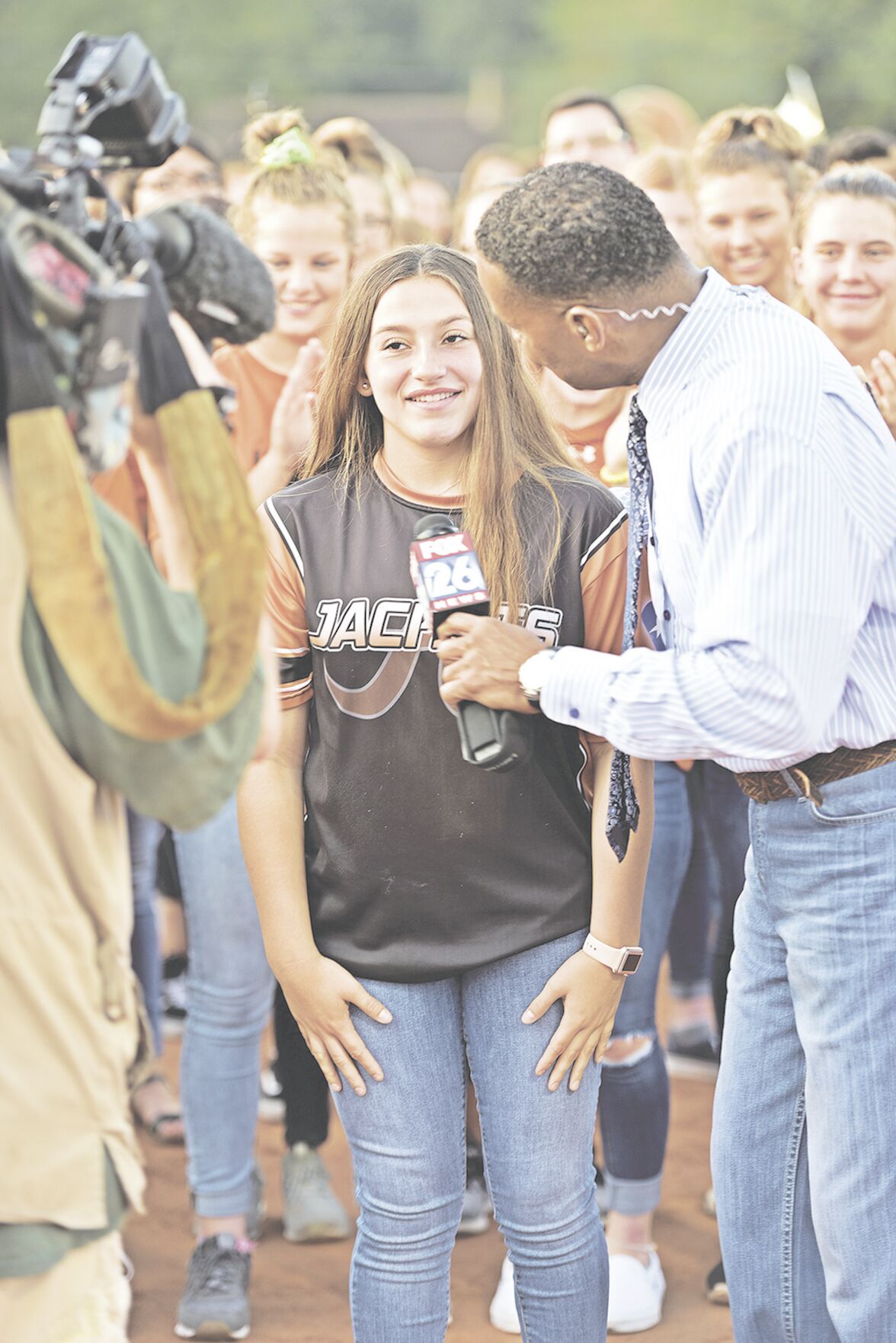 Interviewed here in October during Fox 26's "Making the Grade" segment, Jodie Aguirre has shined both in the classroom with a 6.95 GPA, being named Alvin High School's valedictorian and also on the softball diamond with the Brown University signee breaking Lady Jacket school records for strikeouts and victories in a single season. 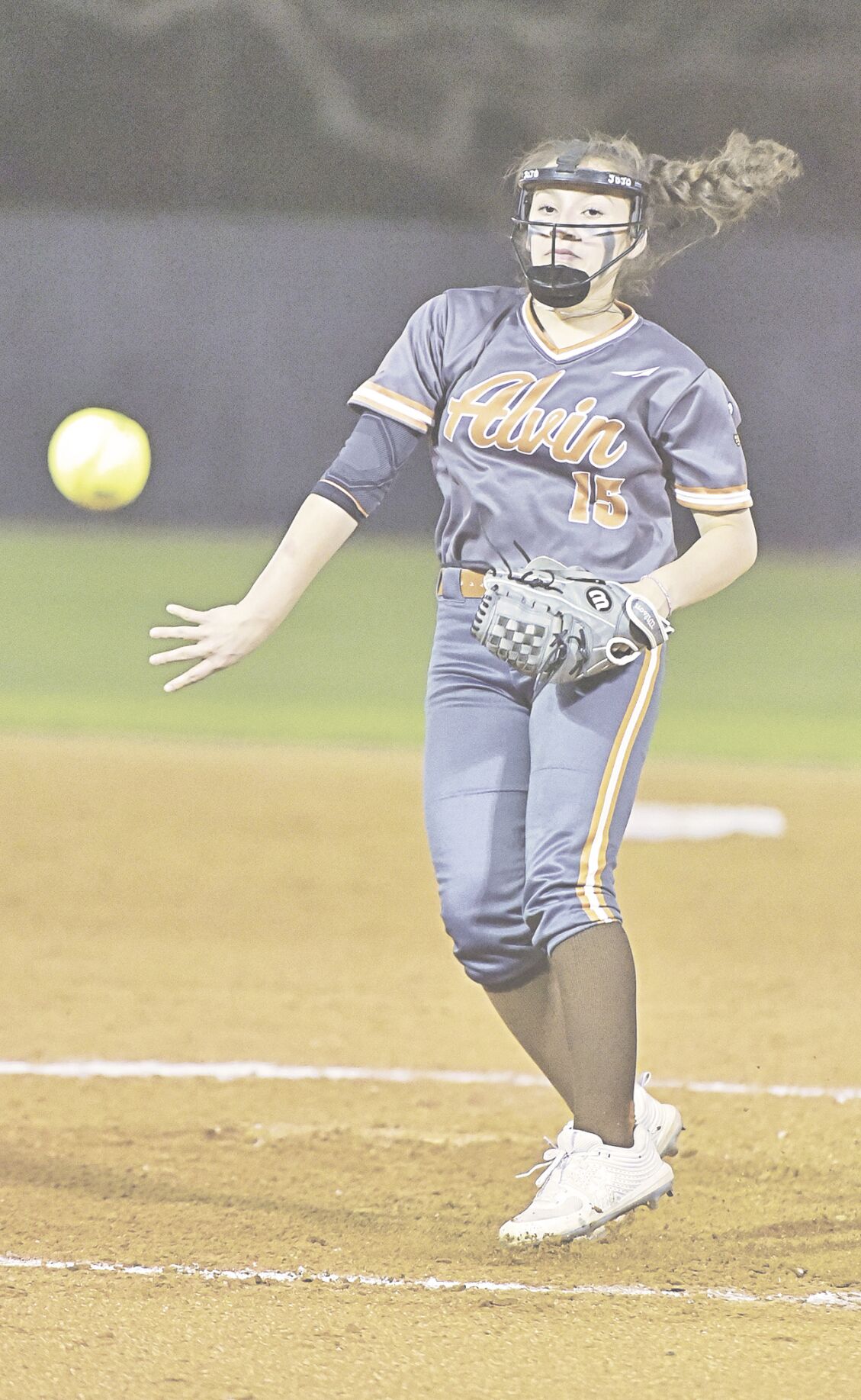 Interviewed here in October during Fox 26's "Making the Grade" segment, Jodie Aguirre has shined both in the classroom with a 6.95 GPA, being named Alvin High School's valedictorian and also on the softball diamond with the Brown University signee breaking Lady Jacket school records for strikeouts and victories in a single season.

Jodie Aguirre was well on her way to another record breaking season in the circle.

Just a month into the 2020 high school softball season, the Alvin Lady Yellowjacket ace led the nation with a sparkling 19-1 record, which also featured a 0.925 earned run average and 149 strikeouts in 106 innings.

Aguirre would gladly trade the individual numbers, though, for her teammates. Due to the Covid-19 pandemic, Alvin was caught in the same predicament other prep programs around the country ultimately had to swallow with the cancellation of their seasons.

“For a while, I had been mentally preparing myself for the season getting cancelled. Even so, when we got the news that our season was over, it hurt really bad,” the All-AISD Lady Jacket Softball MVP said. “We were really looking forward to state. Every game, we had been preparing for that. I know a lot of us shed tears.

“As seniors, we had college to luckily look forward to and our coaches also made us feel better with google hang out meets every week. They did the best they could to make it better, but it still hurt.”

Like their ace, Alvin also appeared on its way to a banner year with the playoff roads pointing towards a potential journey to Austin.

The Lady Jackets busted out of the gate with a 20-1 mark and positioned themselves as one of the early contenders for the Class 6A state title. Maxpreps ranked Alvin as the number one team in the state and No. 2 nationally, while the Texas Girls Coaches’ Association placed the Lady Jackets second in their Class 6A state poll.

With his offense and deep bench dominating opponents regularly, Lady Jackets’ head coach David McCorkle even had the luxury of keeping Aguirre (who was the team leaders in RBI’s with 29 the previous) out of the batter’s box.

“Our offense did so much for us this season,” Aguirre said. “Even during the fall, watching them hit and giving it their all on the field, I knew this was a special team. We had a good chance to go to state.

“I think the tournaments we played in definitely proved that. We played some of the top teams in the state and our offense hit some of the best pitchers in the state. Our shortstop (freshman Reagan Jones) was laying out for balls left and right. I feel like everybody, 1-9 (in the batting order) and even people not getting much playing time were giving their all every single game.

Giving it her all is also an Aguirre trademark, which has led to milestones on both the diamond and in the classroom.

While her 5-1 frame had some coaches suggesting another position during her earlier years, Aguirre simply took it as a challenge. Starting at age 8, she stayed the pitching course and finally got a starting shot in the circle her junior year following the graduation of another Alvin pitching standout, Rachel Hertenberger (now at the University of Houston).

“In the past, I had coaches telling me I wasn’t going to get much playing time,” she said. “I threw too slow and things like that. I even had people telling me that being short was a major setback.

“But I never like to think of it that way. I found a way to overcome my height  with my spin and movement (in her pitches). That was my thing. I never blew the ball past hitters.”

The pitches may not have been blazing by hitters, but that didn’t stop them from making the monumental K and win columns for the Lady Jackets.

Aguirre (who played second base during her freshman and sophomore campaigns) shattered school records for the regional semifinalist Lady Jackets in both strikeouts (350) and victories (34), while the postseason honors included being named 24-6A most valuable player, All-Greater Houston First team, second team all-state by the Texas Sportswriters’ Association and a second team national underclassman selection by Maxpreps.

“I knew I had big shoes to fill,” said Aguirre said, of Hertenberger. “This was my first year of pitching and I was just going to give it the best I could no matter what happened. I was super pumped. I was surprised by how well I did, but not by how my team did. I had played with some of those girls on select ball and knew how talented we could be as a team.”

Aguirre credits her dad Jesse Aguirre, along with McCorkle, Alvin assistant coach Tiffany Neal and Mike Loy, who has served as her pitching coach since age eight for her breakout development in the circle.

“Dad was a catcher in baseball,” she said. “When I told him that I wanted to start pitching, it was perfect because he was a catcher and I was a pitcher, so he’s been my catcher ever since. He’s the one that inspired the passion that I have.

“The coaches were like my second parents. Coach McCorkle had a lot of confidence in me for my offspeed pitches and that’s what a pitcher needs from her coach. We always like to discuss with Coach Neal about her state run (with Alvin in 2008) and she did, but she also made sure that we didn’t automatically assume we were going to state and not let it go to our heads.

“Mike Loy has been my biggest fan and molded me into the pitcher I am today. I’m one of the few people he showed the knuckleball to and it became one of my favorite pitches. People think it’s not the same in softball as baseball, because it’s underhanded, but that’s not true. It’s a great pitch, especially if I sell it well.”

Aguirre carries an equal passion academically with her 6.95 GPA paving the way for being named as Alvin High School’s valedictorian for the 2019-2020 school year. The AHS graduate will be either attending Brown University in Providence, Rhode Island or taking classes online from the institution in the fall, depending on the Covid-19 situation.

“It wasn’t easy as some people may assume,” Aguirre said. “But as far as softball, the coaches and team were all supportive of me trying to be at the top of my class. When I broke the news to them about being named the valedictorian, they were all so happy for me. They congratulated me and the coaches all sent personal messages. It made it easier knowing I had a team that supported me in the classroom, even when it meant me missing a practice to go tutoring.

“There were a couple of times when I felt down and overwhelmed like it was too much, but my dad was a big influencer on me. He was always there to keep me up and push me.”

Aguirre will not only be fulfilling a  goal she’s had since junior high in attending an Ivy League school, she also plans to go to law school after college and has a dream of being on the supreme court someday.

“I want to get into law and become a defense attorney or prosecutor,” she said. “I haven’t decided yet and there is still time. I feel like it’s my calling. To provide a voice to those who don’t have a voice.”

Alvin head coach David McCorkle on Aguirre: “Jodie is a perfect example of Jacket softball and what we want out of our student athletes here at Alvin High School.  She displays an amazing attitude and effort in and out of the classroom and on and off the softball field. Jodie is a class act kid, a kid that I would love my daughters to be like as they grow up.”

Aguirre on attending Brown University: "The coaches are amazing. On top of getting one of the best educations I could ever receive, I will also play (softball) at the Division I level."