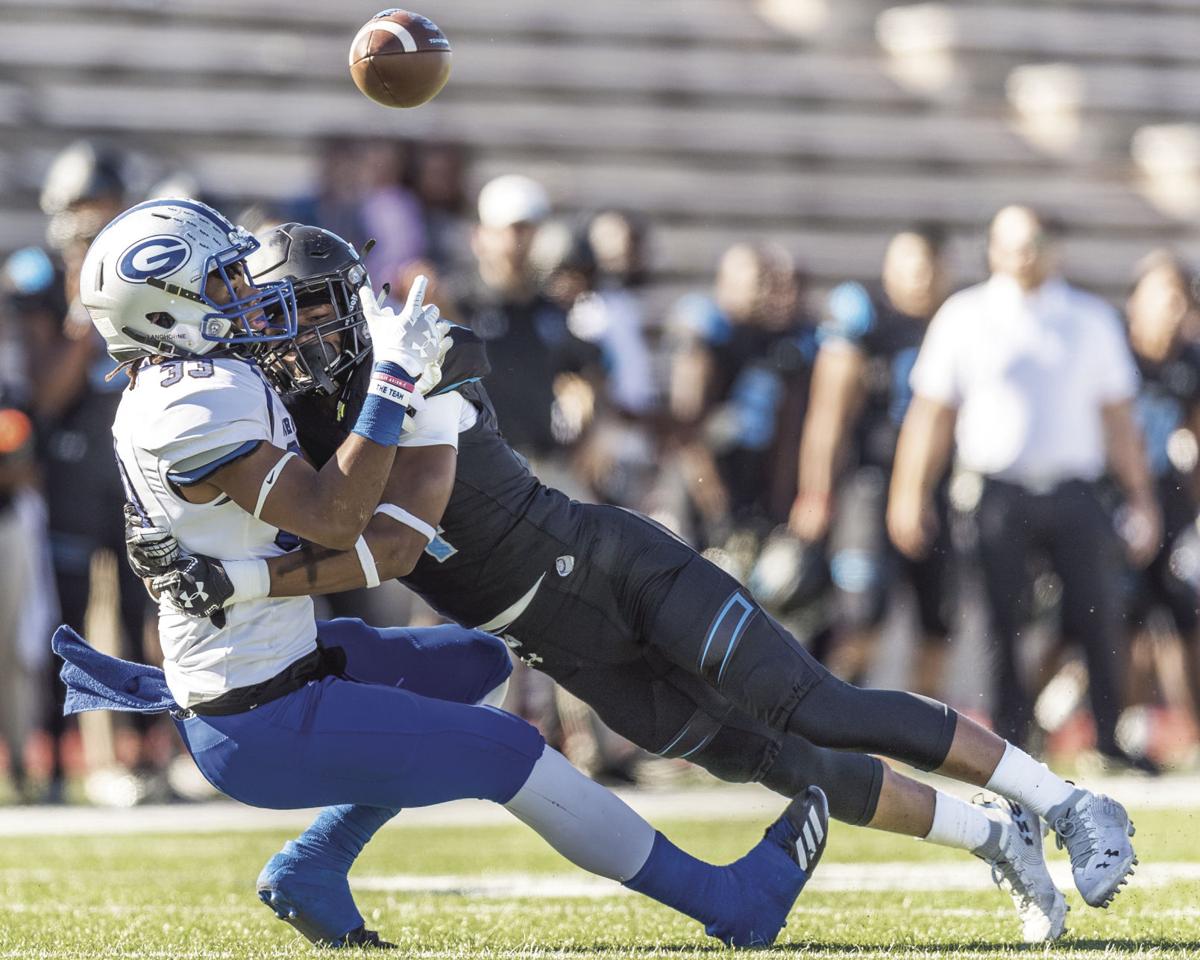 Shadow Creek’s defensive back Xavion Alford (4) levels and dislodges the ball from Georgetown’s wide receiver Andres Langhorne (33) during the Class 5A Division-I Region III Semifinal football game at Merrill Green Stadium in Bryan. The Sharks' defense didn't allow an offensive touchdown and limited Georgetown to 138 total yards in its 36-7 thrashing of the Eagles. The victory sets up a rematch with 10-5A foe Foster on Dec. 7 in Houston. 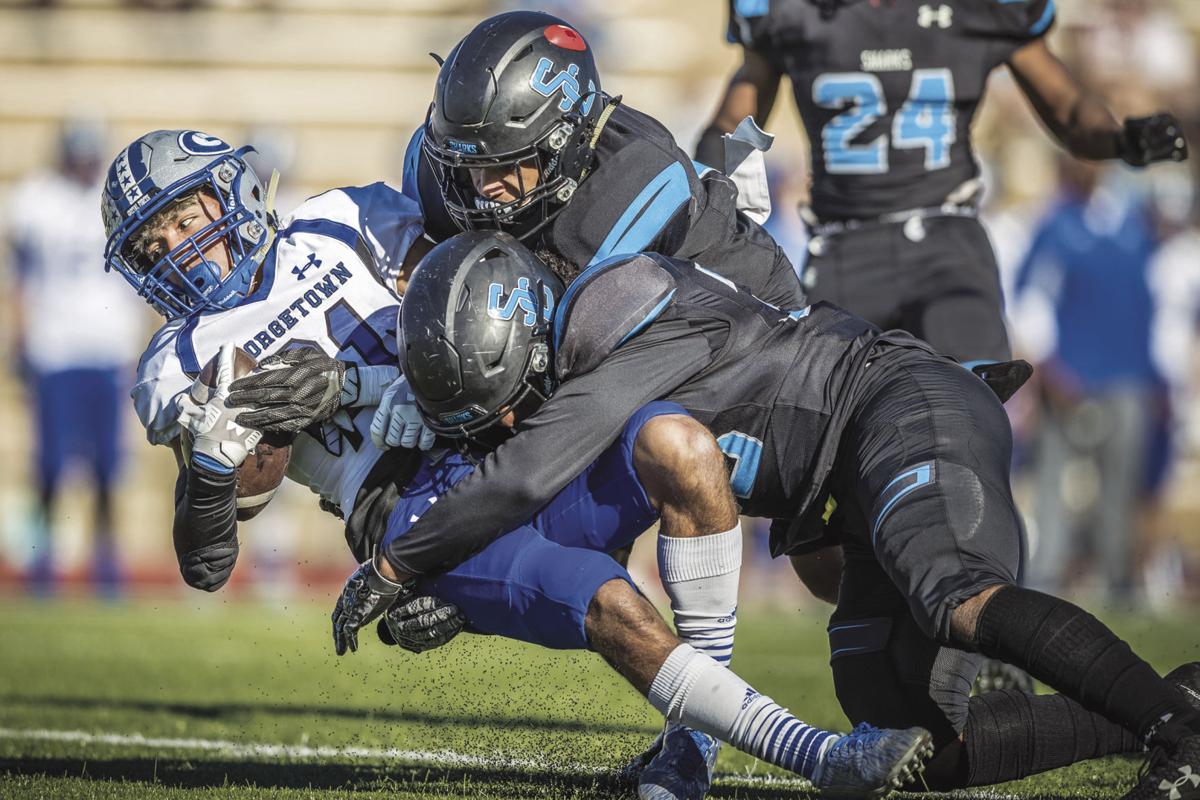 Shadow Creek’s defensive back Xavion Alford (4) levels and dislodges the ball from Georgetown’s wide receiver Andres Langhorne (33) during the Class 5A Division-I Region III Semifinal football game at Merrill Green Stadium in Bryan. The Sharks' defense didn't allow an offensive touchdown and limited Georgetown to 138 total yards in its 36-7 thrashing of the Eagles. The victory sets up a rematch with 10-5A foe Foster on Dec. 7 in Houston.

The Sharks combined a balanced offensive attack with a relentless assault on the defensive side of the ball to thump Georgetown 36-7 at Merrill Green Stadium.

Continuing their incredible inaugural varsity season gridiron run, Shadow Creek improved to 13-0 and will next meet 10- 5A D-1 foe Foster in the Region III Finals on Dec. 7 at the University of Houston’s TDECU Stadium at 2 p.m. The Falcons upset Hutto 41-31 in their region semifinal on Nov. 30.

While 80 yards in first-half penalties and a late first-half turnover for SC near the Eagles’ goal line kept the contest from becoming an immediate runaway, the Sharks ultimately put the game away with back-to-back touchdown drives to open the third quarter.

“I can’t say enough about the intensity they played with today,” Shadow Creek head coach Brad Butler said following the game. “They got after it from the get go and I’m really proud of the effort they put forth.

“It helps us tremendously when the defense puts that type of game together.”

Shadow Creek’s opening drive ended in a missed field goal attempt, but the Sharks’ defense quickly forced a three-and-out, paving the way to a 11-play, 67-yard march for the offense.

George capped the drive with a 6-yard scamper into the end zone and Greg Ezechukwu booted the extra point through the uprights for a 7-0 Sharks’ lead with 2:42 remaining in the first period.

After Shadow Creek’s defense promptly forced another punt, George and company drove 54 yards in 10 plays, also overcoming a total of four flags in the process.

The Sharks faced a third down and 22 from the Georgetown 25-yard line, but George lofted a perfect strike to Kealon Jackson in the right corner of the end zone with 8:29 left in the second quarter to increase the margin to 14-0.

While Shadow Creek managed to dodge a huge bullet with the George-to- Kealon Jackson hook-up, the yellow hankies and the fumble the Sharks committed deep in Eagles’ territory in the first half’s closing moments still managed to keep Georgetown within striking distance at intermission. Following a sack by SC’s Terreance Ellis to halt Georgetown’s first possession in the third, though, Shadow Creek finally started pulled away. Sandwiched between the Sharks’ special teams tackling Eagles’ punter Elijah Clough in the end zone for a safety, Jared Jackson hauled in scoring passes of 29 and 27 yards from George for a 30-0 SC lead.

Nick Petter recovered a Shark fumble in the end zone to help the Eagles avoid a shutout late in the third, but George’s 32- yard TD fling to Greg Hancock in the fourth put the final capper on things.

“We knew we could use our speed against them,” George said. “We started with underneath stuff and then popped it over the top and they couldn’t handle it. The penalties killed us in the first half and we got to fix that. We were kind of beating ourselves.

“But we knocked them down when we got those first two touchdowns in the second half.”

The penalty trend is something neither George or Butler would like to see continued this week against the Falcons in the rematch. In the teams’ other meeting on Oct. 26 in Iowa Colony, Shadow Creek managed to overcome a 27-point second-half deficit to edge Foster in a 35-34 thriller.

“This is what I’ve been waiting for, because everyone thought we were a fluke,” said George, referring to the Oct. 26 game. “I’m just looking to play the best competition. The best thing about it (the rematch) is it being in the regional final. We won’t be looking to do that (having to come back) again.

“We’re on a mission right now.”

Butler: “We both (Shadow Creek and Georgetown) found a way to get here. We had a crazy one there the first time and we know we have our work cut out for us. They do a great job and it will be an exciting ball game.”

SC FOOTBALL NOTES - Ronald Nunnery Jr. intercepted a pass for the Sharks’ defense and Courtney Brown recovered a fumble to stop another drive.